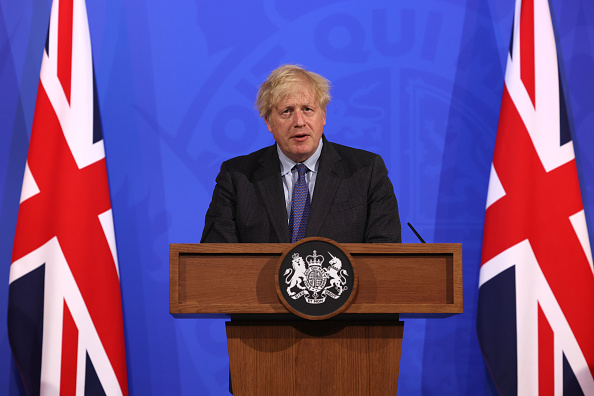 Shrugging off panic buying at petrol stations, bare supermarket shelves and retailers’ warnings of a bleak Christmas to come, the Tory leader said the short-term pain was worth it.

Closing the Conservatives’ annual conference, their first in-person event since 2019 because of the coronavirus pandemic, Johnson was on characteristically bullish form with an array of partisan zingers hurled against the opposition Labour party.

There was little new policy detail in the 45-minute speech, save for a “levelling up” premium to recruit maths and science teachers in disadvantaged areas, and promises of a new programme of road and rail infrastructure in Labour’s former stronghold in northern England.

More broadly, Johnson framed a narrative that the UK’s departure from the European Union presents a historic opportunity to remake the country.

“We are dealing with the biggest underlying issues of our economy and society, the problems that no government has had the guts to tackle before,” he said.

“We are embarking now on the change of direction that has been long overdue in the UK economy,” he added, vowing no return to the pre-Brexit model of “uncontrolled immigration”.

Instead, British businesses will have to invest in their workers and technology to push the country “towards a high-wage, high-skill, high-productivity economy”.

But Johnson warned it will take time to transition.

In the meantime, the government has grudgingly agreed to a limited number of short-term visas to lure truckers and poultry workers from eastern Europe.

For opposition parties and poverty campaigners, Johnson’s commitment to “levelling up” unequal growth also jars with the ending of a weekly boost to benefits for the lowest-paid workers.

Johnson’s attempt to draw a line between his administration and previous governments which lacked “guts” overlooks the fact that the Conservative party has been in power since 2010.

In contrast, chancellor Rishi Sunak — seen by many observers as the heir apparent to 10 Downing Street — is stressing continuity with the Tory tradition of fiscal rectitude.

Sunak featured prominently in a pre-speech video played to the Conservative members awaiting Johnson’s speech, and he has been mobbed by fans at this week’s conference in Manchester, northern England.

The government blames the acute labour shortages afflicting the UK economy not on its hardline approach to Brexit but on the coronavirus pandemic.

But the supply crisis risks undermining themes that Johnson emphasised in his conference speech, including “Global Britain” after the EU divorce.

He touted a new defence alliance with Australia and the United States dubbed AUKUS, which has infuriated France after Canberra cancelled a lucrative contract for French submarines.

“I know that there has been a certain raucus squawkus from the anti-AUKUS caucus,” Johnson joked.

“But AUKUS is simply a recognition of the reality that the world is tilting on its economic axis and our trade and relations with the Indo-Pacific region are becoming more vital than ever before.”

Johnson also talked up Britain’s action on climate change and the need for global coordination, ahead of convening the two-week COP26 climate summit from October 31.

The gathering in Scotland’s biggest city Glasgow will be the “summit of our generation”, he said, but he was light on any new detail for Britain’s net-zero ambitions.

Rather, the four-day Tory gathering saw photo opportunities with e-bikes and zero-carbon housing.

Sunak said on Monday it would be “immoral” to bequeath pandemic-driven debt to future generations, but made no mention of saving those generations from a burning planet.

The omission was a “damaging sign” ahead of COP26, commented Rebecca Newsom, head of policy for Greenpeace UK.

In contrast, the B-word — Brexit — has been a recurrent theme for Tory delegates, adamant that current problems associated with the EU split will pass.

Home secretary Priti Patel used her own conference speech on Tuesday to promise tougher action against climate protesters who have been blockading roads around London.

But his COP26 president, Alok Sharma, denied the party was soft-pedalling climate change with less than a month to go before he welcomes delegates from around the world to Glasgow.