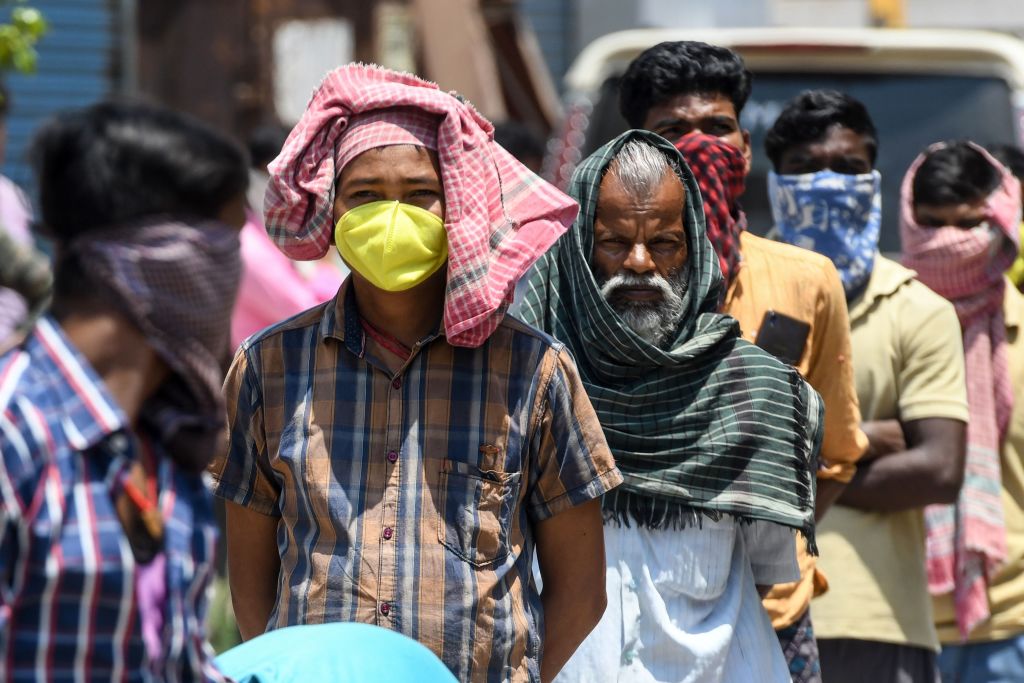 Migrant workers wait on marked areas on the ground to maintain social distancing as they queue to receive food packets at an industrial area during a government-imposed nationwide lockdown as a preventive measure against the COVID-19 coronavirus, in Chennai on April 1, 2020. (Photo by Arun SANKAR / AFP) (Photo by ARUN SANKAR/AFP via Getty Images)

Hundreds of thousands of cash-starved Indian small businesses have either deferred or cut their workers’ wages this month, say industrialists and union leaders, amid a 21-day nationwide lockdown to stem the spread of the coronavirus pandemic.

All India Manufacturers Organisation (AIMO)- an industry body representing some 100,000 small manufacturers – said more than two-thirds of its members faced problems in paying salaries on Tuesday, the usual day for paying monthly wages.

“We have no funds to pay wages,” said K.E. Raghunathan, former national president of AIMO, who runs a solar parts’ manufacturing unit in the Southern Indian city of Chennai.

“Our first priority is to pay electricity bills, rent, bank loans and social security contributions of employees,” he said, adding that they faced delays in payments from clients, including the government.

India’s nationwide lockdown, set to end April 14, has left millions of migrant workers stranded without any other source of income. And officials have warned that some states may extend the lockdowns as coronavirus cases rise.

India has so far recorded more than 4,200 coronavirus cases a death toll of 114 people.

Beyond delayed payments, Indian exports have also been hit by the pandemic, and companies have faced over 50 per cent cancellations in orders, said Ajay Sahai, director general of the Federation of Indian Export Organisations (FIEO), nearly half of whose members are small businesses.

Among the worst hit are lifestyle products such as carpets, handicrafts and apparel, he said.

Small businesses account for nearly one-quarter of India’s $2.9 trillion economy and employ more than 500 million workers, according to government estimates.

Amarjeet Kaur, national general secretary of All India Trade Union Congress, estimates that more than 5 million workers have suffered a partial or full loss of wages.

India’s unemployment rate rose to 10.4 per cent this week from 7.2 per cent in early February, according to estimates by Centre for Monitoring Indian Economy, a Mumbai-based private think-tank.

Even workers who were able to access some government relief this week faced delays at banks.

On Tuesday, outside a Punjab National Bank branch in Agra, more than 100 people, mainly women, were queuing for a 500 rupee ($6.60) subsidy granted by the government during the lockdown.

“I need this to feed my children,” said Gyan Devi, a labourer. “Something is better than nothing.”