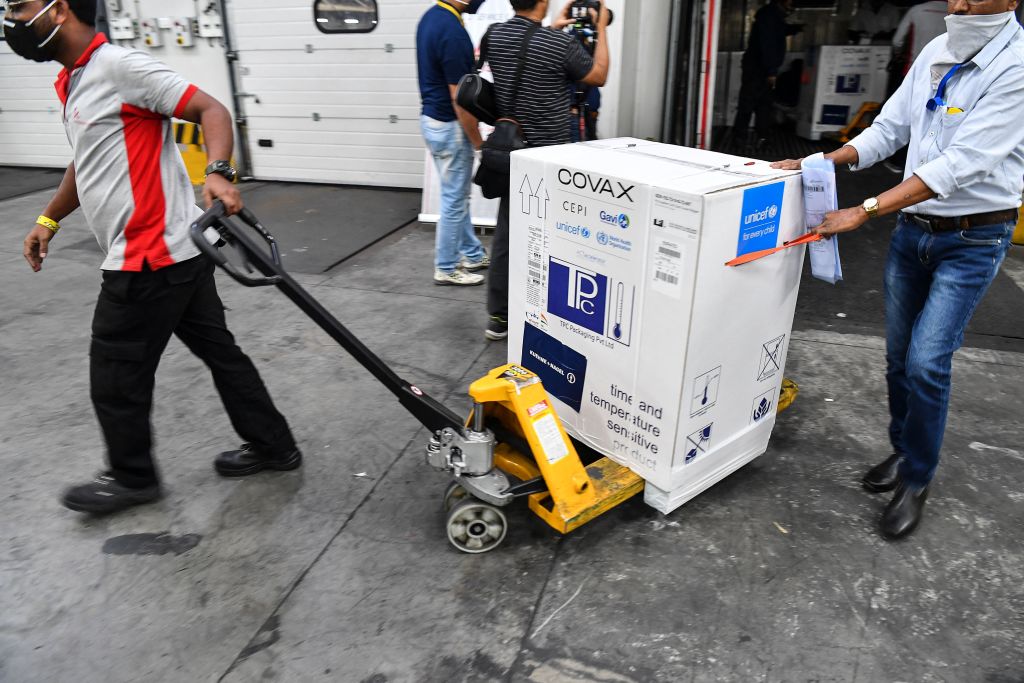 FILE PHOTO: Airport staff unload carton boxes of Covishield vaccine developed by Pune based Serum Institute of India (SII) at the Mumbai airport on February 24, 2021, as part of the Covax scheme. (Photo by INDRANIL MUKHERJEE/AFP via Getty Images)

THE world’s largest vaccine maker Serum Institute of India has resumed exports of Covid-19 shots, it said, in a boost for poorer countries that have struggled to secure supplies.

The shipment to Tajikistan under the COVAX vaccine-sharing initiative agreement was the company’s first in seven months.

“This will go a long way in restoring vaccine supply equality in the world,” tweeted billionaire chief executive Adar Poonawalla.

“It’s a huge moment to begin exports again, for us, our partners at COVAX and the low- and middle-income countries we support,” he added in a separate statement.

India blocked vaccine exports in April as it struggled to combat a vicious second wave of coronavirus infections and vaccine shortages of its own.

Those restrictions were lifted Friday (26), according to reports.

Under COVAX, the world’s 92 poorest countries can access inoculations for free, with donors covering the cost.

The Serum Institute of India plant in Pune was intended to be the early backbone of COVAX’s supply chain, but was prevented from fulfilling its commitments due to the export ban.

The exports saw Serum surpass its target of producing one billion doses of Covishield — its version of the AstraZeneca jab — before the end of the year.

“Covishield remains an important product which has the potential to help us protect hundreds of millions of people in the months ahead,” said Seth Berkley, CEO of the Gavi vaccine alliance, which leads COVAX.

“The resumption of supplies from Serum Institute is an important development for COVAX as it enters its busiest period yet for shipping vaccines.”

India has administered over 1.2 billion jabs to its citizens — 38 per cent of its eligible population receiving two doses — while Covid-19 infections in India have fallen to a March 2020-low in recent weeks.