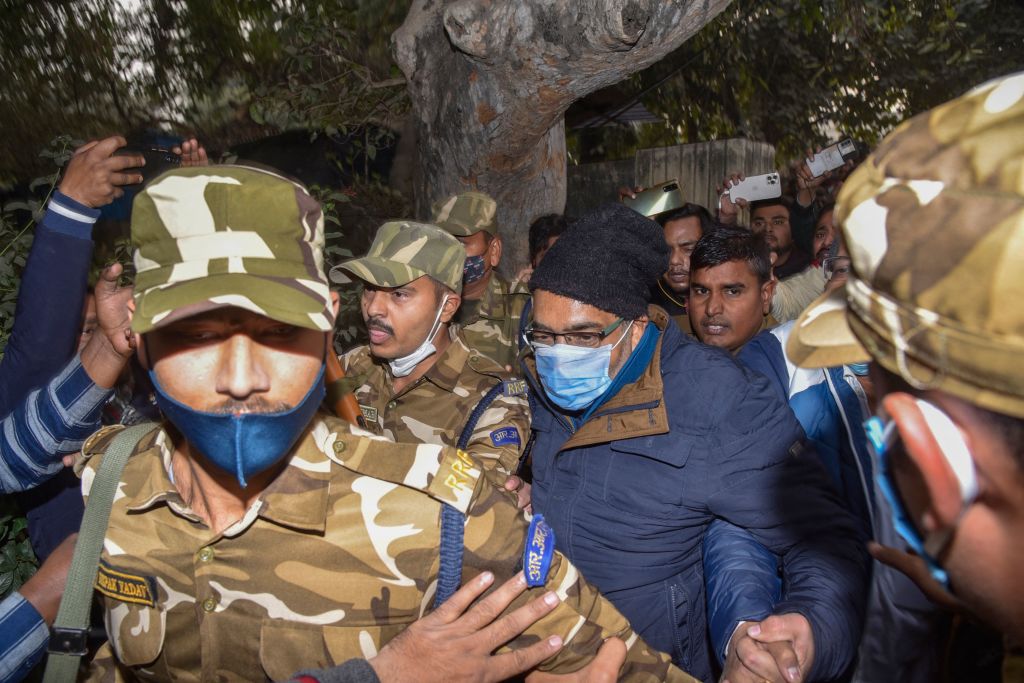 In this picture taken on December 27, 2021 Indian businessman Piyush Jain (C) is being escorted by security personnel to be produced at a court in Kanpur. (Photo by -/AFP via Getty Images)

INDIAN tax officials have seized nearly £26 million in banknotes stashed in buildings belonging to a perfume tycoon in Uttar Pradesh, The Times reported.

The haul recovered from the businessman also included 23kg of gold, 250kg of silver and drums of sandalwood oil worth £750,000.

The businessman was identified as Piyush Jain, 52, whom neighbours described as leading a “simple life,” wearing rubber sandals and riding around town on a dilapidated scooter, the report added.

Vivek Johri, chairman of the Central Board of Indirect Taxes and Customs, has said that it was the biggest recovery in its history.

“We knew he was doing well in business but the quantity of notes recovered have left us stunned,” a neighbour told The Hindu newspaper. He also described Jain as “a wonderful human”.

According to neighbours, Jain never flaunted his wealth and even his lifestyle was very middle class. Jain was religious and had helped to renovate two temples of Jain, they said.

Jain’s main home in Kanpur was described by media as a “warehouse of money” with banknotes “spilling out of the walls”. Video of police counting stacks of money went viral on the internet, The Times report added.

Authorities who raided Jain’s homes, his factory and offices on December 22 were said to be using 19 cash-counting machines.

Despite the money being found in Jain’s properties, it may not belong to him. Inquiries point to a company that makes pan masala, which was said to be operating without paying taxes. It was alleged that Jain was paid a commission to hide its profits.

Johri said his tax team “started searches of the manufacturer of pan masala and their supplier” and this led to Jain’s companies, known as Odochem Industries. Fake invoices were also found which suggested two or three parties were involved in the fraud, The Times report further said.

Jain and his lawyers have not commented on the allegations, but local journalists say he told the tax investigators that he accumulated the cash after selling an inheritance of 400kg of gold.

“Jain said he sold gold in batches, for the past many years, to small jewellers,” IANS news agency quoted a tax officer as saying.

Jain is being held in custody while investigations continue but politicians are already trying to score points over the matter, the newspaper report added.

Modi’s Bharatiya Janata Party (BJP) tried to link Jain to a rival party, while opposition leaders pointed to the seizure as proof that Modi’s withdrawal of nearly 90 per cent of banknotes in 2016 — an attempt to root out black money or cash gained through illegal means — had been “a farce”.

Ahead of spring elections, the government has carried out a string of tax raids on opposition party figures in Uttar Pradesh, whose population of 200 million people makes it a key electoral battleground.