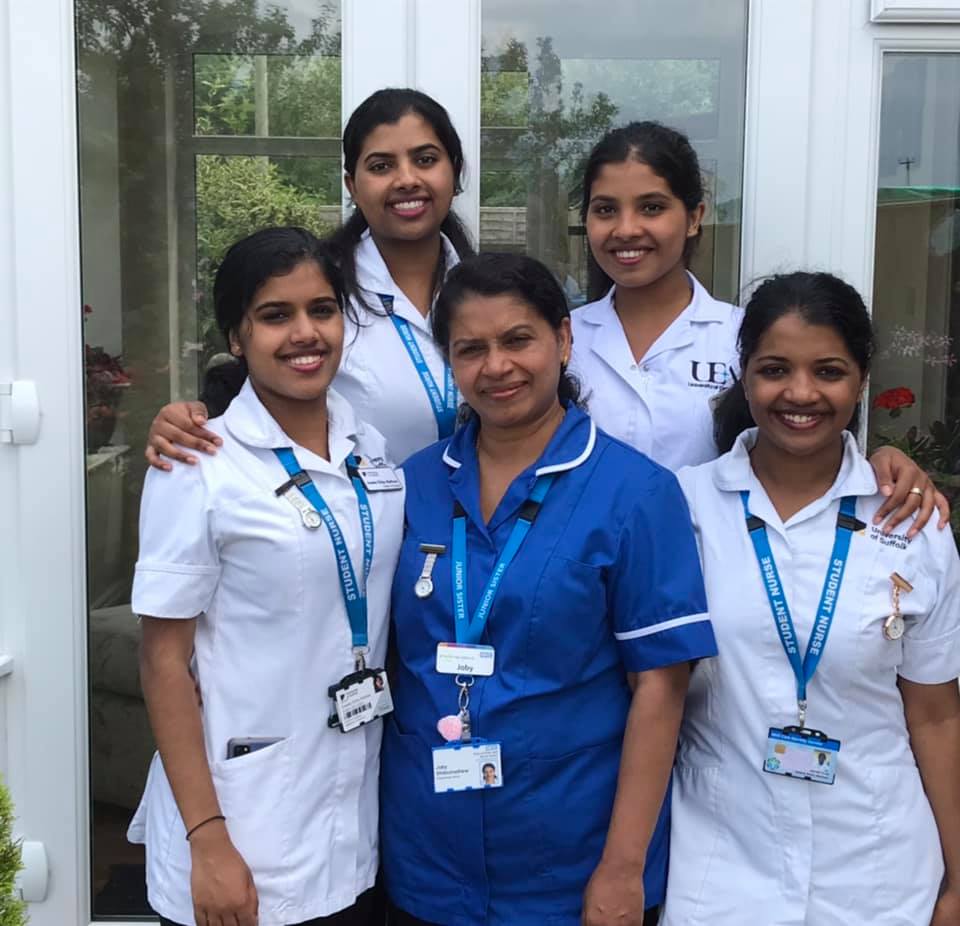 A FAMILY of British Indian quadruplets have described why they think the UK is the best place to achieve their dreams.

The Framlingham, Suffolk-based quadruplets – Aneetta, Anjel, Aleena and Aneesha – told Eastern Eye they are proud of working in the NHS, where they are following their mother’s footsteps.

Aneetta, Anjel and Aleena, 21, are now nurses at Royal Papworth Hospital, while physiotherapist Aneesha works for the NHS at Kettering Hospital. All four completed training placements at Ipswich Hospital, Suffolk.

Their mother Joby Shibu Mathew now works in the oncology department of the hospital.

The sisters started their official jobs last month, and according to their father, Shibu Mathew, a maintenance engineer, his daughters will be the only quadruplets who are all working for the NHS.

“It is a great feeling that we are working at the same place. A unique experience as you have someone you know at your workstation. It makes work easier and you can always share everything,” Anjel told Eastern Eye.

When they were in their second year of studies, the Covid-19 pandemic took hold in the UK.

“It gave us a unique experience as healthcare professionals. In April 2020, it was almost like we were cut off from the rest of the world. By June we also started to do work as part of our studies. It was work without any pay,” she said.

“Initially, we were scared as wearing PPE and a face shield was a novel experience for us. Our parents were really helpful at the time.

“Our mother gave us guidance and motivation to overcome that difficult phase. After the initial struggles, we were able to adapt quickly. Moreover, the Covid experience had given us more courage and confidence.”

The sisters said the healthcare profession could be challenging, with long working hours. However, they added, “The feeling that your skills are making a difference to people is really rewarding. We often try to be different and we seem to end up choosing the same thing.”

Originally from Kayamkulam in Kerala, their parents moved to the UK in 2007, leaving the girls with their extended family in India. The quadruplets were born when their mother was working as a nurse in Oman in 2000.

“When my mother came to the UK, she was unable to use her overseas health qualification. So, she started working as a healthcare assistant in a nursing home,” Anjel said.

“But she was very persistent and hard-working. She studied here and it took her seven years to become a nurse in the NHS. We have all seen her struggle and her dedication to the goal. Her story inspired us to pursue a career in NHS.”

The siblings joined their parents in the UK after finishing their pre-school and first grade in Kerala. They visit relatives in Kayamkulam every two years. Their last trip was in 2019 and because of the Covid pandemic they couldn’t travel this year, so they plan to do so in 2022.

Asked about their experience in the UK, Anjel said, “it’s my home”. She will only be away for three weeks in two years from the country.

“We have moved at a very younger age to the UK. So, we felt very much at home here. When we moved to the UK, though there were Malayali families in our area, there were none in our age group. We four will always be together and we made friends here. So, it was a great learning and growing experience,” she said.

Anjel, who wants to specialise in cardiology, believes Britain allows people to achieve more “because of its positive environment”. She said she had not faced any discrimination in her life or work because of her Indian heritage.

The siblings speak Malayalam and are active in programmes conducted by the regional associations in the UK.

Talking about the differences in the work environment for them when compared to how it was for their mother, Anjel said, “Our mother struggled a lot more than us. Right from learning English, she had to work hard. Though the nature of the work and culture are the same, healthcare is improving every day.

“Changes are happening when we deal with patients. Our mother is in a kind of managerial role, so she has more responsibilities. As junior sisters, our roles are limited,” she said.