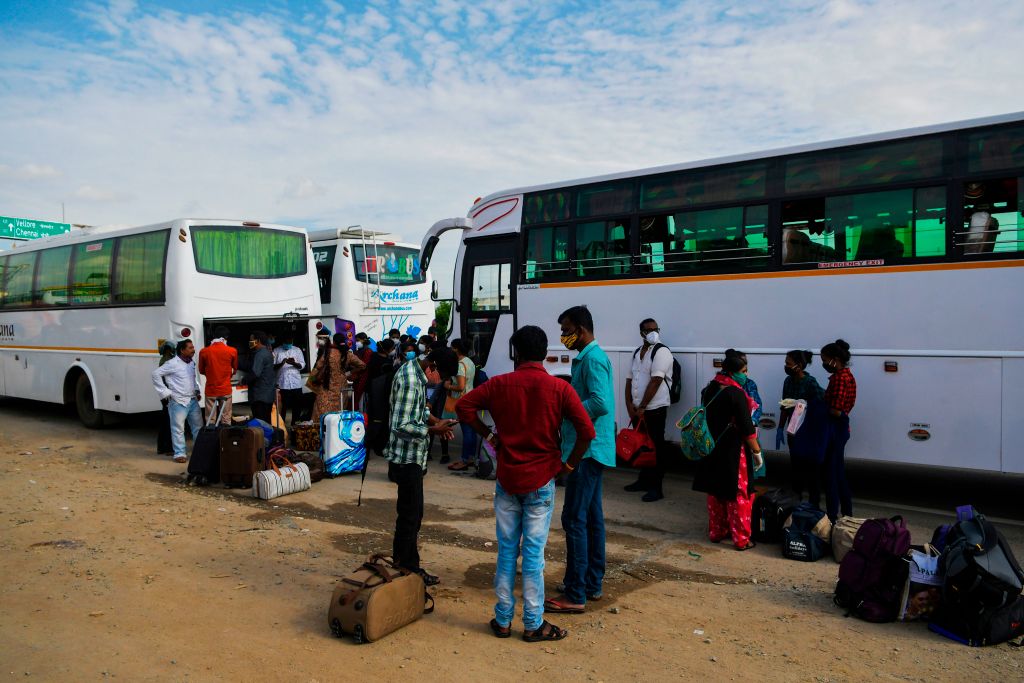 People wait to board buses and return to their home towns at the Karnataka-Tamil Nadu state border on the outskirts of Bangalore on July 13, 2020, as another lockdown is underway in Bangalore in an attempt to contain the surge of COVID-19 coronavirus cases. (Photo by MANJUNATH KIRAN/AFP via Getty Images)
Follow Us

INDIA’s IT hub Bangalore will go back into lockdown Tuesday (14) as the number of coronavirus cases in the country surged towards a million with about 500 people dying daily.

After imposing one of the world’s strictest lockdowns in late March, India has been steadily easing rules to lessen the huge economic impact.

But infections have continued to soar, passing 900,000 on Monday (13) with almost 24,000 deaths, according to health ministry figures that many experts say underplay the severity of the situation.

Mumbai and the capital New Delhi have been the worst hit so far but the southern city of Bangalore, home to more than 13 million people, has emerged as a new hotspot.

A seven-day lockdown in the city is set to begin at 8:00 pm (1430 GMT), the government announced earlier. Transport will be banned except for emergencies and only shops selling essential items allowed to open.

Firms in Bangalore’s lifeblood IT sector handling the back-office operations of global corporations can operate, but with only 50 percent of staff allowed on premises at any one time.

A new lockdown has also been imposed in the western city of Pune, which on Monday reported a record 1,333 new infections, taking the total to 40,000 with 23 deaths.

Other states including Uttar Pradesh, India’s most populous with 200 million inhabitants, Tamil Nadu and Assam have also introduced new restrictions.

Kerala in the south, which earlier won plaudits for its handling of the pandemic, has also implemented tight controls in around a dozen areas including state capital Thiruvananthapuram until July 23.

The state has seen cases shoot up to over 8,000 following the return of people from Gulf countries where Keralites make up a substantial proportion of foreign workers.

Kerala’s communist-led government last week extended until July 2021 rules on the wearing of masks, social distancing and limiting numbers of people at weddings and funerals.

In a glimmer of hope, Delhi, which apart from several “containment zones” has seen activity return to normal, on Monday reported 1,246 new infections — the lowest in 35 days.

The crowded megacity’s government, which has struggled with overflowing hospitals and morgues, has put on hold plans to turn sports stadiums into coronavirus care centres.

“If a successful battle against coronavirus has been fought anywhere in the world, it is in India,” Home Minister Amit Shah said on Sunday, saying the country was in a “good position”.