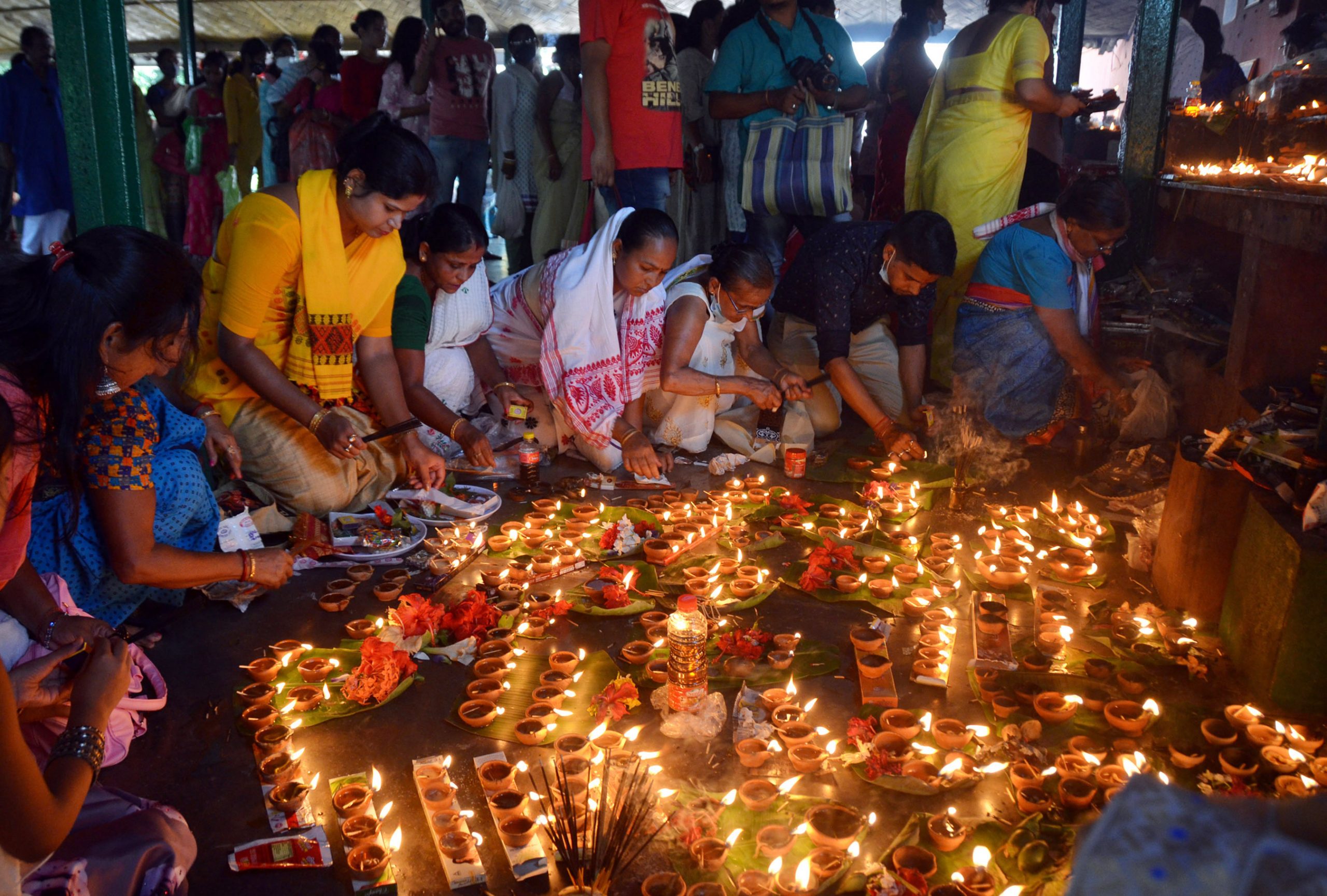 Assam,Oct 13 (ANI): Devotees light up diyas on the occasion of Maha Ashtami of Durga Puja festival at the Historical Bhairavi Temple, in Tezpur on Wednesday. (ANI Photo)

India’s main religious festival season is back in full swing with huge noisy crowds thronging markets and fairs for the first time in two years, barely six months after a devastating Covid-19 surge.

The coronavirus is still claiming over 200 lives daily in the nation of 1.3 billion people but that is down sharply from the 4,000 fatalities in April and May.

Most activities are back to normal and India has administered almost a billion vaccine doses, with around 75 percent of people receiving at least one shot.

It is also the time when people splurge on dresses, sweets, cars and other consumer goods — vital for fuelling the battered economy, the world’s sixth-biggest.

In Kolkata on Thursday, crowds flocked colourful “pandals”, temporary structures where idols of the Hindu goddess Durga are installed during the festivities.

The spectators jostled for a glimpse of a 145-feet (44-metre) high pandal designed as a replica of Dubai’s Burj Khalifa skyscraper, complete with a dazzling laser show.

Traffic police in the West Bengal state’s capital used loudspeakers to remind people about physical distancing, but in vain, although many people wore masks.

“It’s festival time so people will come and people will enjoy. Now there are no restrictions, the government has allowed us (to celebrate) so we are enjoying out here,” Aradhana Gupta told AFP.

Another reveller Riya Tai rued how she could not celebrate the festival last year when strict virus restrictions were in place.

“I am feeling happy (this time) although the crowd is excessive. I am sweating like hell but still I am enjoying it,” she said, amid the beating of drums and Bollywood music blaring from speakers.

The neighbouring states of Bihar and Assam have also witnessed huge festival crowds as have the western states of Maharashtra and Gujarat.

On Monday, Prime Minister Narendra Modi’s government kicked off a campaign dubbed “Mission 100 Days”, with fears that the long festive season could see a resurgence of Covid-19.

“We are asking states to be extra vigilant during the next 100 days, and ensure that Covid-appropriate behaviour is observed,” a government official was quoted as saying by the Hindustan Times newspaper.

“Only then we will be able to save the country from an expected surge in cases.”

Community health expert Rajib Dasgupta said the high coverage by the first vaccine doses was likely to protect the country from a new surge, unless a highly transmissible variant emerges.