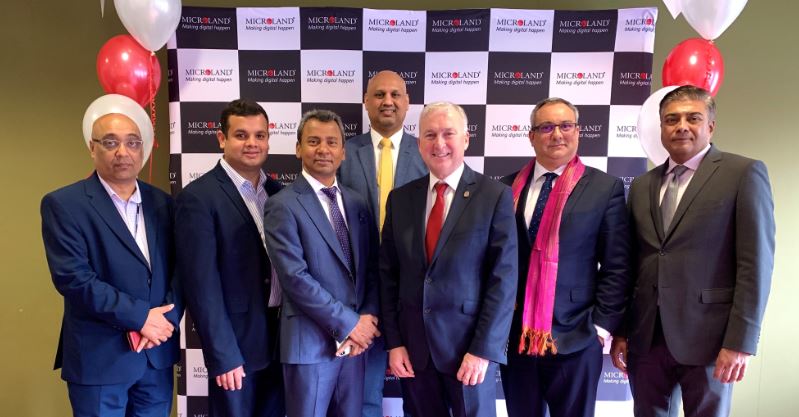 The launch of Microland’s new European headquarters in West Midlands in February 2020.

INDIA is among the top sources of overseas investment in the UK’s West Midlands region which includes Birmingham, Coventry and Wolverhampton cities.

The region secured 157 projects in the 2019-20 financial year, accounting for eight per cent of the UK’s total.  The USA, Germany and France are other prominent sources of investment, stated the data from the UK government’s Department for International Trade (DIT).

A total of 3,883 new, associated jobs were created and 2,220 additional jobs were safeguarded in the region during the period.

This is the fifth year that the West Midlands has remained the most popular UK region for attracting FDI outside of London and the South East.

Indian IT firm Microland is one Indian investors to have found success in the region. The new European headquarters of the company was opened in February 2020 in Birmingham, marking its second investment in the West Midlands in two years.

German firm ACSYS Lasertechnik in Coventry, Italian-owned chemical manufacturer MAPEI UK in the Black Country and India’s Microland are the major investment projects in the region. Investments were made in advanced manufacturing, automotive, software and computer services and business and consumer services.

“Despite a period of unprecedented trade disruption globally, the region’s inherent industry strengths and critical mass of talent have assured our ability to successfully compete on the world stage,” said Matt Hammond, chair of the West Midlands Growth Company and Midlands region chairman at global consultancy PwC.

“From my own experience of increasing PwC Midlands’ investment in the region, I have witnessed first-hand how the West Midlands can help international organisations to grow and scale at pace, with cost-competitive facilities, a diverse range of resilient industries and vibrant cityscapes that are rivalling London on quality of life.”

“Setting up Microland’s offices in the West Midlands has facilitated a virtuous cycle of growth for our organisation. The success of our initial investment in 2018 cultivated the demand for a new Microland European operational centre, driven by the region’s thriving technology ecosystem and high-skilled talent pipeline,” said Nagaraja Kini, associate vice president at Microland.

“The West Midlands has a number of exclusive opportunities on the horizon that will give us a uniquely competitive edge, such as the region’s status as the UK’s primary multi-city 5G testbed. This facility will allow unprecedented access to trial and test new technologies and products at scale, putting us at the epicentre of the next digital revolution.”

The region’s Tech and Digital cluster is one of several priority sectors identified within its investment strategy for the 2020-21 financial year.

Central to both the region’s recovery and investment plans is accelerating and maximising the benefits of key milestones such as HS2 and the 2022 Commonwealth Games, an official statement said.