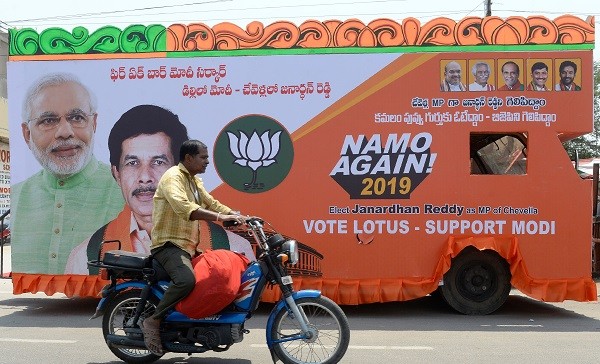 An Indian man rides a motorbike past an election campaign vehicle of the Bharatiya Janata Party (BJP) ahead of the forthcoming national elections in Hyderabad on March 27, 2019. – India is not just the world’s biggest democracy, its elections are also the most gruelling — with nearly six weeks between the first round of voting on April 11 and the last. (Photo by NOAH SEELAM / AFP) (Photo credit should read NOAH SEELAM/AFP/Getty Images)
Follow Us

INDIA’S frenetic cities, historical monuments, tasty food, and beautiful scenery may be among the biggest attractions for foreign tourists.

But with election fever hitting India, a few of them are prepared to forgo some of that – and the elephant ride – to meet an election candidate or attend a political rally.

The world’s biggest democracy, with about 900 million voters, is set to decide in April-May whether prime minister Narendra Modi gets a second term following his thumping victory in 2014, and that gives the Indian tourism industry a different way to market the country.

Some Indian tour companies are courting international visitors with week-long ‘election tourism’ packages that would try to combine some traditional sightseeing with access to political campaigning.

The packages were first tested during the 2012 state elections in the Western state of Gujarat and have now mushroomed nationwide.

“The Indian election is like a festival,” founder of Election Tourism India and chairman of Gujarat Tourism Corporation Society Manish Sharma said.

Election campaigns and rallies in India can be spectacular in terms of scale, reflecting the power of fundraising for the state and national political parties.

The Ahmedabad-Gujarat based Election Tourism India, which works with more than 35 tour companies across India, has received nearly 3,500 bookings for election packages from outside India, he said.

The packages consist of popular tourist destinations, political rallies and interactions with election candidates and other local politicians. The length of the election – it takes more than five weeks for everyone to be able to vote – also provides tour operators with plenty of options.

The trips offered range from five to eight days, and offer visits to a wide variety of places.

The packages are not expected to appeal to the average tourist but more for those who are inclined in politics, such as political students, journalists and researchers.