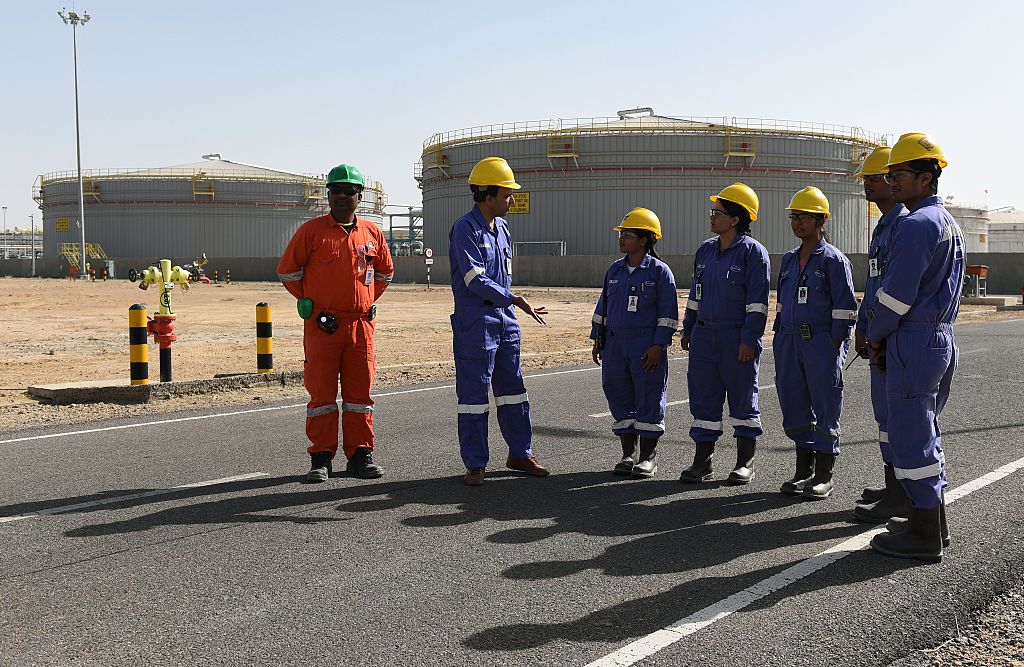 In this photograph taken on December 11, 2015, employees interact with each other at the Cairn India, Oil and Gas exploration plant at Barmer in Rajasthan, India. (Photo by MONEY SHARMA/AFP via Getty Images)

MOVING quickly towards ending a retrospective tax dispute with Cairn Energy plc, the Indian government has accepted the British company’s undertakings that will pave the way for refunding its taxes, sources said.

Meeting the requirements of the new legislation that scraps retrospective taxation, the company had earlier this month given undertakings indemnifying the government against future claims as well as agreeing to drop any legal proceedings anywhere in the world.

The government has now accepted this and issued Cairn a so-called Form-II, committing to refund the tax collected to enforce the retrospective tax demand, two sources with direct knowledge of the development said.

Following the issuance of Form-II, Cairn will now start withdrawing all cases in international courts.

Once this is complete, the company will be issued a Rs 79 billion (£789 million) refund, they said, adding the withdrawal of cases may take up to three-four weeks.

While a Cairn spokesperson did not immediately respond to requests for comments, a senior finance ministry official confirmed the government accepted the company’s undertakings.

Seeking to repair India’s damaged reputation as an investment destination, the government in August enacted new legislation to drop Rs 1.1 trillion (£10.99 bn) in outstanding claims against multinationals such as telecom group Vodafone, pharmaceuticals company Sanofi and brewer SABMiller and Cairn.

About Rs 81 bn (£810m) collected from companies under the scrapped tax provision are to be refunded if the firms agree to drop outstanding litigation, including claims for interest and penalties.

Of this, Rs 79 bn (£789 million) is due only to Cairn. The government last month notified rules that when adhered to will lead to India withdrawing tax demands raised using the 2012 retrospective tax law and any tax collected in the enforcement of such demand being paid back.

For this, companies were required to indemnify the Indian government against future claims and withdraw any pending legal proceedings.

Cairn on November 3 had stated that it “entered into undertakings with the Government of India in order to participate in the scheme introduced by the recent legislation, the Taxation Laws (Amendment) Bill 2021, allowing the refund of taxes previously collected from Cairn in India.”

The August legislation cancelled a 2012 policy that gave the tax department power to go back 50 years and slap capital gains levies wherever ownership had changed hands overseas but business assets were in India.

India issued tax claims to Cairn six years ago, and in December 2020 the company won an international arbitration against such demands.

The international arbitration tribunal in December overturned a levy of Rs 102.47 billion (£1.02 bn) in taxes on a 2006 reorganisation of Cairn’s India assets prior to its listing, and asked the Indian government to return the value of shares seized and sold, dividend confiscated and tax refund withheld. This totalled $1.2 bn (£890 bn), plus interest and penalty.

The government initially refused to honour the award, forcing Cairn to identify $70 bn (£51.9 bn) of Indian assets from the US to Singapore to enforce the ruling, including taking flag carrier Air India Ltd to a US court in May. A French court in July paved the way for Cairn to seize real estate belonging to the Indian government in Paris.

All these litigations will now be dropped, the sources added.