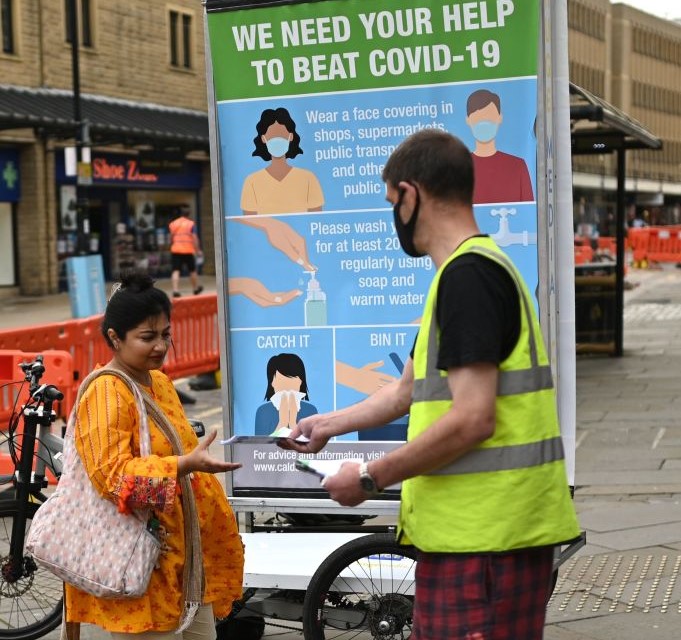 Leaflets are handed out beside a promotion funded by Calderdale Council -- an ad bike display advising people on how to slow the spread of the coronavirus, in Halifax in northern England on August 9, 2020. (Photo: OLI SCARFF/AFP via Getty Images)

AS Britain navigates its way through the coronavirus pandemic, the government insists that science is guiding its decisions. But a self-appointed group of independent experts says it sees little in Britain’s response that is evidence-based, especially after an upturn in new cases forced a delay in lifting more lockdown restrictions.

Unlike in other European countries where debate has raged over how to control Covid-19, the scientific opposition to Britain’s approach is notably organised: the independent group sits almost in parallel to the government’s own scientists, assessing the same outbreak indicators but publicly identifying failings and inconsistencies.

The group has issued detailed reports on almost every major issue tackled in recent weeks: contact tracing, reopening schools, restaurants and pubs, and relaxing social distancing. And at nearly every turn, the independent experts have essentially pointed out glaring mistakes in the government’s approach.

“There is no long-term strategy, as far as we can see,” said University College London virology professor Deenan Pillay, who advised the government during the 2009-10 swine flu pandemic and is a member of the independent group.

“It is the role of scientists and those with expertise to hold the government to account.”

The British government had established a Scientific Advisory Group for Emergencies, also known as SAGE, as the coronavirus exploded in China in January to address the emerging crisis. Its membership was kept secret apart from a few exceptions.

That troubled David King, a former chief government scientific adviser, who then created an “Independent SAGE” in early May.

On the day of the shadow group’s first public meeting, the government finally released a list naming the scientists giving it advice. Cabinet ministers have since dropped giving regular coronavirus briefings and seem to have shifted focus to restarting the economy, while the independent experts hold weekly news conferences analysing the government’s latest virus indicators.

Mark Walport, a SAGE member and former chief government scientific adviser, said the rival group risks confusing the public with their assessments and that scientists should not be making policy decisions. But psychologist Susan Michie said she and other scientists were frustrated by what they perceived as their lack of impact with officials.

“What’s depressing about it is they don’t seem to be learning lessons or showing any evidence they’re listening to (the World Health Organization) or to scientific advice,” Michie, who serves both on a SAGE sub-committee and with Independent SAGE.

Shortly before Britain reopened some schools on June 1, Independent SAGE published a report warning against it because the country did not have the necessary contact tracing system in place. Some schools did reopen, but many will stay closed until September.

Several weeks later, British Prime Minister Boris Johnson announced that social distancing guidelines would be reduced from two metres to one, including indoors.

Independent SAGE, however, said the rates of Covid-19 transmission were still too high for such a change, noting that 97 per cent of “super-spreading” events began in indoor environments.

And at a July 24 press conference, Independent SAGE scientist Christina Pagel said that given the risks of the virus spreading among people exercising indoors, she didn’t think it was safe to reopen gyms. The next day, Britain reopened gyms across the country.

While the group’s criticism of government policy has mostly been couched in dry, scientific language, that was not the case when the U.K. imposed its first local lockdown in late June as infections surged in the central England town of Leicester.

Independent SAGE called that “a foreseeable crisis of the government’s own making” and said that by enforcing new restrictions without consulting local authorities, it risked “creating uncertainty, dissent and even disorder.”

The group has called for the government to radically change its approach to Covid-19, saying the aim should be to wipe out the virus in the UK instead of allowing it to linger in the population at low levels.

The leader of Scotland, First Minister Nicola Sturgeon, recently adopted that strategy and is aiming to convince the other U.K. countries to do the same.

“We fear that the government has given up trying to control the pandemic further,” the independent scientists wrote in a report last month. They said Britain should try to eliminate the disease completely, which would require measures like an aggressive contact tracing system and tighter restrictions on international travelers.

“What we are doing is deeply unpopular in the government because it’s a reminder that the virus hasn’t gone away,” said London School of Hygiene and Tropical Medicine professor Martin McKee, an Independent SAGE member.

Asked whether the government thought Independent SAGE was helpful, the prime minister’s spokesman, James Slack, said, “Scientists are making regular public comments and contributions to the discussion, and the government’s advisers will take any views into account.”

Some experts said that even if the British government hasn’t directly acknowledged the recommendations of the independent group, they are having an effect.

“The government might be more careful if they know they are going to be so closely scrutinised,” said Michael Head, a public health expert at the University of Southampton.

Britain’s decision to halt the easing of its pandemic restrictions suggested the independent experts were right about the dangers of exiting lockdown too quickly, according to Head.

Earlier this month, the government delayed reopening venues like bowling alleys, skating rinks and casinos, citing recent estimates of about 4,900 new cases per day, up from about 2,000 daily cases in June.

Independent SAGE member Pagel, who is also a professor of operational research at University College London, said the group’s objective is ultimately not to criticize, but to offer alternative strategies.

“I think our approach of a more gradual opening would have reduced the need for the new restrictions,” she said, referring to some of the recently adopted controls to stop the surge of Covid-19.