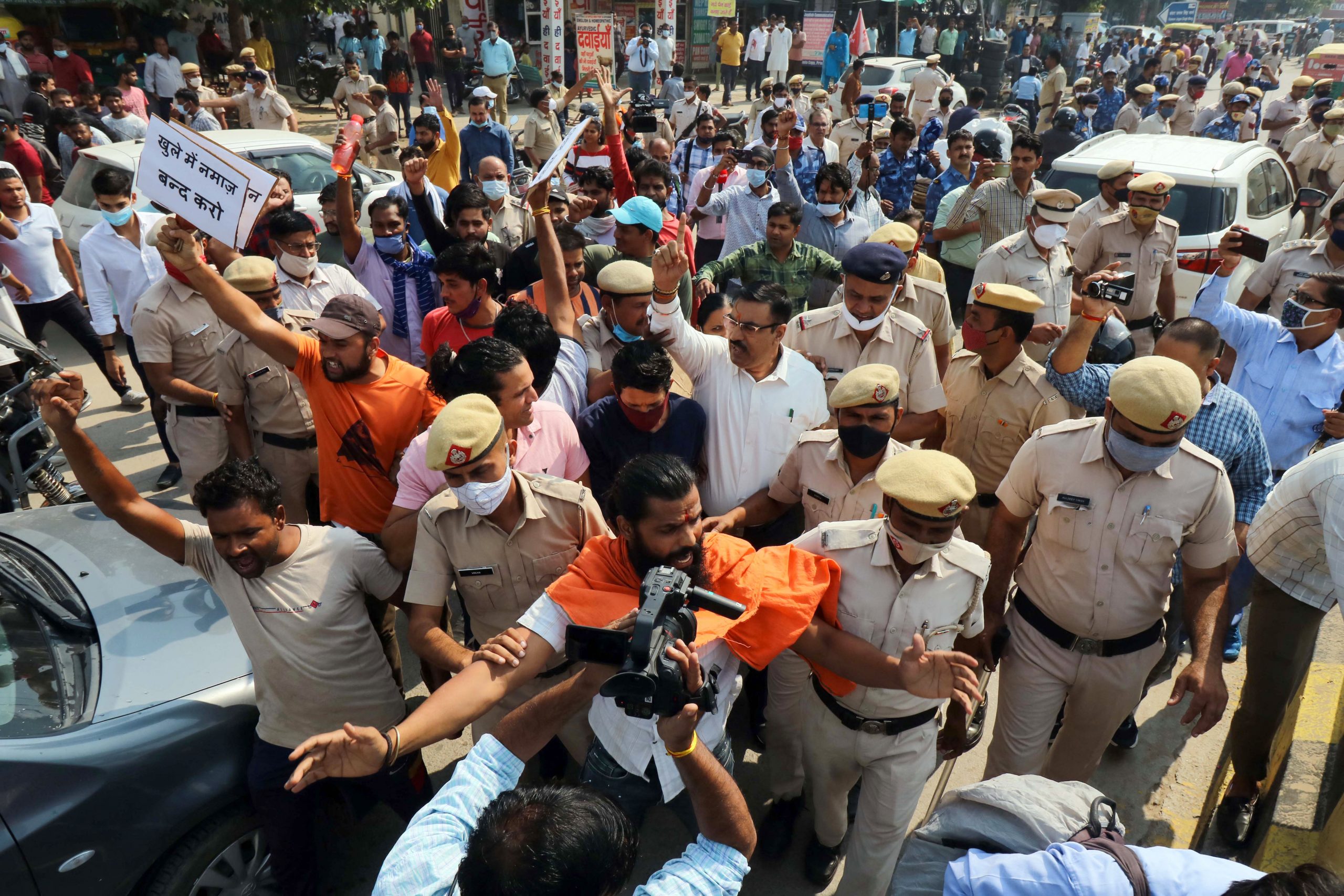 Friday afternoons are a time for communal prayer for Muslims in the northern Indian city of Gurugram, who over the years had negotiated with local authorities to pray in parks and empty plots of land as they outgrew their mosques.

But recent protests by Hindu groups, sometimes preventing prayers as banner-carrying members shouted slogans, have disrupted the arrangement – prompting city officials to withdraw permission for some of the sites used by Muslim worshippers.

“Space is limited, so there is always a question of how it can be made available for different activities, and different groups,” said Prerna Mehta, an associate director of urban development at World Resources Institute India, a think-tank.

“But there is a certain hierarchy in how public spaces are distributed and accessed in the city: often, poorer sections and minority communities have fewer spaces and more limited access,” she told the Thomson Reuters Foundation.

Muslims account for about 14 per cent of India’s population of 1.3 billion, with Hindus making up about 80 per cent.

In Gurugram, near the Indian capital Delhi, designated public areas for namaz, the Persian word for prayer, have halved to about 20 as Hindu groups claimed the spaces for games and other activities, saying religion should not be practised there.

“The Friday prayer takes hardly 30 minutes, and it is the only time – apart from festivals – when we need a large space because there aren’t enough mosques to hold us,” said Shehzad Khan, chairman of Muslim Ekta Manch, a charity group.

“Public spaces are for everyone, and we have been praying like this for more than a decade without inconveniencing anyone. If religious activities are not allowed, then authorities should not allow any Hindu festivities, either,” he said.

A senior official in Gurugram said authorities were not being partial to Hindu groups.

“Muslim prayers are still being offered in many places – there have been protests in only two or three places,” said Yash Garg, deputy commissioner of Gurugram district.

“The community and the administration are committed to finding a peaceful resolution, and we are looking at all possible options,” he said, without giving further details.

Across Asia, public spaces have become battlegrounds pitting informal settlers, street vendors and other marginalised communities against elite residents and authorities who say they are removing vendors and settlements to beautify the city.

Across the country, human rights activists have reported a rise in mob lynchings and hate crimes against Muslims and low-caste Dalits during Modi’s tenure – a charge the government has denied.

Such incidents reflect “a clear disregard to any restraint on religious manifestations in public spaces when it comes to Hindus”, said Neha Dabhade, a deputy director at the Centre for Study of Society and Secularism.

“Everyone should have equal access to public spaces in a way that does not cause inconvenience, but increasingly there is a competitive contestation that is communal in nature, and a feeling that Muslims should not be in public spaces,” she said.

In reducing the number of designated spaces for namaz, Muslims’ citizenship rights and their freedom to worship are being curbed, she said.

“It is part of a larger eco-system of marginalising minorities in the country,” she added.

These actions come even as federal and city officials have pledged to increase the amount of public space and make communal areas more accessible to improve residents’ health and quality of life.

Prolonged lockdowns during the coronavirus pandemic have highlighted the importance of outdoor public space in cities around the world.

In Gurugram, some Hindu residents have offered their homes and shops for namaz, and several Sikh groups have said Muslims can also pray in the gurduwara, the Sikh place of worship.

“This gives us hope,” said Khan, adding that they still hoped to resolve the matter amicably.

“The act of praying in the open should not be one that causes anxiety and concern. These spaces are for everyone – whether for prayer or a game of cricket, and should remain that way.”