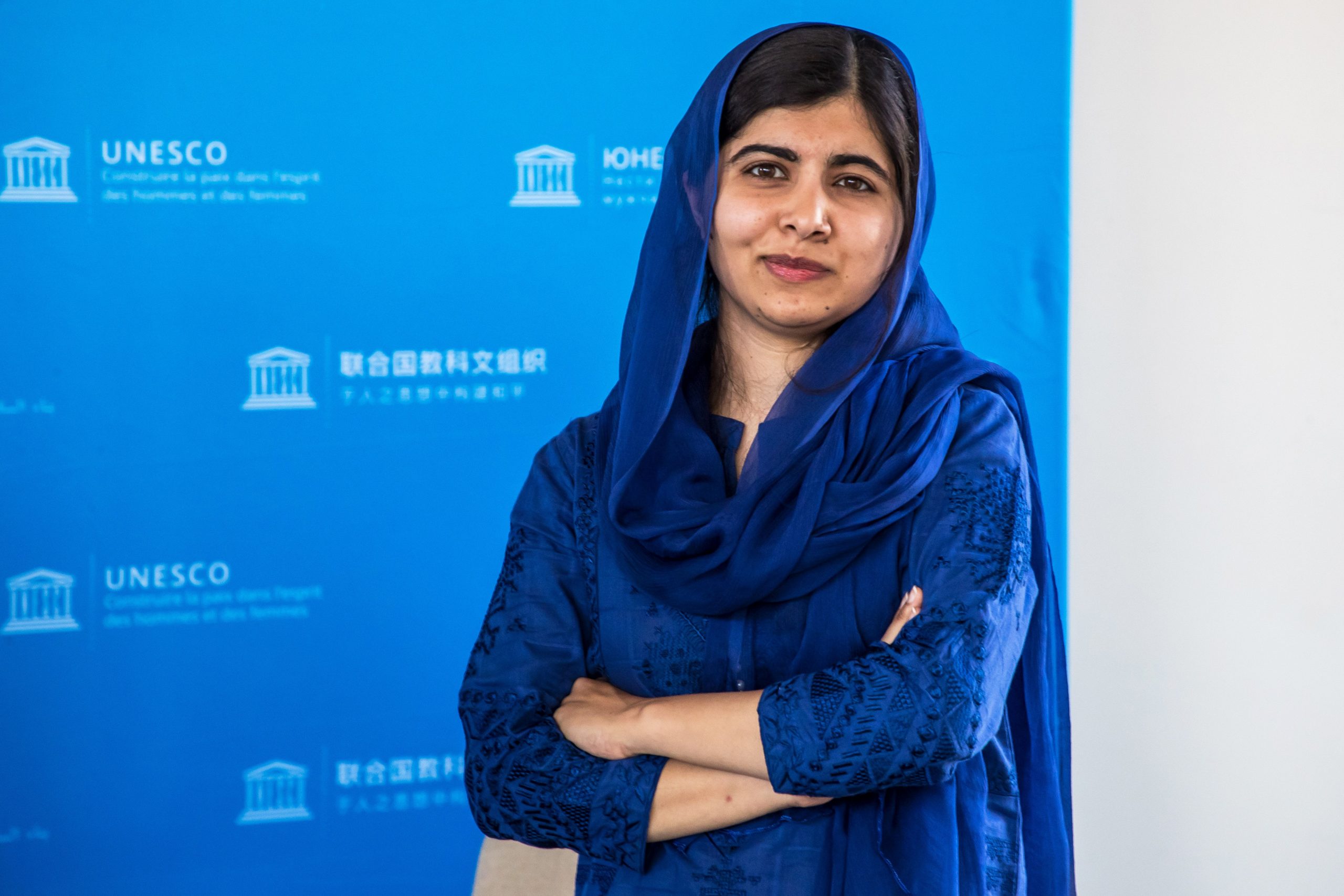 MALALA YOUSAFZAI is now a young woman of 23 and has talked, probably for the first time, about finding love.

The activist for girls’ edu­cation is now so famous that she is known by her first name. She has just spent three days in London being glammed up for a cover shoot for British Vogue, barely rec­ognisable as the 15-year-old girl who was airlifted to the Queen Elizabeth Hospital in Birmingham after being shot in the head by the Taliban on October 9, 2012.

“Resplendent on British Vogue’s July cover, Malala Yousafzai is a vision in a red Stella McCartney headscarf and matching red lips,” says the magazine, which is hop­ing for a sell-out issue, as was the case when Meghan Markle, Duchess of Sussex, was its guest editor in Sep­tember 2019.

Val Garland, the make-up artist, has confided: “Half­way through the shoot, I just asked if we should give her a red lip – and she was like, ‘Yeah! Let’s do it!’.”

Edward Enninful, the fashion bible’s first black editor, has explained his de­cision to go from Meghan to Malala: “When it comes to people I ad­mire, Malala Yousafzai is right at the top. At 23, the world’s most famous university graduate has already lived so many lives. Activist, author, tireless campaigner for girls’ education, daughter, sister, student and survivor.”

Malala admits she has things to work out: “Where do I live next? Should I con­tinue to live in the UK, or should I move to Pakistan, or another country? The sec­ond question is, who should I be living with? Should I live on my own? Should I live with my parents? I’m currently with my parents, and my parents love me, and Asian parents especially, they want their kids to be with them forever.”

With a Nobel prize and 2:1 in philoso­phy, politics and economics from Oxford behind her, but what does she do next? And perhaps most important of all, what about love? “I would say I have come across people who have been great, and I hope I do find someone who understands me, respects me, and loves me and takes care of me,” she says, when asked wheth­er she had met anyone suitable at Oxford.

Later, when she and the interviewer Sirin Kale, walk through St James’s Park, Malala herself returns to the subject. She explains that she feels as though all her friends are finding partners, and she’s not sure if that’s what she wants.

“I’m slightly nervous,” she says. “Espe­cially [in terms of] thinking about rela­tionships. You know, on social media, everyone’s sharing their relationship sto­ries, and you get worried…” About ro­mantic relationships? “Yeah…” she says, thinking carefully. “If you can trust some­one or not, [and] how can you be sure.”

Malala’s parents had an “arranged love marriage” – they liked the look of each other, and their parents worked out the rest. She isn’t sure if she’ll ever marry herself. “I still don’t understand why peo­ple have to get married. If you want to have a person in your life, why do you have to sign marriage papers, why can’t it just be a partnership?” Her mother – like most mothers – disagrees. “My mum is like,” Malala laughs, “‘Don’t you dare say anything like that! You have to get mar­ried, marriage is beautiful.’” Meanwhile, Malala’s father occasionally receives emails from prospective suitors in Paki­stan. “The boy says that he has many acres of land and many houses and would love to marry me,” she says, amused.

“Even until my second year of univer­sity,” she continues, “I just thought, ‘I’m never going to get married, never going to have kids – just going to do my work. I’m going to be happy and live with my family forever.’ I didn’t realise that you’re not the same person all the time. You change as well and you’re growing.”

Initially, she is going to work in televi­sion, one of her great passions. She had meetings with the major streaming plat­forms: of course, they were interested – but one stood out. In March, she announced a multi-year partnership with Apple TV+ – also home to Oprah Winfrey and Steven Spielberg – and the launch of a brand-new production company, Extracurricular.

“I want these shows to be entertaining and the sort of thing I would watch,” she says of overseeing the early stages of de­velopment. “If I don’t laugh at them or enjoy them, I won’t put them on-screen,” she continues. So alongside documenta­ries on serious issues, such as girls’ edu­cation and women’s rights, she wants to make comedies – Malala is a huge Ted Lasso fan, partly because the titular star of the Apple TV+ hit has a moustache a bit like her dad’s. She may be a global icon, but she’s also just a young woman who loves a Jamaican takeaway and an episode of Rick and Morty.

Specifics are still hush-hush, but her output may be seen next year. Anima­tions, dramas, children’s shows, it’s all in the works – and she also hopes to give a platform to talent from around the world.

“I don’t think there’s anyone quite like her,” muses Apple CEO Tim Cook over a video call from his office in California. “She’s an original.”

He first met Malala in Oxford in 2017 and was instantly impressed. “She has a lifetime of experience in 23 years,” says Cook. “She has the story of her life, all of her accom­plishments, and she’s focused on making a difference in the world. She has a North Star, which always impresses me about people. And despite all of this success, she’s humble and really down to earth and just a joy to spend time with. She’s amazing.”

Malala also met the Obamas in the White House. “Malala has generated so much glowing praise over the last few years,” Michelle Obama responds via email, “but here’s the thing: it’s all true. She’s truly extraordinary. Barack and I first met Malala when she visited the White House in 2013, and right away, it was clear she belonged in a room with the president of the United States. Her poise, her wisdom and her earnest belief in the power of every girl – it all couldn’t have been clearer from that very first meeting.”

Generally speaking, Malala avoids talk­ing politics, Vogue notes. Malala Fund operates in eight countries and wading into politics could imperil its vital grass­roots work. But in February, she made an exception, after a Taliban member con­nected to her shooting, Ehsanullah Ehsan, escaped from prison and threat­ened her on Twitter. “How did he es­cape?” Malala tweeted, tagging prime minister Imran Khan. “He has claimed responsibility for killing so many people,” says Malala, frustration in her voice, “and he was the spokesperson of a terrorist organisation, and people are just going to let it go, and allow it?

According to Vogue, Malala is already something of an elder stateswoman for the new cohort of Generation Z activists, and is friends with 18-year-old climate change activist Greta Thunberg, who vis­ited her at Oxford, and 21-year-old gun control campaigner Emma González.

Both text her for advice. “I know the power that a young girl carries in her heart when she has a vision and a mis­sion,” says Malala.