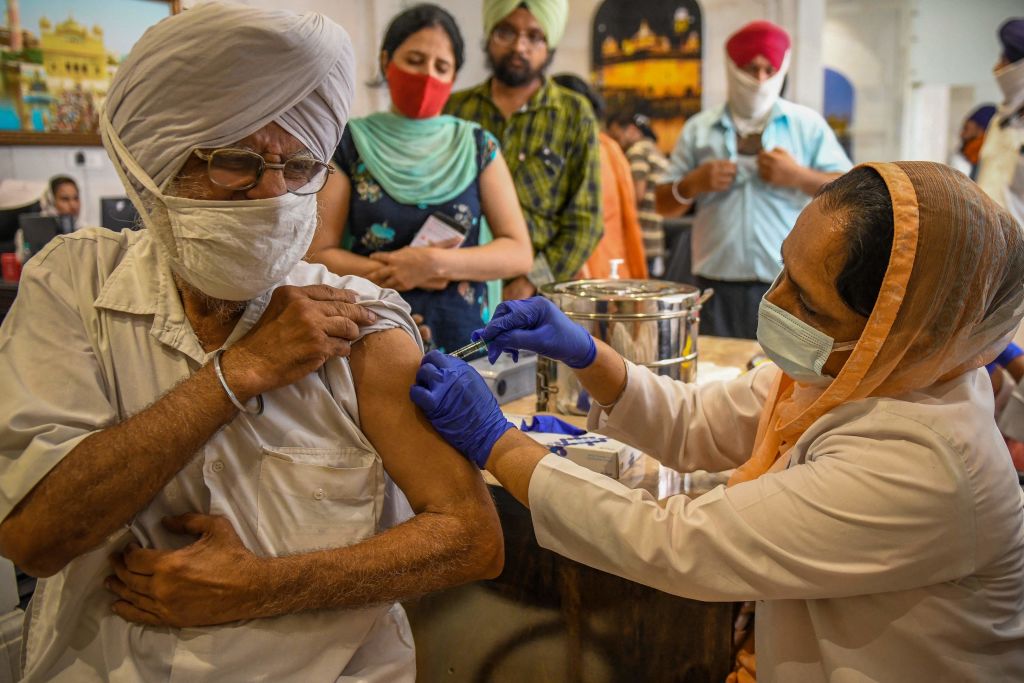 A health worker inoculates a man with a dose of the Covaxin vaccine against the Covid-19 coronavirus inside the premises of the Golden Temple in Amritsar in the Indian state of Punjab on June 29, 2021. (Photo by NARINDER NANU/AFP via Getty Images)
Follow Us

INDIA has administered more Covid-19 vaccine doses in the last two weeks than the number of people who signed up for shots during the period, government data showed on Tuesday (29), signalling improving supplies after widespread shortages.

Indians struggled to book scarce inoculation slots after Prime Minister Narendra Modi opened up vaccinations to all of the country’s 930-940 million adults last month without a corresponding rise in output. Many immunisation centres ran out of vaccine shots and closed temporarily.

But rising production at the Serum Institute of India, the world’s biggest vaccine maker, has boosted the availability of Covid-19 shots in the country this month. The company is on course to raise the monthly output of the AstraZeneca vaccine to 100 million doses or more from July, from about 90m this month and about 65m in May.

That has helped India administer 61m doses in the last two weeks starting June 12, compared with 58 million registrations for vaccination on the government’s Co-Win vaccination website. It was the first time vaccinations exceeded registrations since the immunisation drive was expanded from May 1.

India has administered 323.9m doses, the most in the world after China and the US. Vaccination relative to people, however, is much lower in India than in many countries.

So far, more than 346 million people have registered for shots in India, which wants to cover all its adults this year. Currently, cities are vaccinating much faster than the countryside.

India stepped up inoculations from last week when Modi’s federal government took back the responsibility of supplying doses to individual states free of cost. A previous policy of letting states buy a portion of their requirements from companies had slowed down the immunisation process.

The daily fatalities remained below 1,000 for the second consecutive day, the ministry said.

According to reports, 329m cumulative vaccine doses have been administered so far under the nationwide vaccination drive.

The number of active cases has further declined to 552,659, comprising 1.82 per cent of the total infections, while the national COVID-19 recovery rate has improved to 96.87 per cent, the data showed.

A net decline of 20,335 cases has been recorded in the active cases in a span of 24 hours.

The weekly positivity rate has declined to 2.74  per cent. Recoveries continue to outnumber daily new cases for the 47th consecutive day.

The number of people who have recuperated from the disease surged to 29,366,601, while the case fatality rate stands at 1.31 per cent, the data stated.