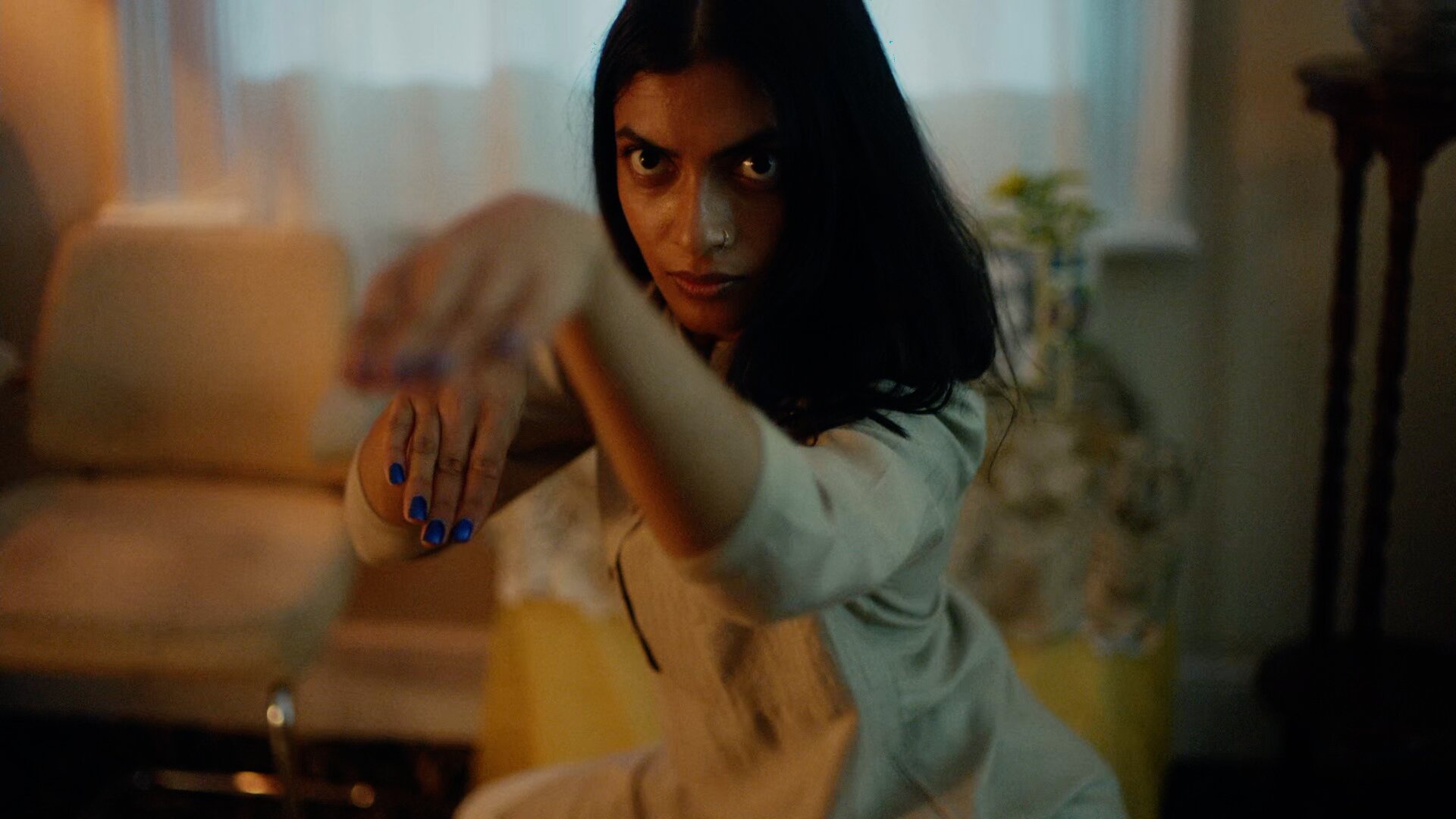 IN THE FRAME: A scene from Hetain Patel’s Trinity
Follow Us

A TRILOGY of films depicting ethnic minority protagonists in Hollywood blockbuster movies that “they are typically excluded from” is part of a new exhibition in Southampton.

Hetain Patel’s new art show Trinity is based on his fascination with the cultural influence that Hollywood has on people’s lives.

Having premiered at the John Hansard Gallery earlier this month, the installation features all three films – The Jump (2015), Don’t Look at the Finger (2017) and Trinity (2021). The films, which take inspiration from superhero and martial art movies, has characters from ethnic minority backgrounds.

“The socio-cultural impact of popular culture is huge,” Patel told Eastern Eye. “We emulate the things around us, that the world tells us is important (…) and you grow up feeling as though that place is not for you.”

In recent years, Patel noticed his nieces and nephews dressing up as superheroes. He said children often unknowingly fantasised about being a man or being white, in order to be seen as “heroic”.

The lack of ethnic minority representation in the media also has an impact, the British Gujarati cautioned. He was drawn to superheroes as a child, Patel told Eastern Eye. He portrayed Spiderman for The Jump, which shows him dressed as the superhero in his grandmother’s living room.

“I grew up in a racist environment and in superhero films, you’re fantasising about having agency and power, and strength – all of those things that you don’t feel like you have in real life,” said Patel. “That place of escapism was an important space and I think it still forms an important space for people today.”

As well as the three films, the Trinity exhibition features a collection of posters, action figures and other merchandise associated with the trilogy. On the ‘gift shop’ experience, Patel said it was a chance for visitors to see “where the marginalised worlds of the films unapologetically occupy the mainstream cultural space they are typically excluded from, intentionally taking physical, economic and political space via film posters, action figures and other merchandise.”

Patel believes it is not only the films that have influence, but the merchandise too. He admitted he was conscious of children’s reaction to the toys, with young people often imagining they were the action figure or character.

“It’s another way of projecting your body and identity into something,” he said. “You project yourself into these action figures.”

Although the merchandise is limited and available only at the exhibition, Patel, who hand-created them, said he would love to have them mass-manufactured so children could play with them at home.

“The ideal situation is all children being able to fantasise about being the characters in my films, who are people of colour, and associate that with power, with importance, with gravity,” the performer said.

As a child, the Bolton-born artist was drawn to entertainers of colour. He loved comedian Eddie Murphy and his roles in films such as Coming to America and Beverly Hills Cop. “There were no Asians on screen at that sort of scale, so a lot of us in the community adopted Eddie Murphy as one of us,” Patel recalled. “We’d never seen that before – a contemporary big Hollywood film with big budgets led by a black person.”

Asked how it felt to see the three films together in the same space, Patel described it as “a dream come true”. “The feeling of having that trilogy is a real moment,” the London-based artist said. “Each one of them took up so much resource, time, energy and work from different collaborators so it feels like a lot of work under one roof, and a place where the ideas that have been consumed over the past five or six years can live together in one space.”

Now his trilogy is complete, Patel wants to go bigger. He is now working toward making his own full-length feature film. The project is at a very early stage, but Patel said he is feeling positive about its future.

“Films cost a lot of money, there’s always a lot of competition… there’s a million reasons why films don’t get made,” he said. “But I feel good about this. I feel it’s got something to say and I’m working towards something that doesn’t exist out there. I feel good about its pursuit and seeing where it will go.”

Hetain Patel: Trinity is at the John Hansard Gallery, part of the University of Southampton, until October 30. It will then be shown at the New Art Exchange, Nottingham, from January 29 until April 24, 2022.