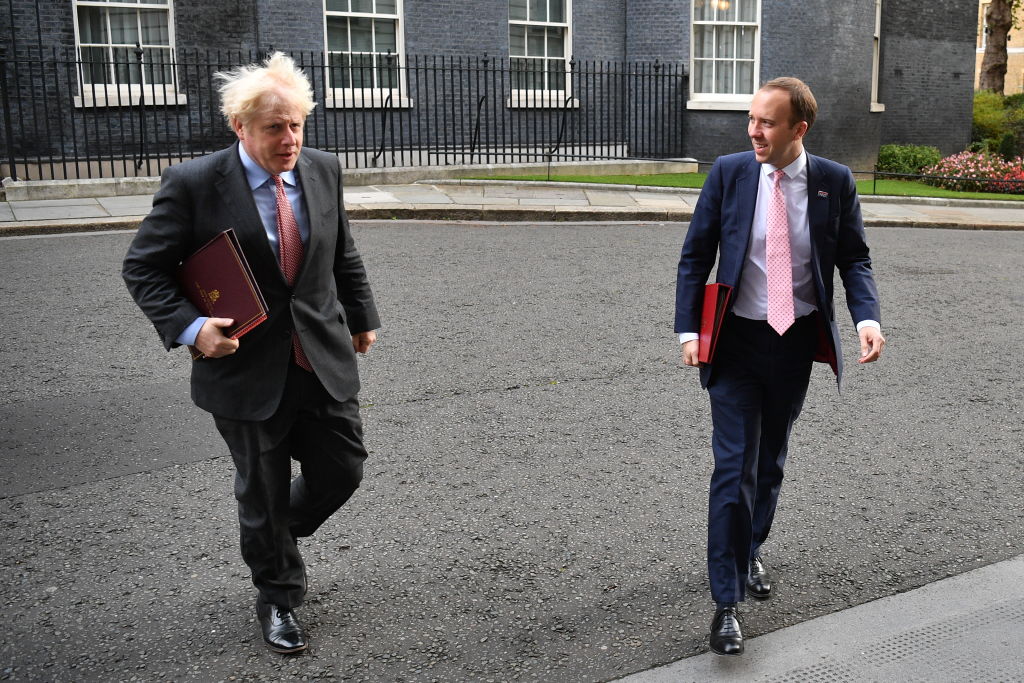 FILE PHOTO: Prime Minister, Boris Johnson and Secretary of State for Health and Social Care, Matt Hancock walk from Downing Street for the weekly cabinet meeting to be held in the Foreign and Commonwealth Office on September 30, 2020 in London, England. (Photo by Leon Neal/Getty Images)

UK health secretary Matt Hancock failed to tell prime minister Boris Johnson about a Public Health England (PHE) study showing the effectiveness of vaccines against the delta variant during a key meeting to decide whether to extend Covid restrictions, according to a report in The Telegraph.

Hancock had known about the PHE data three days before the “quad” of four senior ministers, led by Johnson, met on June 13, to decide whether to postpone the planned June 21 reopening until July 19, the report said.

However, multiple sources familiar with the meeting said that the data was also not included in briefing papers given to Johnson, chancellor Rishi Sunak and Cabinet Office minister Michael Gove in advance of the meeting, it added.

The Telegraph report has raised the possibility that the quad could have opted to press ahead with lifting the restrictions on Monday (21) if they had been aware of the study.

The PHE data showed that both the AstraZeneca and Pfizer vaccines were more effective at preventing hospitalisation with the delta variant than they were against previous strains.

According to various reports last week, Johnson had called Hancock “hopeless” over his handling of the pandemic last year.

On Saturday night, senior Tories asked whether the health secretary had “bounced” Johnson into extending the current measures.

The disclosure will fuel calls for the measures to be lifted on July 5 – the halfway point before July 19 at which Johnson said the government could decide to lift them early.

One Cabinet minister insisted there must now be a “political decision” to allow businesses to operate fully again due to concerns about severe harm being done to the economy with relatively “little benefit”.

“Either Matt Hancock thought this data was insignificant or he thought it should be withheld from the Prime Minister and other key ministers,” Steve Baker, the deputy chairman of the Covid Recovery Group of Conservative MPs, told The Telegraph.

“Either way, the mind boggles at what conversation must now be necessary with the Prime Minister, and I feel confident it will be a matter of interest to my colleagues on the relevant select committees. If Matt Hancock was deliberately withholding relevant information, what was he trying to gain? Was the Prime Minister bounced?”

A department of health spokesman denied that Hancock “bounced” the prime minister.

Sources close to members of the “quad” also said they were not provided with the usual explanations that accompany modelling by Sage scientists presented at the meeting, which showed that a June 21 reopening would lead to a large resurgence in hospital admissions, The Telegraph report added.

According to the newspaper report, Hancock was briefed on the overall findings of the data on June 10, before PHE went on to send its written analysis to the health secretary on June 12.

Johnson hosted a brief virtual meeting of the quad from the G7 summit on Cornwall on June 12, ahead of the longer meeting following his return to Downing Street the next day.

However, the first notification that Number 10 received of the results was in an email to aides at around 3pm on June 13, shortly before the meeting that evening at which ministers decided to extend the restrictions.

Sources with the talks said an email sent so close to the meeting did not amount to a meaningful attempt to inform Mr Johnson of the data.

Baker added: “To send an email so late in the day is an act of opposition. It’s the sort of thing we do to Labour MPs before appearing in their constituencies to campaign. It’s not what a Health Secretary should do to a prime minister.”

A government source insisted that “equivalent data” to the PHE study was shown to the quad. The “equivalent” data was said to have been drawn up by Sage’s Scientific Pandemic Influenza Group on Modelling (Spi-M) and to have included similar figures to the PHE’s findings on the efficacy of the vaccines.

The PHE data, which was only made public on June 14 evening after Johnson announced the delay, was based on an analysis of 14,019 cases of the delta variant as recent as June 4, looking at emergency hospital admissions in England.

It was described by PHE as “hugely important findings” which “confirm that the vaccines offer significant protection against hospitalisation from the delta variant”.

A separate analysis by The Telegraph shows that hospital admissions in regions with the highest outbreaks of the delta variant are rising at a third of the pace of last September, while a third of hospitals in England have no Covid patients at all.

Hancock also told MPs this week that people who catch the virus are now spending 20 per cent less time in hospital beds, with the average stay being cut from 10 to eight days.

“The reason we need more time is because of the increased transmissibility of the delta variant, not because of vaccine escape,” a government source told the newspaper.