The Bolton boy self-published a book called Covid Christmas Parade about a young boy spreading festive cheer during the pandemic. 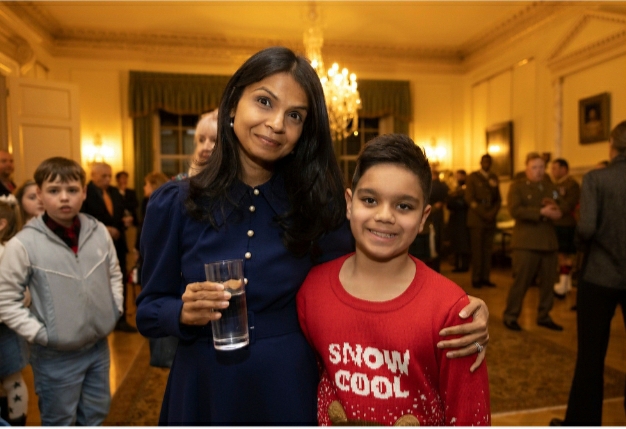 Points of Light winner Kumar has received a personal invitation from Sunak. The prime minister also welcomed Ukrainians who had found shelter in Britain, serving personnel from Catterick Garrison in Yorkshire and Points of Light award winners for the event.

During the event, Kumar met Sunak and his wife Ashkata Murty. The prime minister welcomed the child champion with a friendly smile and ‘hi’ and. His wife led him up the stairs to the reception rooms and interacted with him, a statement said.

He spoke to Ashkata on two separate occasions. Later he managed see Sunak again at the end to say ‘bye and thank you.’

“I had the honour and privilege of meeting the Prime Minister and his wife at 10 Downing Street. They are such lovely, friendly, down to earth people. Thank you for welcoming me into your home,” Kumar said after the meeting.

During the event, Christmas carols were sung, music played, before the switching on of Christmas lights. This year’s tree at Downing Street came from Staffordshire.

Kumar has written and self-published his own book, ‘COVID Christmas Parade’, about a young boy spreading festive cheer during the pandemic, which is raising money for the National Literacy Trust to support other children whose literacy and learning were affected by the pandemic.

He was inspired to write his book after completing a lockdown challenge in the spring of 2020 to read 50 books over three months, which received praise from the patron of the National Literacy Trust, the Duchess of Cornwall.

He has also supported the charity by joining their summer fundraising challenge, #FitforLit, by cycling 50 laps a day (one for each book he read) over ten days around the University of Bolton stadium. Kumar also became a Premier League Reading Stars Ambassador for Bolton Wanderers Football Club, as part of the programme the charity ran in partnership with the Premier League to inspire children to get into reading through their love of sport.

Proceeds from his book are going towards the National Literacy Trust.