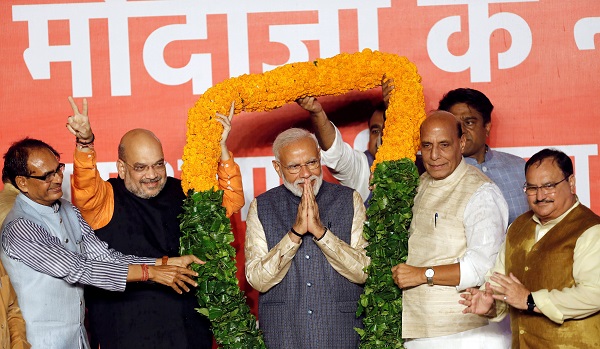 WITH prime minister Narendra Modi and his party re-elected in a landslide, here is a look at the challenges facing his government over the coming five years.

Jobs
Modi in his first term fell short on creating jobs for the more than a million Indians entering the labour market every month, experts say.

A leaked recent government report showed that unemployment rose to a 45-year high of 6.1 per cent in 2017-18.

Government jobs have seen staggering numbers of applicants, including many overqualified candidates drawn to the prospect of a secure position with perks. Last year 19 million applied for 63,000 positions at Indian Railways.

Non-farm sectors are hampered by stringent labour laws and insufficient investment in skills, according to the Organisation for Economic Co-operation and Development.

Farmers
Many of those looking for work are those escaping from a dire crisis gripping Indian agriculture that has driven thousands of farmers to suicide in recent years.

Agriculture, with its allied sectors, is the largest source of livelihoods in India, with 70 per cent of rural households depending primarily on it.

Farmers are finding it ever harder to water their crops as groundwater levels fall and monsoon rains become more unpredictable.

This has prompted extreme measures including curfews and armed guards near water sources while groundwater supplies in many areas have been contaminated by pollutants.

Farmers are also reeling from low prices for their produce and a lack of infrastructure meaning 40 per cent of fruit and vegetables rot before reaching consumers, according to the UN.

Pollution
Modi had pledged billions of dollars to clean up the holy Ganges river, which like other waterways is awash with raw sewage and industrial effluent. But results have been mixed.

India’s air is also a health hazard the country is home to 22 of the world’s 30 most polluted cities, according to Greenpeace. Industrial emissions, car fumes and smoke from burning crops are creating a toxic cocktail.

Poisonous air was responsible for 1.24 million premature deaths in India in 2017, according to a study published last year by Lancet Planetary Health, which said tens of millions of people face serious health risks.

Every winter Delhi, the world’s most noxious capital, chokes through haze so extreme that levels of airborne pollutants routinely eclipse safe limits by more than 30 times.

But the environment barely got a mention in the election campaign.

“Whilst the public across the world is generating awareness on environmental issues, it is clearly missing in India,” Aarti Khosla, director of Climate Trends, a New Delhi-based initiative said.

Foreign Policy
Modi also faces foreign policy challenges, not least with Pakistan, against which India has fought three wars since partition in 1947.

Pakistani prime minister Imran Khan tweeted on Thursday (23) that he looked forward “to working with him (Modi) for peace, progress and prosperity in South Asia”.

In 2017 India and China had a military standoff over a Himalayan plateau claimed by Beijing and Bhutan, a close ally of India. Since then China and India have sought to patch up relations.

India also walks a tightrope between the United States and Russia, with Moscow still a major arms supplier to New Delhi including the S-400 missile system.