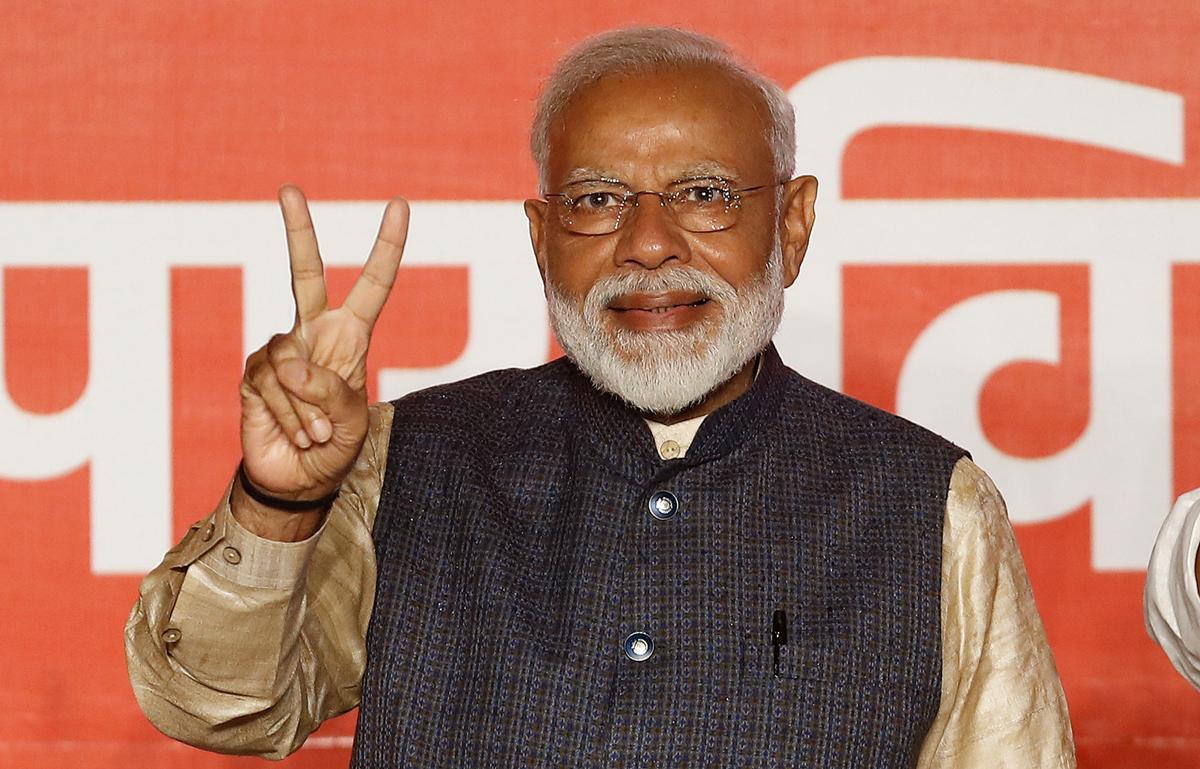 Narendra Damodardas Modi on Thursday emerged an electoral superman who stamped BJP’s massive win with his very own imprint, quite like a picture taken in portrait mode – where all else, including the party and its many leaders, recedes into fuzzy background.

Towering over India’s political-scape, the RSS ‘pracharak’ who would be electoral king powered the BJP-led NDA to victory at the hustings with his party alone poised to win 300 of 542 seats.

It will be the first non-Congress party to come back for a second successive term, that too with such a resounding majority.

As he sealed his legacy as one of post-independent India’s most powerful leaders – described by the opposition as the most contentious and divisive – Modi is the man mainly Hindu India has embraced.

The poster boy of Hindutva from Vadnagar, a small town in north Gujarat’s Mehsana district, Modi was unstoppable as he transported the BJP to colossal success on a wave of muscular nationalism, majoritarian pride and charisma.

The 68-year-old, who takes pride in telling people about his humble beginnings as a ‘chaiwallah’, has  cemented a position in political history which could be greater than what he anticipated.

Criticised for not meeting development targets and also admired for political strategy, there was no changing the narrative he scripted as he went about winning the election in the face of discontent against his government.

He stands head above shoulders over other leaders, in and outside is party, with his powerful oratory that enthralled his audience, whether he speaks to them in rallies or at marquee events in India and abroad. But he never opened himself to questions by the media.

That mattered little to his supporters, who see him essentially as a “strong leader” who will not play the politics of appeasement. It was under his watch that the 2002 Gujarat riots broke out, killing over  1,000 people, mostly Muslims.

Overcoming that controversial past, Modi gained wide acceptance abroad and even adoration in India, as he built a well crafted strategy for a nationalistic approach, which coupled with BJP’s effective slogans like “Phir Ek Bar Modi Sarkar”, worked wonders for the party.

His campaign blitzkrieg swept away a fragmented opposition’s efforts to corner him. Modi’s last campaign speech in Khargone, Madhya Pradesh, promised “Ab Ki Baar 300 par” and he has delivered in shovelfuls, his exultant supporters pointed out.

As he readies to take the prime minister’s chair for a second time, it marks the culmination of a fascinating journey from an ordinary RSS pracharak to Gujarat’s longest serving chief minister and then the prime minister.

It was a journey that began in the by-lanes of Vadnagar on September 17, 1950. Modi was the third of six children born to Damodardas Modi and Hiraba Modi. The political journey began 35 years later in 1985 when Modi, an RSS ‘pracharak’, was loaned to the BJP.

He was a backroom party office-bearer and key strategist till he was made chief minister of Gujarat to replace Keshubhai Patel in October 2001.

And the rest, as they say, is history.

He successfully blunted criticism with the punchline – ‘Sabka Saath, Sabka Vikas’ (together with all, development for all) during his five-year long stint as prime minister.

The four-time Gujarat chief minister came down hard on his political opponents aggressively demolishing the opposition’s plank to label him corrupt and reaching out to voters through multiple platforms.

As prime minister, Modi ushered in a series of economic reforms, including rolling out of pan-India Goods and Services Tax and Insolvency and Bankruptcy law to effectively deal with insolvency and bankruptcy. He also has been hailed for the Swachh Bharat campaign, building toilets, bringing electricity and cooking gas to remote and poor homes across the country. Under his administration, India also saw the rapid expansion of the road network and modernisation of rail network.

However, demonetisation, a major initiative of Modi, hit the economy hard, triggering joblessness and a dip in manufacturing. As prime minister, he also could not fulfil lofty promises like bringing back black money from foreign shores and doubling farm income.

At the same time, India’s position on World Bank’s ease of doing business index rose to 77 from 100 as result of economic reforms.

On the diplomatic front, Modi pursued an aggressive policy positioning India as a major global player and making efforts to bolster the country’s ties with countries like the US, Russia, China, Japan and the UK.

But perhaps his greatest achievement has been in showing Pakistan its place, which filled his supporters with pride following the air strikes on a terror camp in Balakot.

In the 2014 Lok Sabha polls, he steamrolled all opposition within and outside to secure for BJP a majority that no party could get after Rajiv Gandhi’s ‘400 plus’ victory in 1984. On the victory path, Modi virtually blanked out all others in the party and became its sole face in a long campaign.

In his last 12 years as chief minister in Gujarat, Modi consciously crafted an image of a man with an alternative vision of governance for a country caught in a policy paralysis in the last few years.

With his development model as his campaign plank, he made an instant connect with young voters, middle class and those in rural areas yearning for a change.

Now that they have given the verdict, a giddy India waits for Modi to retake the oath of office soon.