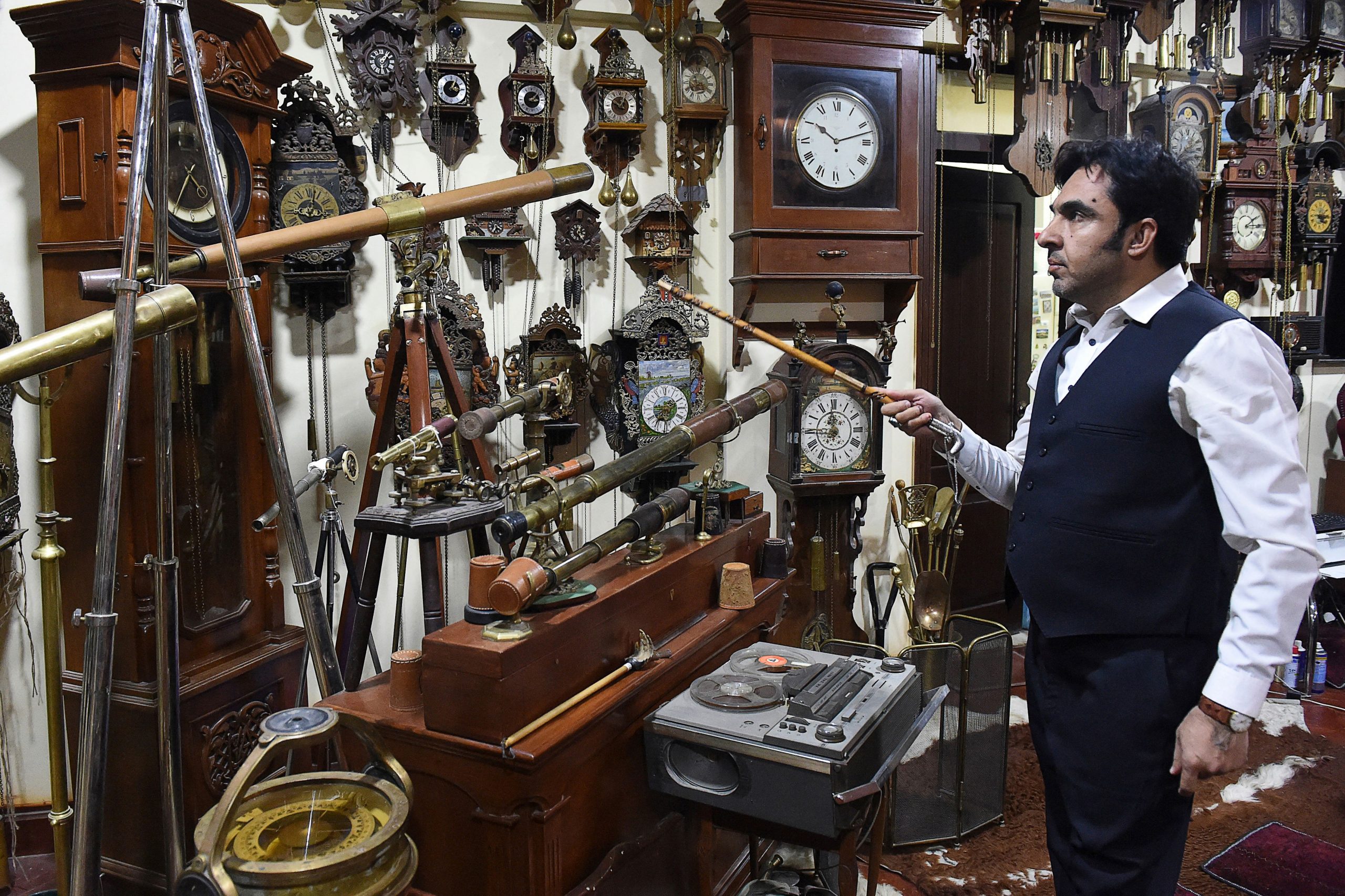 Gul Kakar shows his antique clocks at a museum housed inside the city’s tribal police headquarters compound in Quetta. (Photo by BANARAS KHAN/AFP via Getty Images)
Follow Us

The tick-tock of hundreds of antique clocks fills a small hall in the southwestern Pakistani city of Quetta, where collector Gul Kakar swears he will spend all the time he has left caring for them.

Delicate wristwatches, weighty pocket pieces and battered table models clutter every surface, while the pendulums of wall-mounted and standalone grandfather clocks sway as their deep bongs mark each new hour.

“I know their language,” Kakar, a 44-year-old police officer, tells AFP during a visit to his collection.

“They tell me their problems, and I understand.”

Kakar’s collection, some of which dates back to 1850, is housed inside the city’s police headquarters compound.

That means they are behind heavy gates and high concrete blast walls in a province that for years has been rife with ethnic, sectarian and separatist violence.

The tight security may contribute to the lack of traffic, though Kakar admits he has found few other aficionados to admire his museum and there are hardly any visitors.

“People in Quetta don’t show much interest,” he confesses.

Kakar’s obsession began decades ago, when two family clocks fell out of order and were sent for repairs.

“I started taking an interest… then I got the idea that I should get more clocks.”

Soon he began collecting in earnest and his museum today is the result of more than 18 years of scouring the internet for antiques — even persuading friends overseas to buy secondhand pieces and ship them to him.

He has also lost count of how many he has — or how much he spends on his collection — but income from a family-run landholding means a “major portion” of his police salary goes to clocks.

“For as long as I am alive, I will take care of them,” says Kakar, dressed in a smart black vest and carrying a brass-topped walking stick.

He admits, however, that nobody in his family shares the passion, and that after his death, the collection may simply be sold.

He is ready to donate everything if an official or the private sector steps in to fund a museum in his name.

“I have not so far received any such offer,” Kakar admits.

Despite all the pieces, he still yearns for one last item — a grandfather clock similar to a famed 19th-century timepiece kept in Jacobabad, in Sindh province.

That clock — said by some to be the oldest in what is present-day Pakistan — was handmade in 1847 by John Jacob, the East India Company colonial administrator who gave the town its name.

Kakar lights up as he explains the mechanism of the clock, whose pendulum is sunk 32 feet deep in a well.

He has never seen it, but is keen to one day.

“I would give up my entire collection for that one.”