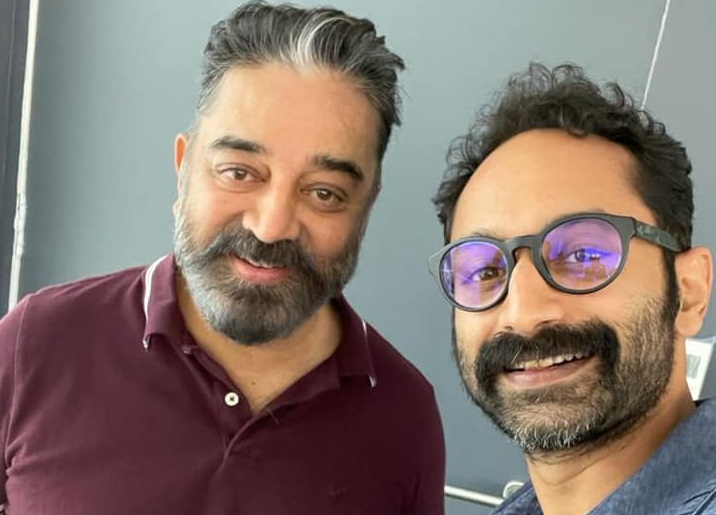 Filmmaker Lokesh Kanagaraj’s next directorial Vikram has been creating a lot of buzz ever since the makers unveiled the first-look poster of the film, featuring Kamal Haasan, Vijay Sethupathi, and Fahadh Faasil. All three actors look menacing in their salt and pepper look. The first look of the film did not only garner rousing response from fans, but it also left several members of the industry in awe.

Vikram went on floors a couple of days ago in Chennai. Kamal Haasan and Vijay Sethupathi joined the first schedule and shot for some important scenes. Their pictures from the set of the film are still doing the rounds on social media.

Now, Fahadh Faasil has also joined the sets. The actor took to social media and shared a picture of him with Haasan, which has now gone viral. In the picture, Faasil can be seen smiling for a selfie with Haasan.

Mounted on a huge scale, Vikram is a political thriller. The team is looking at wrapping up the entire film in a start-to-finish schedule. The Lokesh Kanagaraj directorial marks the first-time collaboration among Kamal Haasan, Vijay Sethupathi, and Fahadh Faasil.

Fahadh Faasil was last seen in the recently released Malayalam political drama Malik (2021) which premiered on Amazon Prime Video. Vijay Sethupathi was last seen in Uppena (2021). Apart from Vikram, Haasan is also working on his Tamil film Indian 2, directed by Shankar. The film, which also stars Kajal Aggarwal, Rakul Preet Singh and Siddharth, has faced several setbacks ever since hitting the shooting floor.