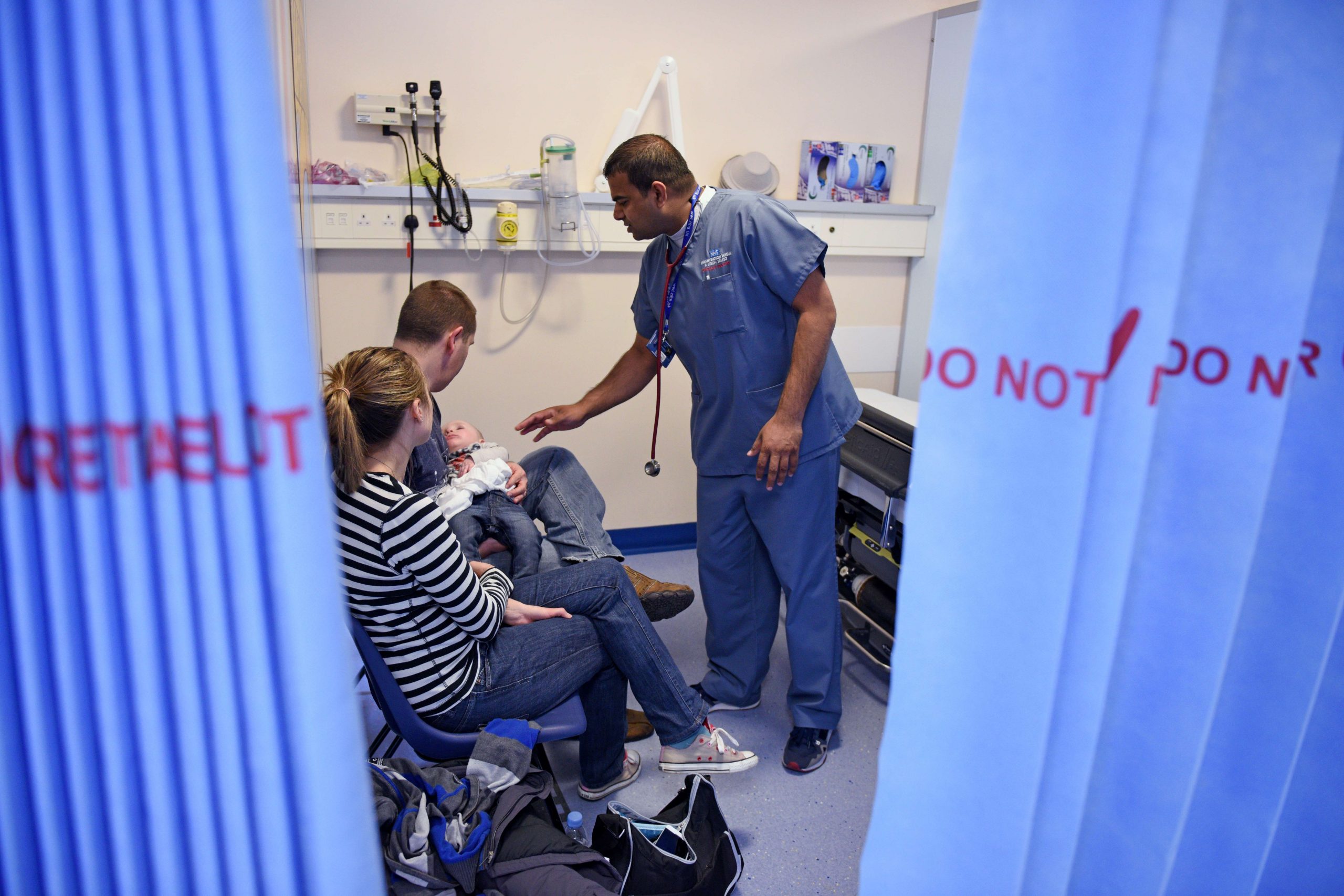 A doctor attends to a young patient in the specialist Children’s Accident and Emergency department of the ‘Royal Albert Edward Infirmary’ in Wigan. (OLI SCARFF/AFP via Getty Images)

SOUTH ASIAN doctors have told Eastern Eye that they are being stopped from treating some white patients.

Some have taken to social media to complain about white parents and white patients who refuse to be treated by them.

The phenomenon of so-called “white led care” is not new.

But disturbingly, Eastern Eye has learnt that senior managers are continuing to collude with, what doctors have described as, “racist parents and patients”.

That is despite the health secretary writing to NHS boards ordering them to refuse treatment.

“Somebody sent me a message on WhatApp only yesterday (20),” said Dr Ramesh Mehta, president of the British Association of Physicians of Indian Origin (BAPIO).

“When there was a repeat consultation, all people of colour people were removed, and the white doctors attended. I think that’s absolutely ridiculous, is not acceptable, not in this day and age or ever.”

The doctors’ union, the British Medical Association (BMA), said this was as much about patient care as it was about preserving the dignity of its members.

“No doctor should face discrimination at work for simply doing their job and trying to provide the best possible care to patients,” said the BMA chair, Dr Chaand Nagpaul.

“This should not [be] an expected additional burden of working in the NHS and being from an ethnic minority background. It’s totally wrong for any patient to discriminate against ethnic minority doctors.

“Whenever this happens, we would expect NHS trusts to take all appropriate action, including legal action. Racial discrimination is an issue of health, safety and care for all doctors in practice.”

But it is clear that some trusts are siding with white parents.

Last week (17) a paediatrician who is currently taking shared home-parental leave for 12 months to look after his children, Dr Zeshan Qureshi Tweeted, “Both the parents and the paediatricians are morally culpable for racism in this case. Paediatricians enabled racism, meaning an entire ED of doctors were deemed inadequate because none of them were white.

“This is only one example. I also know of a case on an inpatient ward where rotas have been rearranged for ‘white doctor’ led care.

“This is humiliating, unethical, and should be a never event. Paediatricians need GMC and RCPCH guidance on how to stand up to racist parents”. 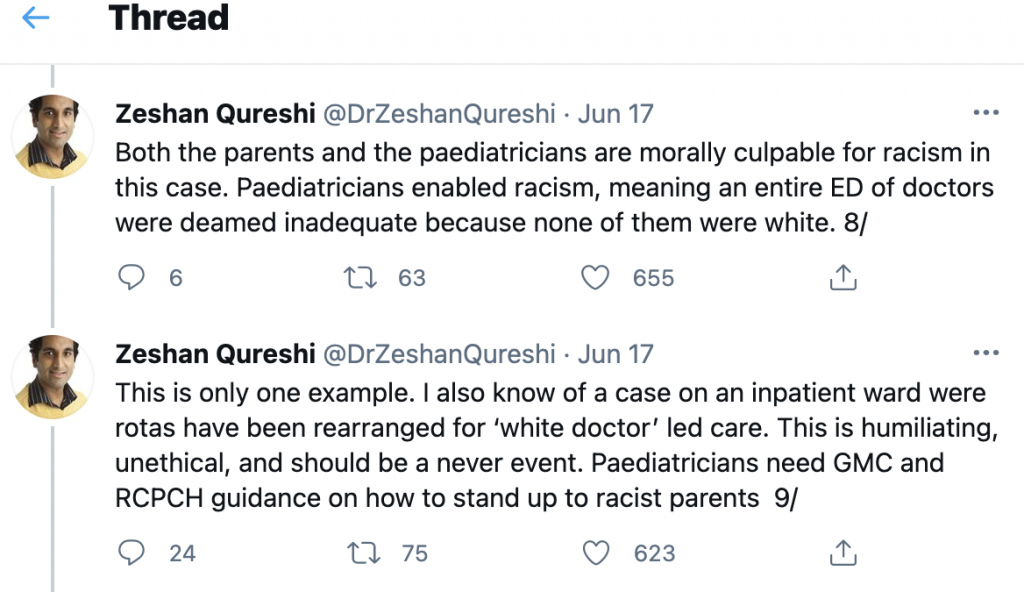 Robert Croos said, “As a junior doctor in Royal Devon and Exeter Hospital I faced the same in A&E dept. A white patient with abdominal pain, refused to be examined by me; gave the reason that I was not white.

“Consultant arranged a white doctor to attend without any qualm”. 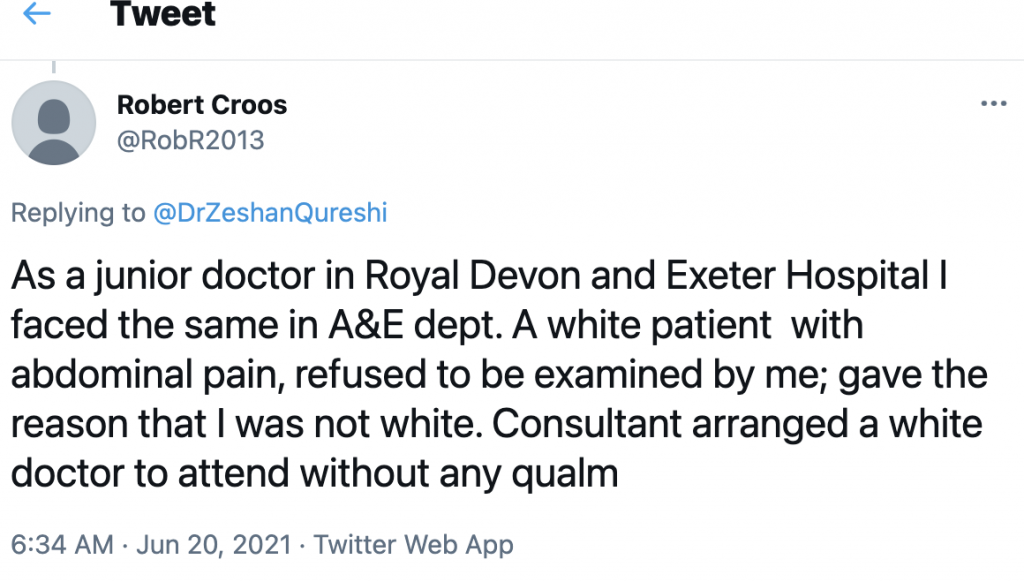 “Let’s be absolutely clear, this isn’t a problem with patients of all ethnicities looking for relatable doctors from their own community,” Dr Qureshi told Eastern Eye. “It is pretty much exclusively white patients getting white-led care.

“I am morally outraged that we live in a world where patients can legitimately think that forcefully demanding a white doctor is valid.

“It needs to be talked about more, and from the very top, stamped down on. I don’t want my children to grow up in a world where it is just accepted.”

One south Asian doctor, who spoke on the condition of anonymity told Eastern Eye, “A couple of years ago, I worked in urgent care. A patient said they didn’t want to be seen by a foreign doctor.

“Sadly, they got to see a white doctor rather than being thrown out. The worse thing is that I’m not even ‘foreign’.”

Non-white medics have raised this issue before.

In 2014, Nadeem Moghal wrote in the BMJ about his experiences of having white parents refusing treatment for their child from non-white doctors. The decision was eventually overturned by the trust’s board.

Just two years ago, the health secretary, Matt Hancock, wrote to NHS staff and employers that, “If a patient asks to be treated by a white doctor, the answer is ‘no’. … No one is entitled to choose the colour of the skin of the person giving that healthcare.” 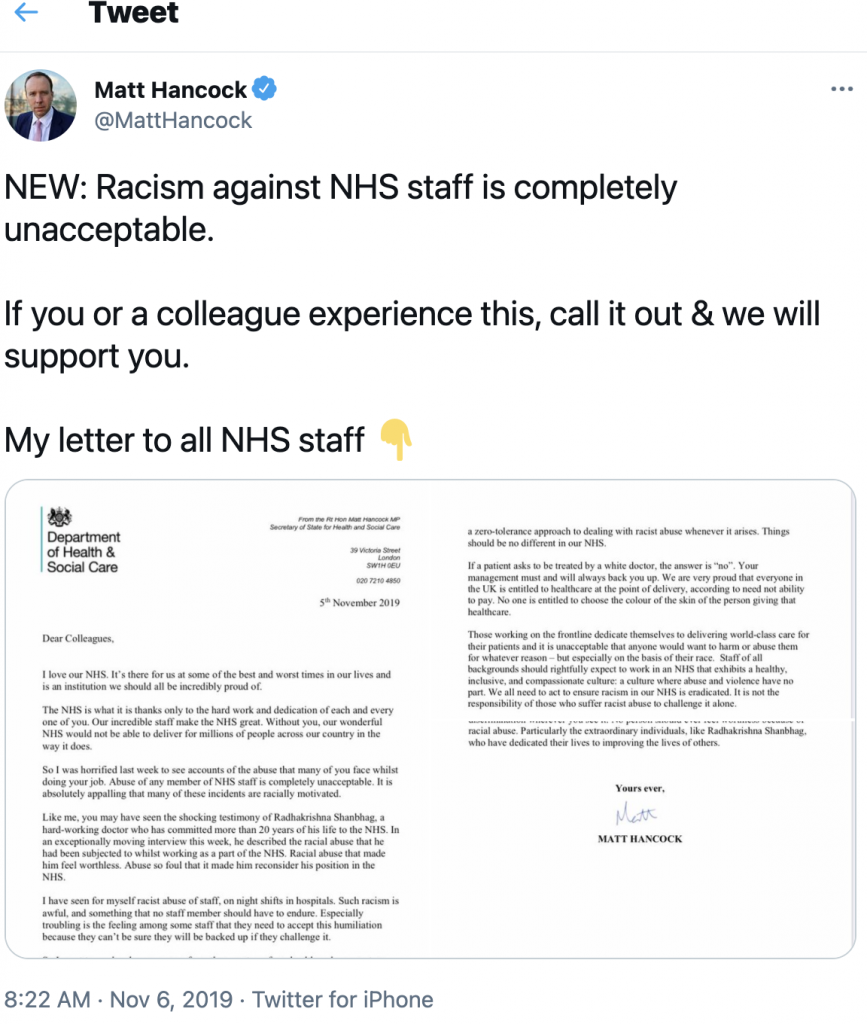 His letter was prompted by the experiences of trauma surgeon, Radhakrishna Shanbhag, who spoke movingly to ITV News that year.

The former deputy chair of the BMA, Professor Kailash Chand, said racism still existed in the NHS, and weak leadership was making the problem worse.

“It’s about the culture,” he said. “If the culture is so corrupted, so toxic, or, anti-race or anti-immigration, then how can we change laws?

Last year Eastern Eye revealed that in the Midlands and the north of England, at least 13 trusts had no ethnic minority representation.

These included Oldham, Manchester, Derby, Nottingham and Liverpool, all of which have sub­stantial non-white communities.

Dr Mehta said when he arrived in the UK in the 1980s, he faced some racism, but he found most Britons to be well-mannered and decent.

But he also blamed managers for allowing white patients to demand white doctors.

“There will be some abnormal people who may insist on that, but it is up to the management to ensure that this is not only not acceptable, but this cannot be encouraged,” he told Eastern Eye.

“They should have said, if you want to see this doctor you can get treated, otherwise we can’t treat you. The management’s responsibility here is the most important.”

He continued that the managers were unaccountable.

“Doctors have accountability to General Medical Council,” he said. “They are the regulators of doctors’ professional behaviour, while the managers do not have the regulatory body to ensure that they act professionally.

“This is this is a problem which we have raised many times and we will keep on raising.

For the chair of the BMA, Dr Chaand Nagpaul, it boiled down to respect and equality, the principles on which the NHS had been built, he said.

“No doctor would ever refuse to see a patient on the basis of their colour or background and it’s unacceptable that any doctor should suffer the discrimination and shame of a patient refusing to be treated by them because of their colour, ethnic background, or religious beliefs.

“The NHS simply could not survive without the incredible work of ethnic minority doctors.

“The expertise, skills and excellence that many of these doctors bring to the NHS should be celebrated and valued – not only does the NHS owe them gratitude, but also a duty of care.

“Ensuring that all doctors in our health service are treated with equality, dignity and respect must be a matter of priority.”

The Department of Health and Social Care said its NHS People Plan clearly sets out that “anyone who suffers, or witnesses, discrimination should report it.”

A spokesperson said, “There is zero tolerance of racism and prejudice in our health service.

“Healthcare staff should rightfully expect to work in an environment with a healthy, inclusive, and compassionate culture – one where there is no racial discrimination.”

Almost 75 per cent of hospital practitioner or clinical assistant roles were white. This is the highest percentage of white employees in any specific medical grade.

Asian doctors made up a higher percentage of specialty doctors at almost 43 per cent compared with the other senior grades.

Former deputy chair of the BMA, Professor Kailash Chand, told Eastern Eye that he feared the NHS would lose more well-qualified doctors if leaders did not tackle racism.

“If you give this kind of impression that you’re not welcome here, I really fear for the future of NHS.

“We already have suffered a hell of a lot with Brexit, when people from Eastern Europe were not welcome anymore, and quite a few of them exited.

“If we don’t welcome people from south Asian subcontinent or from the Caribbean countries, I don’t know what’s going to happen to health care in this country.”

For paediatrician, Dr Zeshan Qureshi, the message of zero-tolerance against any form of discrimination or racism needed to come from the very top.

“Senior leaders need to say no, strongly and unambiguously, to white-led care requests.

“Doctors don’t choose their patients. However, we also need to be clear that no minority doctor wants to be put in a compromised position where a racist patient is begrudgingly being forced to see them, potentially primed to be abusive, or to make a complaint.

“All doctors make mistakes. But when mistakes are reported, let’s say from a racist patient, or within an institutionally racist healthcare system, the uncomfortable truth is that white doctors are more likely to get away with it.”