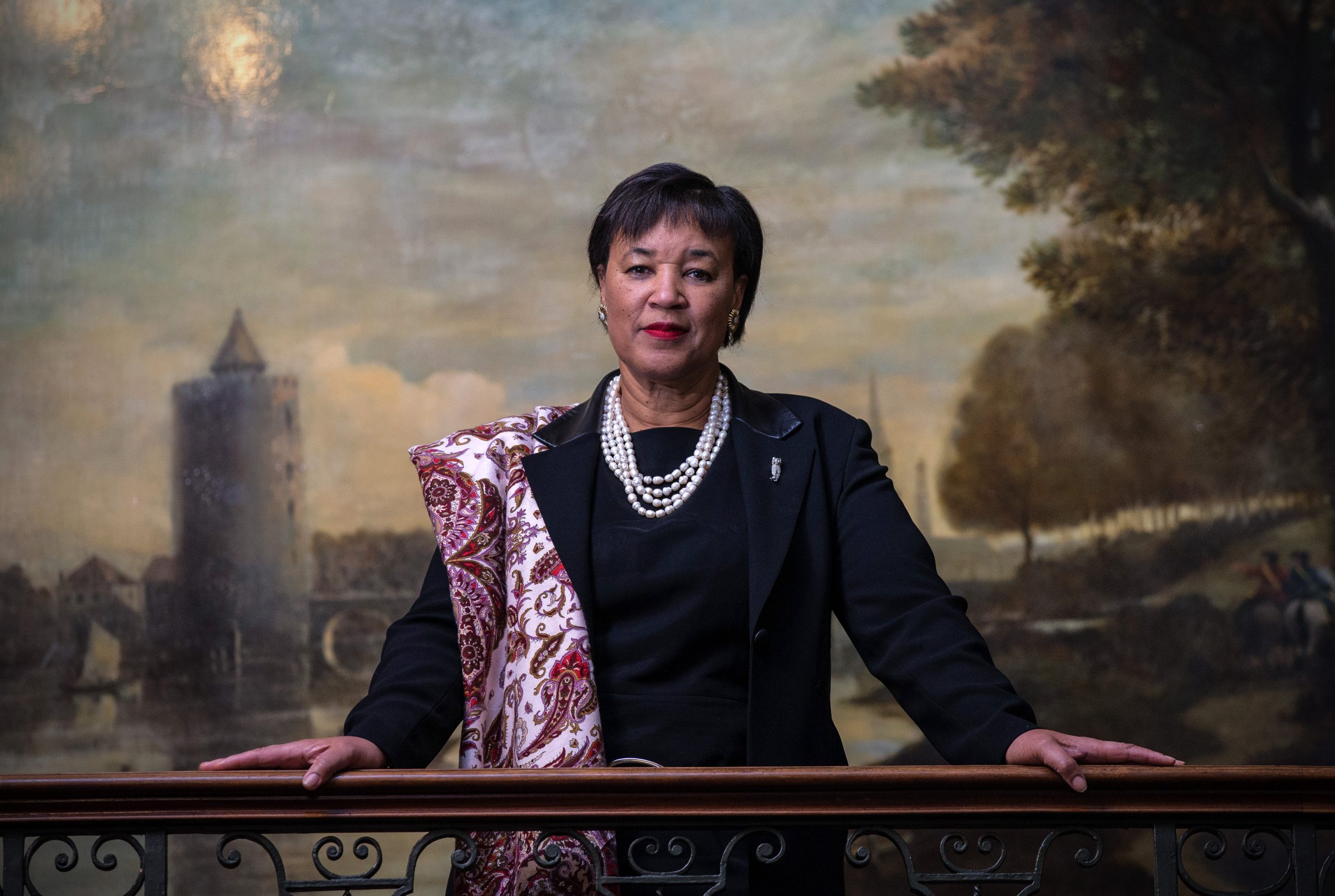 Senior Commonwealth sources have accused the UK government of “destroying the family because of a vendetta against the secretary-general”, Patricia Scotland.

In exclusive interviews on the condition of anonymity, non-British Commonwealth insiders outside the UK have alleged that the UK government “has put pressure” on poorer and developing nations to run a stalking horse candidate to stop Scotland getting an immediate second term.

“In the history of the Commonwealth no secretary-general has been bullied, intimidated or plotted against by the British as much as Patricia Scotland,” one non-UK civil servant told Eastern Eye.

“If we look back at what happened over apartheid in South Africa, with Margaret Thatcher and Sir Sonny [Ramphal], that was the lowest ebb for the Commonwealth.

“But this is far, far worse. From the moment the S-G took office, the ABC countries (Australia, Britain and Canada) have been hell bent in briefing against her.

“But the Brits have been briefing journalists, and it’s coming from the ‘foreign and colonial office’ and Downing Street.”

Eastern Eye understands the move is despite Kenyatta telling Scotland personally that “he would never put up anyone” to run against her.

Juma is being seen as a stalking horse to bring out more credible candidates.

But under Commonwealth tradition, it is still the turn of Caribbean countries to head the administrative arm of the organisation.

“We know that Britain has intimidated at least six member states,” another non-UK Commonwealth source alleged.

“These include the Pacific and Caribbean nations.

“They have said that we, Britain, pay the most into the coffers and we call the tune. If you don’t do as we say, we’ll cut your funds.

“That’s why Kenyatta broke his word. He’s been given something in return. Expect once this is forgotten new lucrative contracts and Covid vaccinations for Kenya.”

Eastern Eye has seen documents which show how the UK government has cut massively funding to Scotland’s organisation.

In the past decade, funding has shrunk from £54 million to £37m, a swingeing reduction of about a third (32 per cent).

In the past, the axed Department for International Development (DfID) would rate the secretariat.

Eastern Eye has documents which show that when Scotland took over in April 2016, the UK government rated it a C-grade.

By May 2018, DfID rated her organisation an A-plus.

The reported noted, “ComSec (Commonwealth secretariat) delivered an impressive performance in getting the agreement of the Board of Governors to both the new Strategic Plan and the underpinning Delivery Plan.

“Both documents were informed by a realistic set of forward financial assumptions and demonstrated an increasingly adept use of Results Based Management and SMART objectives. Difficult decisions needed be made and reaching agreement was tough.

“ComSec did so through a highly collaborative process and are to be congratulated on what they achieved.”

But that spirit of praise did not extend to the secretary-general.

Eastern Eye has learned than even though Scotland was working 20-hour days to energise and make the administrative arm viable again, she was being stopped at every turn by staff who plotted against her and “unfriendly” governments intent on belittling her efforts, briefing against her and battling to oust her the moment she walked into Marlborough House, the London headquarters.

“I worked for the S-G’s predecessor and then she came in,” said one former secretariat senior director no longer living in the UK. “It was like a whirlwind had hit the place. She’d been told by the UK that this was the last chance saloon, and S-G set about making reforms.

“Staff didn’t like the fact they had to work long, long hours.

“They didn’t like that she knew her mind, and that she looked after every family member, and that she didn’t kow-tow to the Brits, Aussies, Canadians.

“Time after time, the ABC group would brief that S-G was focusing on the wrong, but explain me this, what’s wrong with looking after those who need help the most?

“Isn’t that what good leadership is about? The ABC countries hated that she had her own mind. In all her dealings she was diplomatically assertive, and I never heard her raise her voice.

“I guess it also didn’t help that she’s New Labour with this UK administration.”

Another insider said, “All they did was criticise her leadership. They leaked to the BBC that she had a ‘tin ear’, code for not listening to them.

“But if having a tin ear means you’re effective and dedicate your waking and sleeping hours to the 2.4 billion people who make up a third of the world, then I’ll take that.”

They are also angry that the UK media and newspapers describe the secretary-general as “living a lavish lifestyle”.

“This grace and favour home she lives in has a posh address,” they said. “However, it’s falling down and in need to repair.

“No-one reports that every outgoing S-G puts together a list of what repairs are needed, all they concentrate on is the cost of a toilet-seat.

“I know that this S-G was livid when she learned about the extravagant plans made by a former adviser, and she put an immediate stop to it.

“But it was too late. Someone leaked the plans the British papers, so they got away with dubbing her as ‘Baroness Brazen’.

“Nothing could be further from the truth, there were no fancy chandeliers or expensive renovations.

“Even today, she calls in favours and her favourite word, being a barrister, is pro bono. She gets top people to work for free for the benefit of the 54 countries.”

If the UK government has a problem about her leadership, then it will not like the United Nations.

Eastern Eye has learned from two sources and a leaked document that the UN asked Scotland to help teach its teams about leadership.

Her team devised and delivered sessions, but they had to stop because of the global pandemic.

“She has signed memos of understanding, brought in private and public partnerships,” said one UK supporter.

“No-one can say the first woman to lead the Commonwealth has not achieved, and the UK wants to get rid of her?”

The first CARICOM-Africa summit is on Tuesday (7).

Insiders have told Eastern Eye that it would be “inappropriate” to discuss Scotland’s future, but they said the Caribbean and African nation states have repeatedly told Britain “to go away” when asked to put up a stalking horse candidate.

One member state told Eastern Eye, “Since the Baroness took over, she has made sure that The Gambia and Maldives returned to the family.

“She created a hub for innovations. She’s focused on things which matter, including the pandemic, climate change and human rights.

“The British spread fake news that Her Majesty the Queen was displeased with her.

“But I can tell you Her Majesty definitely supports her because she knows her SG is safeguarding the future of the thing she loves, the Commonwealth.

“So, what’s the problem, why do they hate her so much?”

Another said, “This is a betrayal by Kenya. The Caribbean has supported Kenya every step of the way, including international appointments.

What is the problem?

That question may not be simple to answer. What is clear to several insiders Eastern Eye spoke to is that Britain’s tactics have angered many member states.

“This is under-handed colonial tactics to divide and rule and split up the Commonwealth family of nations,” said a Commonwealth insider.

“What the British are doing will destroy what the monarch spent her lifetime protecting, because they have a vendetta against the secretary-general.

“That the UK government is doing this is shameful.”

According to one source, the hostility is because prime minister Boris Johnson’s administration is running scared.

“That special relationship with America is no more,” they said. “They sent a special envoy to speak with (former US president) Donald Trump’s administration to sign some deals and that never amounted to a pile of beans.

“They’ve made enemies with the European Union by Brexiting.

“Now, it the Commonwealth. They are desperate for business, and they see the S-G as the stumbling block, because she wants fairness and equity for every family member, not just the one puts in the most.

“At the end of it all, it comes down to trade, and Britain is struggling.”

Eastern Eye approached the Foreign Office (FCDO) several questions, including whether it was putting pressure on member states by threatening to withdraw funding if they did not put up candidates against Scotland.

Eastern Eye also failed to get a comment from the secretary-general.

It is understood that Baroness Scotland is in the Bahamas attending a Commonwealth Lawyers’ Association meeting.

But the government’s information service said Scotland had met its attorney general.

A source in the Caribbean said, “The secretary-general is simply getting on with her job and ignoring noises off-stage.

“She will be doing what she has done from the first day in office, working for the benefit of the Commonwealth family.

“Baroness Scotland has our full support, and her record and achievements in office speak for themselves.”