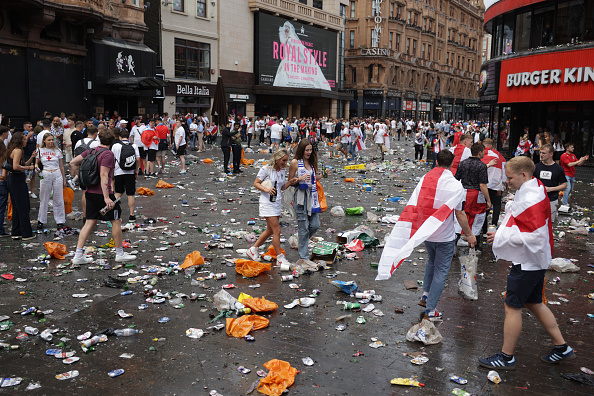 Football fans gather ahead of the match in Leicester Square on July 11, 2021 in London, United Kingdom. (Photo by Dan Kitwood/Getty Images)

ENGLAND must play their next home match in a UEFA competition behind closed doors following disorder at the Euro 2020 final at Wembley, European football’s governing body ruled on Monday (18).

The showpiece game between England and Italy on July 11 was marred by chaotic scenes as ticketless fans forced their way through security cordons to gain entry to the stadium.

In addition to the one-match sanction, UEFA has imposed a ban for a second game, which is suspended for two years.

The English Football Association (FA) has also been fined 100,000 euros ($116,000) over various issues including “lack of order and discipline inside and around the stadium” and the “throwing of objects”.

A statement from the FA said: “Although we are disappointed with the verdict, we acknowledge the outcome of this UEFA decision.

“We condemn the terrible behaviour of the individuals who caused the disgraceful scenes in and around Wembley Stadium at the Euro 2020 final, and we deeply regret that some of them were able to enter the stadium.”

The ban will apply to England’s first home game of the 2022/23 Nations League rather than next month’s World Cup qualifier against Albania as that fixture is governed by world governing body FIFA.

In July the FA commissioned an independent investigation into the security failings that allowed ticketless fans to force their way into the stadium.

Capacity for the final was capped at 67,500 due to coronavirus restrictions, but an estimated 200,000 people gathered near the stadium in the hours before England’s first major tournament final for 55 years.

“We are determined that this can never be repeated, so we have commissioned an independent review, led by Baroness Casey, to report on the circumstances involved,” the FA statement added.

“We continue to work with the relevant authorities in support of their efforts to take action against those responsible and hold them to account.”

UEFA president Aleksander Ceferin played down fears that the disorder would affect a UK and Ireland bid to host the 2030 World Cup in an interview with The Times last month, and said he saw Wembley as a key venue for UEFA in hosting club competition finals in the future.

There were further disturbances at Wembley last week when a crowd of 1,000 Hungarian fans clashed with police during a World Cup qualifier.