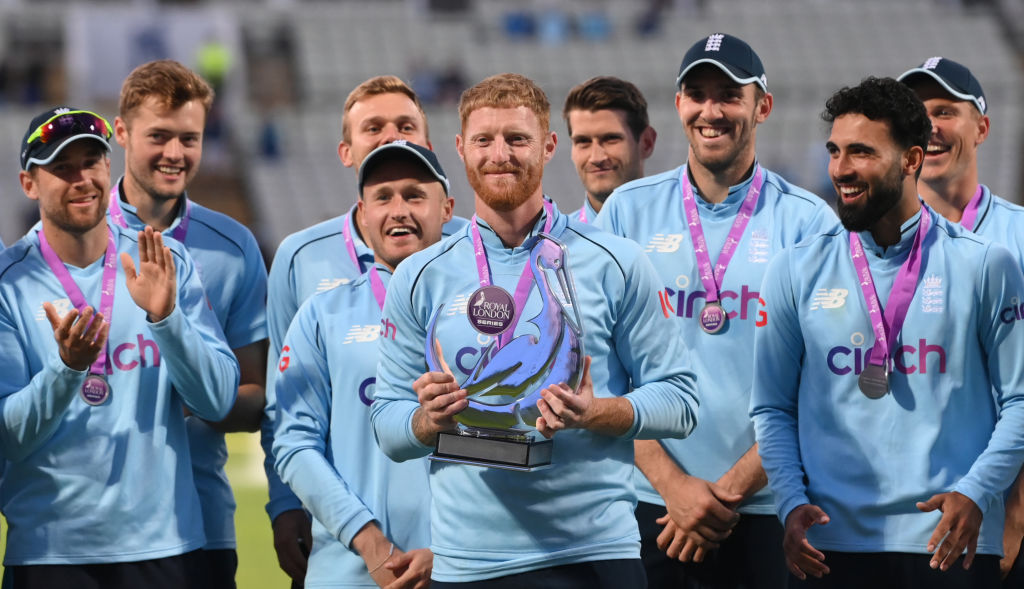 England captain Ben Stokes (c), player of the series Saqib Mahmood (r) and other players with the trophy after the third ODI between England and Pakistan at Edgbaston in Birmingham, England, on July 13, 2021. (Photo by Stu Forster/Getty Images)

JAMES Vince scored a fine century as England chased down a record target at Edgbaston on Tuesday (13) to complete a clean sweep of Pakistan in a three-match one-day international series.

England’s second-string team won the match by three wickets with two overs to spare, despite Pakistan skipper Babar Azam’s sensational knock of 158 earlier in the day.

Set a target of 332 for victory, Vince smashed 11 boundaries en route to his maiden ODI century (102) which guided England home as a sloppy Pakistan dropped catches and conceded runs through misfielding.

Opener Dawid Malan was sent back for a second straight duck in the series but Phil Salt (37) and Zak Crawley (39) attacked the bowlers to keep the chase on track, with the first 100 runs scored by the 13th over. They were both dismissed by Haris Rauf.

Skipper Ben Stokes (32) lived dangerously and was let off by Pakistan when he was dropped in the deep on 7 and 18 before a slog sweep off spinner Shadab Khan drew a faint edge to the keeper.

Vince built a 129-run partnership with Lewis Gregory, who contributed a crucial 77, before he was dismissed when Shadab caught a high, swirling ball as the all-rounder attempted to launch Rauf into the stands.

Gregory’s wicket, with 29 to get, gave Pakistan a lifeline but Craig Overton (18) and Brydon Carse (12) remained unbeaten to guide England home amid a celebratory mood in the stands at Edgbaston.

Earlier, England chose to field and Saqib Mahmood (3-60) gave the hosts an early breakthrough when Fakhar Zaman edged to third slip. But Imam-ul-Haq (56) and Azam stitched together a 92-run partnership.

Spinner Matt Parkinson bowled a peach of a delivery that turned off the pitch and breached Imam’s defence to smash into his middle stump, with the crowd roaring its approval when the replay was shown on the big screen.

Mohammad Rizwan arrived at the crease and steadily increased the run rate, building a crucial 179-run stand with Azam and he hung around until the 46th over, when he edged a short ball from Carse to the wicketkeeper to be dismissed for 74 off 58.

Pakistan’s wickets started falling in a heap as Carse (5-61) cleaned up the middle order and Azam, sensing he was running out of partners, fell in the final over when he was caught off a top edge while going for a big shot.

Azam, who is ranked number one among batsmen in ODIs, fell 15 runs short of 4,000 runs and the crowd gave the 26-year-old a standing ovation as he walked back to the pavilion.

England next play Pakistan in three Twenty20 matches before hosting India in a five-match test series.