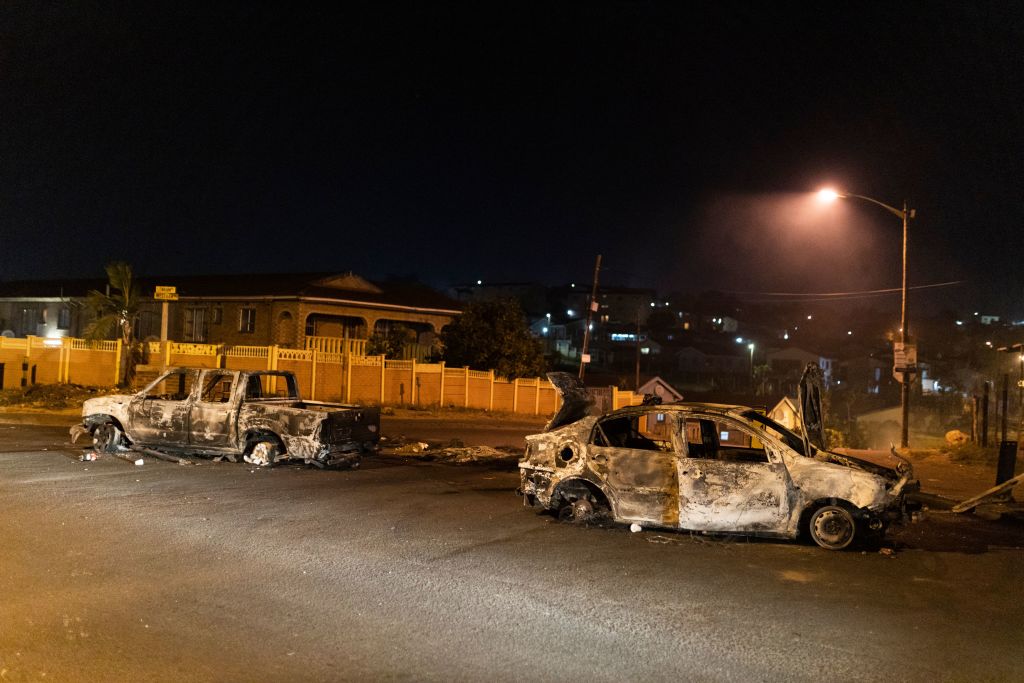 Charred remains of two vehicles seen in Phoenix Township, North Durban, on July 15, 2021 after days of violence in the community. Understaffed and heavily reliant on private security companies, the police was rapidly overwhelmed when riots and looting first flared in the southeastern province of KwaZulu-Natal, sparked by the jailing of graft-accused former president Jacob Zuma. (Photo by GUILLEM SARTORIO/AFP via Getty Images)

EMIGRATION consultants in South Africa have reported a huge surge in enquiries from South African Indians following the violence and looting that wrecked KwaZulu-Natal province in July.

The province is home to about a third of South Africa’s 1.4 million citizens of Indian origin, largely descended from the first settlers who arrived as indentured labourers and merchants in 1860.

Nicholas Avramis of Beaver Canadian Immigration Consultants, an emigration company that specialises in Canadian applications from South Africa, told the website businessinsider.co.za that it expects its client base, which was about 10 per cent Indian until July, to quadruple to 40 per cent before the end of this year.

Avramis said there was particular interest from female-headed and extended families with cash or businesses that can be relocated.

Other consultants said there was also increased interest in emigration to Australia and the UK.

“We believe there is still a huge, huge level of interest in getting out of the country,” Robbie Ragless, managing director of New World Immigration, told the website.

There also appears to be unprecedented enquiries about emigration to mainland Europe, something previously of little interest in the Indian community, agents said.

India’s missions in South Africa could not provide details but a source said there had been a doubling of enquiries about the OCI (Overseas Citizenship of India) card after the July unrest.

Highly popular among overseas Indians, the OCI card provides long term visa-free travel and stay in India and gives the cardholders a host of privileges normally not given to foreign nationals. So far, India has issued about 3.77 million OCI Cards.

The agents emphasised that the enquiries need not necessarily translate into actual migration, as not everyone who seeks information goes through with it.

The increase in emigration enquiries started following the massive looting and arson in July when protests about former president Jacob Zuma starting a 15-month sentence for contempt of court degenerated into widespread violence. He has since been released on medical parole.

Many of the businesses that were either stripped bare, with even ceilings and counters carried away or burnt, belonged to Indians. Some had stakes in national or multinational corporations that were affected.

President Cyril Ramaphosa had called the incident “a failed insurrection”, as police failed to take action for several days until he called in the army to quell the unrest.

Tensions also continue in the greater Durban area between Indian and black communities after vigilantes in the mainly Indian suburb of Phoenix killed more than 33 black people who entered their township during the unrest. Some were reportedly trying to get to their workplaces in Phoenix.

The trial of about three men charged with alleged murders is continuing, with protests on both sides occurring daily outside the court.