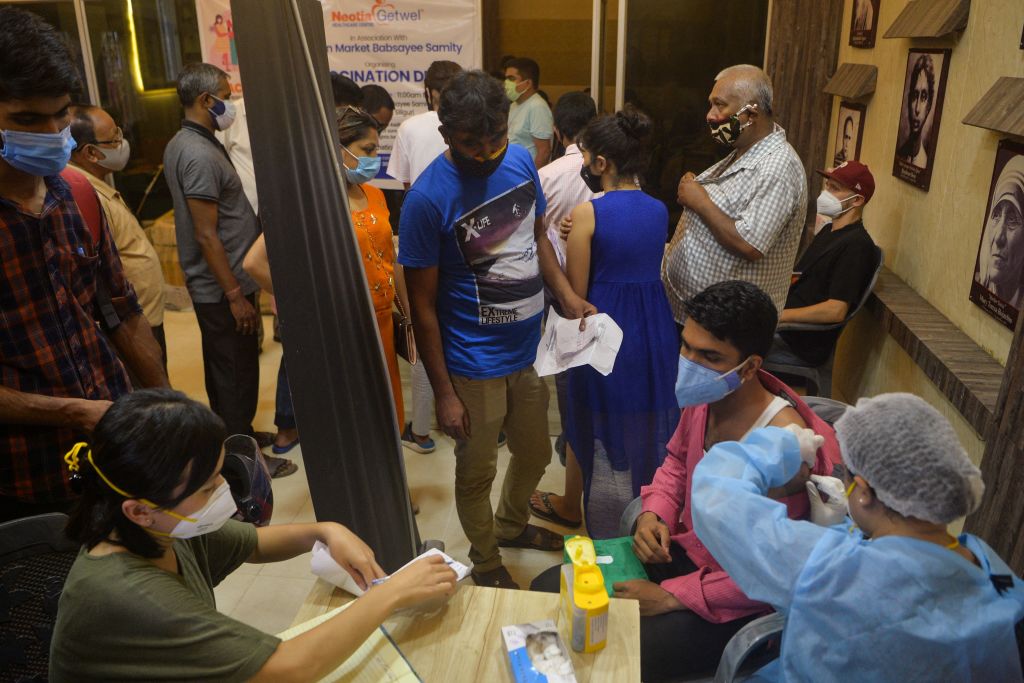 A health worker inoculates a man with the Covid-19 coronavirus vaccine as others queue up and wait for their turn at a camp set up in a market association’s office in Siliguri on June 22, 2021. (Photo by DIPTENDU DUTTA/AFP via Getty Images)
Follow Us

INDIA’s health ministry on Wednesday (23) said that around 40 cases of the Delta plus variant, classified as a variant of concern (VOC), were detected in Maharashtra, Kerala and Madhya Pradesh states.

Delta variant as well as all Delta sub-lineages including Delta plus are classified as VOC, it added.

“As of now, among the samples sequenced (45,000+) in India, Delta plus variant or AY.1 has been observed sporadically in Maharashtra, Kerala, and Madhya Pradesh, with around 40 cases identified so far and no significant increase in prevalence,” the ministry said in its statement.

These three states have been advised to strengthen surveillance and take appropriate public health measures.

After the report of the Delta plus variant by the Public Health England (PHE) on June 11, a retrospective analysis of samples revealed the first occurrence of this lineage from a sample collected from Maharashtra.

The sample was collected on April 5. As of June 18, 205 sequences of the variant lineage were detected worldwide, with the US and the UK having over half of the known cases, the statement said.

The Indian SARS-CoV-2 Genomic Consortia (INSACOG), an Indian consortium of 28 labs, has reported the evolution of the Delta plus variant (B.1.617.2) + K417N lineage of SARS-CoV2 called B.1.617.2.1/ AY.1. The Delta plus variant is characterised by the K417N mutation in spike protein, the statement said.

The spike protein aids the virus to gain receptor-mediated entry into human cells.

According to the ministry, there are other Delta plus variants with other mutations. The AY.1 is the most well-known. A second variant found in sequences uploaded to GISAID from the US is now designated AY.2, but is not seen in India yet, the ministry said.

“All Delta sub-lineages are treated as a variant of concern, although properties of Delta plus are still being investigated. Currently, the variant frequency of Delta plus is low in India. Cases with the variant were mostly reported from nine countries of Europe, Asia, and America,” the ministry added.