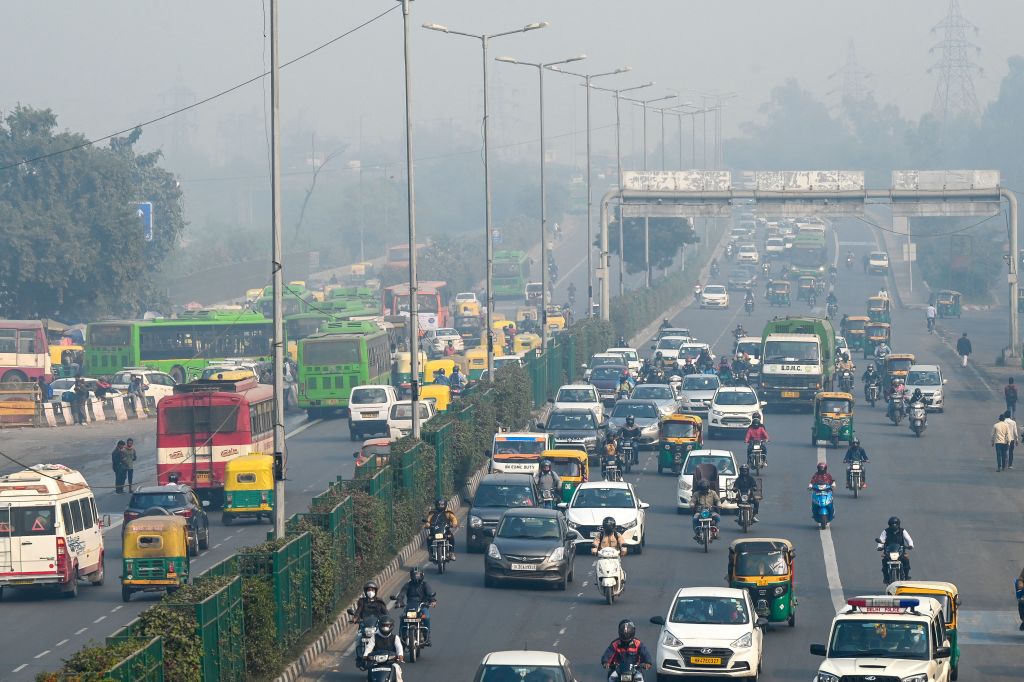 People commute along a street in vehicles amid smoggy conditions in New Delhi on November 19, 2021. (Photo by PRAKASH SINGH/AFP via Getty Images)
Follow Us

INDIA’s capital is consistently ranked the world’s worst capital for air quality and on its most polluted days the smog can cut visibility on the roads to barely 50 metres.

Levels of PM2.5 pollutants — the microparticles most harmful to human health, which can enter the bloodstream through the lungs — last week reached more than 30 times the maximum daily limit recommended by the World Health Organization.

“The pollution causes a lot of problems for my throat. My eyes sting… My lungs are affected, which creates breathing problems. Mucus builds up and collects in my chest.” said Bhajan Lal,58, an auto-rickshaw driver, was diagnosed with Chronic Obstructive Pulmonary Disease, a progressive condition that gradually limits airflow to the body.

“I feel so sorry looking at children and their health. They are already getting sick.”

Vivek Nangia, Lal’s doctor, said: “If he doesn’t take the regular medication now, he will go into a state where the airways will go narrowing and narrowing, and progressively worsening.”

Factory emissions, vehicle exhausts and crop-clearing fires from farms in neighbouring states combine to cast the city of 20 million people in an otherworldly coat of yellow-grey haze near the end of each year.

Piecemeal efforts to mitigate the smog, such as a public campaign encouraging drivers to turn off their engines at traffic lights, have failed to make an impact.

“I don’t know from where the solution will come for this pollution, which is killing us,” said Delhi resident Vijay Satokar. “We have become a gas chamber.”

This week authorities took the drastic step of ordering six of the 11 coal power plants in Delhi’s vicinity to close down until further notice.

City officials also shut schools indefinitely, barred trucks except those carrying essential goods from entering the capital until next week, and told civil servants to work from home.

But they stopped short of accepting a call by India’s Supreme Court to declare the city’s first “pollution lockdown”, which would have restricted the population to their homes.

Smog is blamed for more than a million deaths in India annually, and a recent University of Chicago study found that air pollution was likely to reduce life expectancy by more than nine years for four in every 10 Indians.

Authorities have struggled to address the root causes, with national coal consumption nearly doubling in the last decade.

Rural agricultural workers meanwhile constitute a powerful voting bloc and year-end farm fires — the cheapest way to clear fields before the next growing season — continue unabated despite a ban two years ago.

Winters in the capital once appreciated for their mild weather after the long and scorching summer months, have become an annual endurance test for its inhabitants.