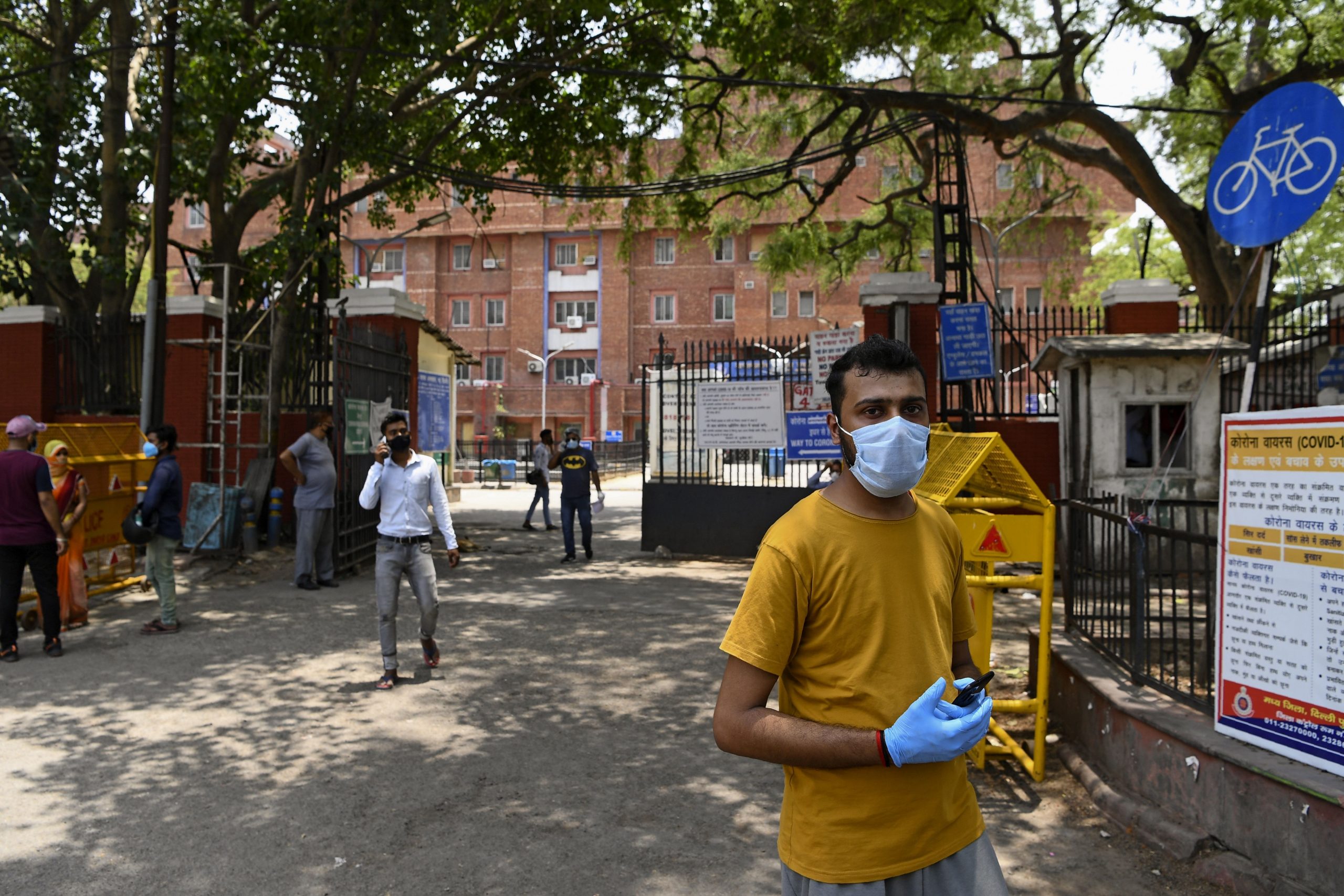 This photo taken on June 11, 2020 shows relatives of a patient suffering from the COVID-19 coronavirus walking out from the entrance of the Lok Nayak Jai Prakash (LNJP) hospital in New Delhi. (Photo by SAJJAD HUSSAIN/AFP via Getty Images)
Follow Us

Ashwani Jain succumbed to the coronavirus in an ambulance as his family pleaded with several hospitals to take him in, the latest victim of the pandemic sweeping through the Indian capital and exposing a deadly shortage of hospital beds.

“They don’t care whether we live or die,” said his 20-year-old daughter Kashish, whose uncle, Abhishek, sat with Ashwani in the back of the vehicle on its desperate journey across Delhi.

“It won’t matter to them but I have lost my father, he was the world to me,” she said, tears welling up as she showed a photo of him.

All of the hospitals the 45-year-old businessman’s family tried refused to admit Ashwani, even though an app set up by the city government indicated Covid-19 beds were free, Abhishek told AFP.

With surging infections highlighting the precarious state of the Indian healthcare system, the death of Jain and others like him have heightened anxiety in Delhi over the growing threat.

More than 1,200 have died from the virus in the Indian capital and more than 1,000 new cases are being reported each day.

Mortuaries are overflowing with bodies and cemeteries and crematorium staff say they cannot keep up with the backlog of victims. Some local Delhi councils say the real death toll is twice the number given by the regional government.

Indian media has been full of tragic stories of people dying after being turned away by hospitals.

One pregnant woman died as she was being shuttled between hospitals. A 78-year-old man petitioned the Delhi High Court for a ventilator bed but died before the matter could be taken up.

Several families have used social media to recount their harrowing experiences after being refused hospital beds.

Jain’s family had joined a noisy, nationwide tribute to health workers, banging pots and pans from rooftops and balconies after a nationwide lockdown started in March. Now they feel abandoned.

“The government is doing nothing. They are just playing with our feelings,” Kashish said.

Jain’s devastated relatives are now waiting to get tested themselves but the Delhi government allows that for only high-risk and symptomatic family members.

The city government has estimated that it could need 80,000 beds by the end of July, and warned hotels and wedding venues that they are likely to be turned into hospitals.

But families say they are being forced to spend a small fortune for the few beds that are available.

Suman Gulati, whose father is a coronavirus patient, said she was asked for one million rupees ($13,200) by a private hospital for a bed.

“Once I paid the money getting a bed was not a problem. But arranging such a huge amount of money at such a critical time was,” she told AFP.

“What if I fall sick next, what will I do? Should I sell my property, my jewellery?”

A sting operation by the Mirror Now TV channel showed five Delhi hospitals asking coronavirus patients to pay up to $5,250 in order to be admitted.

On Sunday, Home Minister Amit Shah said 500 of some 20,000 train coaches reserved as coronavirus wards would be “immediately” allocated to the state by the national government, adding some 8,000 beds.

Experts are questioning the city’s handling of the pandemic however.

Virologist Shahid Jameel said Delhi, like other major cities, has not tested enough people. So far, it has covered just one percent of its population.

“At the moment Delhi government is doing everything to make people panic,” he told AFP.

“It should be testing aggressively. I don’t understand the logic of testing only people who are symptomatic. How will you find how much the infection has spread in the community if you don’t test them?”

Shah said after a meeting with the Delhi government Sunday that testing for the virus would be stepped up.