Surya produced yet another incredible knock in the shortest format – a 51-ball 112 not out — as India outplayed Sri Lanka by 91 runs in the third T20I to secure a memorable 2-1 series win here on Saturday (7). 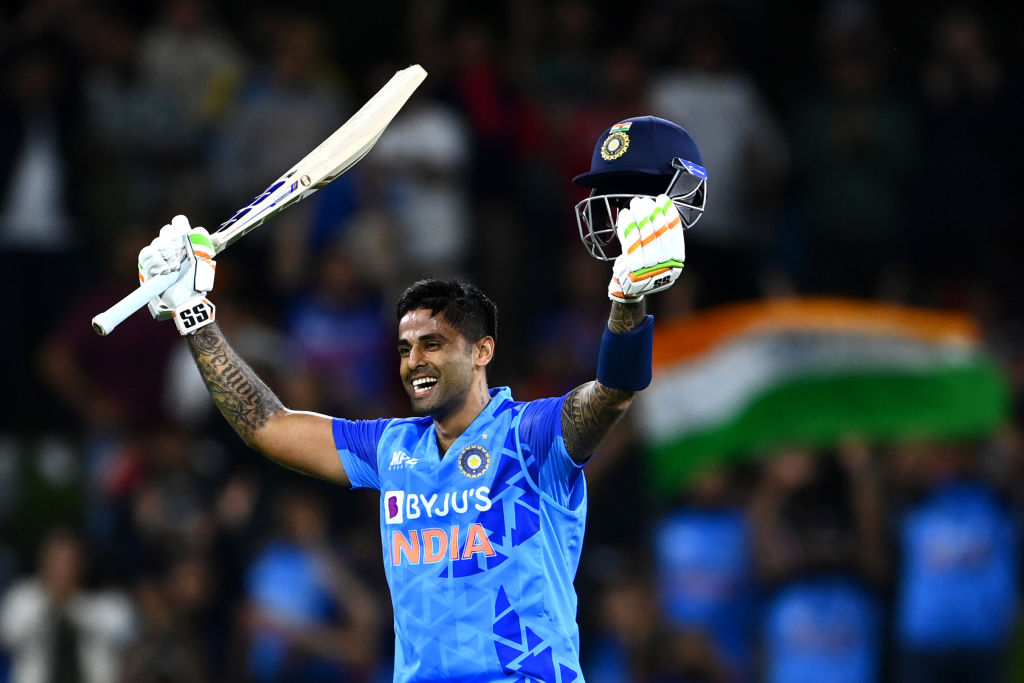 Suryakumar Yadav of India celebrates after scoring a century during game two of the T20 International series between New Zealand and India at Bay Oval on November 20, 2022 in Tauranga, New Zealand. (Photo by Hannah Peters/Getty Images)
Follow Us

Suryakumar Yadav was well past 30 when he made his India debut, but the swashbuckling batter says his belated selection had only strengthened his resolve and made him even hungrier to succeed in top-flight.

Surya produced yet another incredible knock in the shortest format – a 51-ball 112 not out — as India outplayed Sri Lanka by 91 runs in the third T20I to secure a memorable 2-1 series win on Saturday (7).

“It does make me even more hungrier (sic) now,” Surya told India head coach Rahul Dravid when asked if the long wait has taught him to value his success a lot more.

“I mean the amount of domestic cricket I have played, I have always enjoyed playing that for my state side Mumbai and I always try to put up a show.

“Enjoyed batting even there as well. Yes it was a little challenging in the last few years but kept telling myself this is why you play this game, enjoy it, the passion for this game kept me driving so I just kept going.” The interaction between the two was organised by BCCI TV.

“It is lovely to have someone here with me who, as a young kid growing up, did not watch me bat. And I hope you didn’t, I am sure you didn’t,” Dravid started the chat on a lighter note, to which Surya replied, “No, I did watch (you bat).” Surya’s batting is a stark contrast to the way Dravid played his cricket, and the former India captain was alluding to that only.

Dravid then asked if he could pick one or two knocks that he feels are his best.

“It is actually difficult for me to pick any one innings… I enjoyed batting in all the difficult situations where I went into bat. I just enjoyed myself, whatever I did in the last one year. I have been doing the same thing again.

“As I said before as well, I just try to enjoy and express myself as much as possible. In those difficult situations, teams try to pull the game off. I try to take the game on. If it works well for me and the team, I’m happy,” said Surya.

The middle-order batter’s century was his third in the format in just seven months, making him the first player in the history of the game to score three T20I hundreds when not opening the batting.

So how many shots from his bat are pre-determined? “I mean obviously in this format you have to be a little bit pre-determined, and at the same time you have to have another stroke as well if the bowler is a step ahead of you during that time. But yes, I try to play to the field what fielders are in, what bowler can bowl at that time and it works out.” “If I am meeting the ball really well or I mean I try and set the field for myself whenever any left-arm spinner or leg-spinner or fast bowler is bowling and just try and time the ball as much as possible.” Surya also credited his family for his immense success in recent times and Dravid, who was in charge when the batter was finding his feet at the India A level for years, lauded the role played by his folks.

“I mean the role of the family has been most important in my cricketing journey till now. When I started playing cricket, they were the ones who helped me out of the box. Because my dad is an engineer, so in my family there is no history of sports. I had to be a little different for him to see a spark in me and push me.

“They have sacrificed a lot and obviously my wife. After we got married she’s been pushing me really hard in terms of nutrition and in terms of staying fit.

“We have been talking about cricket a lot when I go back home and we discuss how we can do better, how we can be one step ahead at this level and we really enjoy doing that.” Dravid concluded the interaction by saying, “Long it may continue.”