Covid survivor: ‘I have been given a second chance in life’ 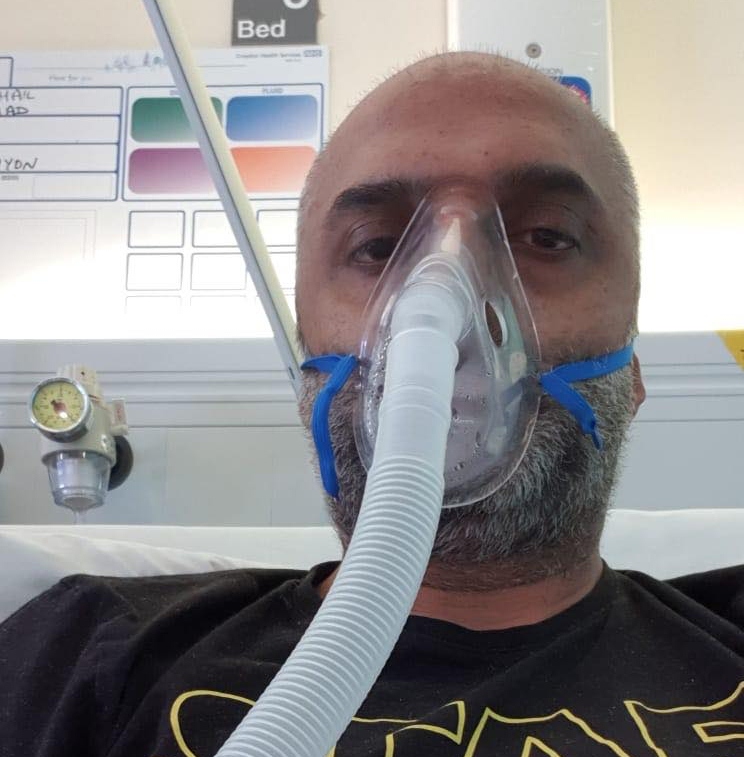 A BRITISH-ASIAN man recovering from Covid-19 has said he has been “given a second chance in life”, after spending more than 20 days in an induced coma.

Sohail Anjum, 47, was diagnosed with coronavirus in March. He was later told he only had a 50 per cent chance of survival, and spent 23 days in an induced coma in an intensive care unit (ICU).

Sadly, his mother Rashida died from the disease while Anjum was in ICU. Now recovering at home in Croydon, Anjum has reflected on his near-death experience.

“At one point, I was told it was touch and go,” he told Eastern Eye last week. “(Doctors) didn’t know which way it would end up. I was very fortunate to pull through. I most definitely think I’ve been given a second chance in life.”

Anjum, a professional photographer, believes he caught the virus while travelling to work on public transport during rush hour. His symptoms began at the beginning of March – he started having migraines and had an itchy throat.

“I thought it was strange as I have never suffered from migraines before, but coronavirus was still in its early stages. There wasn’t a lockdown at that point,” he explained.

However, his condition worsened and eventually he was sent home from work. Although Anjum said he contacted his GP and the 111 service several times, they dismissed his concerns.

“I was told it sounded like a nasal viral infection or a flu-like virus,” he recalled. “My GP told me to rest and I would be fine.

“But the weekend came and my symptoms began getting worse. My fever went up and I developed a cough.”

On March 20, he started having shortness of breath. His GP advised him to wait a few more days before going to hospital, but Anjum was so worried by his symptoms that he decided to go straight to A&E in Croydon University Hospital. Once there, things moved fast. He was sent to a ward with other patients who were battling the virus.

Two people succumbed to Covid-19 during his time on the ward. At one point, a man in the bed beside Anjum became frantic and told nurses he didn’t want to die.

“Later, the nurse came in to take his observations, and all I could hear was, ‘oh Jesus, oh no’, and one of the other nurses said he had no pulse,” he said. “There was nothing they could do.”

Within days of being admitted to hospital, Anjum was told he needed to be put into an induced sleep. “I don’t remember a thing after that,” he said. “It is like going into an operation when they put you to sleep and they wake you up after a few hours. Only in my case, I woke up a month later.”

When he came out from his coma, he received devastating news – his elderly mother had passed away from Covid-19.

When he was on a ventilator, the outlook looked bleak. Anjum’s oxygen requirements were at 80 per cent and he contracted septicaemia, but then his vitals started improving.

“That was when the doctors had a bit of hope and that’s when they decided to take me off the ventilator,” he said. According to Anjum, “it was my mum’s prayers that pulled me through”.

He added: “Even the doctors and nurses were surprised and they said how lucky I was. A lot of people who go into ICU don’t make it out.”

Data has shown that coronavirus has had a disproportionate impact on the BAME community. Research by the Intensive Care National Audit & Research Centre (ICNARC) in May found that black and Asian patients are up to 17 per cent more likely to die in intensive care than white patients.

Despite the increased risk, Anjum believes that many in the BAME community do not fully comprehend the threat of Covid-19. He blames this on the lack of clear messaging from authorities. He also thinks the government should have implemented the lockdown earlier than they did.

“It was too late,” he said. “An earlier lockdown could have prevented hundreds of fatalities.”

Now recovering at home with his wife and father, Anjum admitted his progress has been “slow”. He lost 11.5 kg while in hospital and is focusing on building up his weight.

His muscles were dormant during his time in ICU, which means he needs to build up strength in them again. As he is unable to squat or bend down, the NHS has installed a specialist chair in his bath and facilities to help him walk up the stairs.

“It’s going to take a bit of time before I am fully recovered,” he said.

Although he has been retested and confirmed negative for the virus, Anjum is still cautious about how much contact he has with his 85 year-old father. “I’m still very weak and vulnerable, so I do have to make sure that I stay away from him,” he said.

Anjum is also still processing the death of his mother. “I have to get used to not seeing my mum or hearing her voice,” he said. “I think I will only be at peace once I visit her grave.”