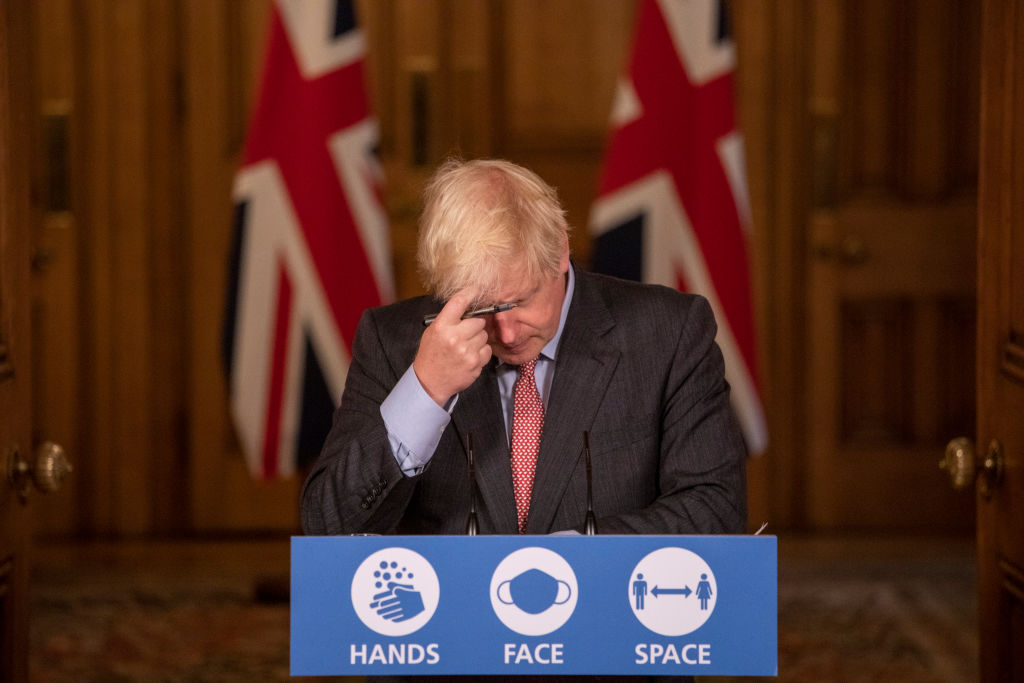 "So, Boris Johnson will enter the Conservative party conference with support among party members for his Covid-19 policy having deteriorated sharply, if our survey is anything to go by," ConservativeHome editor Paul Goodman says in a blog. (Photo: Jack Hill/Getty Images)

BORIS JOHNSON faces mounting unease from his Conservative rank and file over the coronavirus pandemic as the party opens its annual conference on Saturday in a quieter virtual format.

Instead of the usual tub-thumping speeches in cavernous halls and crowded drinks gatherings, the party faithful will follow proceedings online, depriving the prime minister of a chance to deliver one of his barnstorming turns.

But that may be a blessing in disguise, with polls suggesting he is increasingly becoming the target of public disquiet over the government’s handling of the coronavirus pandemic, as a second wave worsens what is already the highest death toll in Europe.

According to a survey by the ConservativeHome news site, support has slumped among party members for mandatory lockdowns, and more now favour a Sweden-style approach that emphasises voluntary social distancing.

Just under half of respondents now prefer the Swedish policy, up from one-third in May, when Britain was three months into a nationwide lockdown during the first wave of Covid-19.

“So Boris Johnson will enter the Conservative party conference with support among party members for his Covid-19 policy having deteriorated sharply, if our survey is anything to go by,” ConservativeHome editor Paul Goodman wrote in a blog.

“This decline in confidence echoes that seen in polls of the public as a whole, though support for the government is obviously higher, and reflects the fall in the prime minister’s own rating that our recent surveys have found.”

It is a far cry from last year, when Johnson became Conservative leader and won a general election vowing to “get Brexit done”, after years of parliamentary deadlock on how to implement British voters’ decision in 2016 to quit the European Union.

The EU is now pursuing legal action after Johnson’s government pushed legislation through the House of Commons to bypass the bloc on future trading arrangements within the UK, in breach of the two sides’ divorce treaty.

The controversy has caused alarm among Conservative lawmakers who are worried about the damage to Britain’s reputation as a defender of the rule of law.

But bashing Brussels is normally lapped up by the party faithful — and Johnson has traditionally been its main exponent.

Last year, he brandished a plastic-wrapped smoked kipper at delegates to condemn EU health and safety rules and red tape, no matter that the packaging had nothing to do with Brussels.

For party members and the public at large, the EU spat is completely overshadowed by the pandemic, as a surging caseload compounds fears of a winter crisis for Britain’s overstretched health service.

But in combatting the renewed outbreak, Johnson has been accused by some of his own lawmakers of governing by diktat, and they have been rallying around his popular chancellor, Rishi Sunak.

Sunak, who is gaining a reputation for slick presentation, will deliver a keynote address on Monday, before Johnson closes the conference on Tuesday.

“One speech — even a Boris tub-thumper — is never enough to turn things around if the facts on the ground say something different,” commented Tim Bale, professor of politics at Queen Mary University of London.

“The only upside for Johnson is that taking the whole thing online means that conference this year doesn’t provide the kind of opportunity it otherwise might for his worried colleagues to grumble and even begin to wonder aloud — over some disappointingly warm white wine and uninspiring stale sandwiches — whether they should start to think about replacing him sooner rather than later,” he told AFP.

Foreign Secretary Dominic Raab is the headline speaker on Saturday’s opening day, as Britain gears up for a new life free of EU rules from January 1, with or without a trade deal.