“I think Conservative MPs have got to get rid of him today,” Ed Davey, leader of the Liberal Democrats told BBC TV. 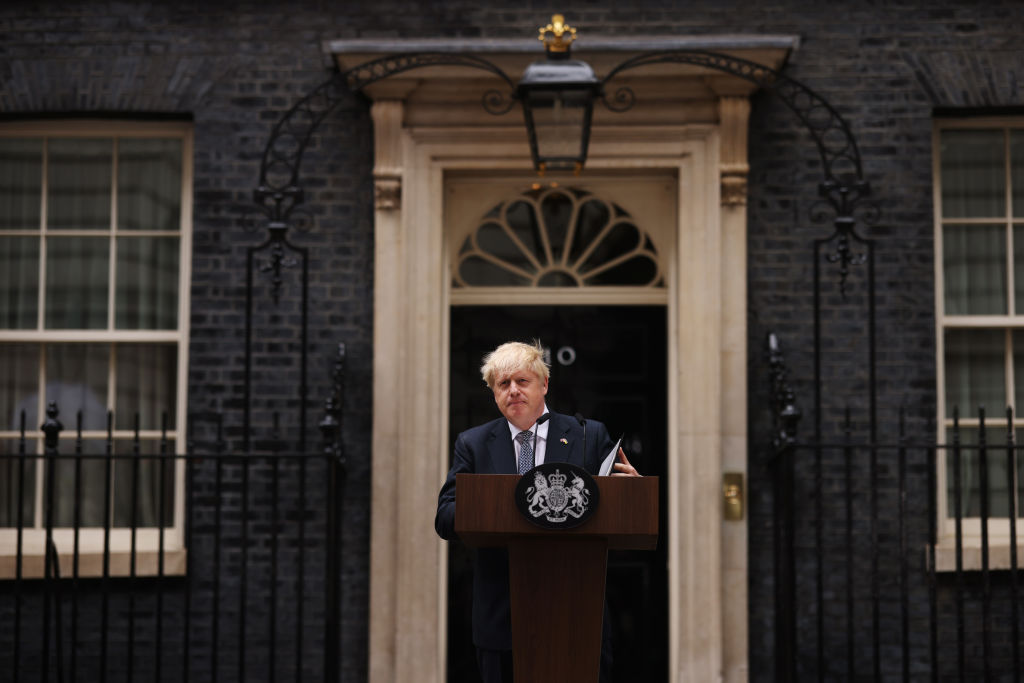 UK Prime Minister Boris Johnson addresses the nation as he announces his resignation outside 10 Downing Street, on July 7, 2022 in London, England. After a turbulent term in office, Boris Johnson will resign from his roles as Conservative Party Leader and Prime Minister today after coming under pressure from his party. Eton and Oxford-educated Alexander Boris de Pfeffel Johnson, MP for Uxbridge and South Ruislip, was elected as Prime Minister in the 2019 General Election. (Photo by Dan Kitwood/Getty Images)
Follow Us

As many as a dozen candidates were on Friday eyeing up replacing Boris Johnson as British prime minister who is quitting after his Conservative Party turned on him, as opponents said they wanted him out of Downing Street immediately.

Johnson said on Thursday that he would step down as Conservative leader and British premier following resignations by more than 50 government ministers, and many of his lawmakers telling him they wanted him out of office. Read full story

The jostling to choose his successor – a process that could take weeks or even months – is underway with senior figures and some lesser-known members of parliament (MPs) expected to throw their hats in the ring.

In the meantime, Johnson, brought down by a series of scandals and a loss of trust in his integrity, remains in the job, a situation that opponents, and many in his own party, say is untenable.

“I think Conservative MPs have got to get rid of him today,” Ed Davey, leader of the Liberal Democrats told BBC TV. “It’s just ludicrous that he’s the caretaker prime minister. He’s never cared and looked after anything in his life.”

The main opposition Labour Party has also called for Johnson to go straightaway, promising to hold a confidence vote in parliament if he is not ousted immediately.

Johnson, who less than three years ago won an election with a large majority, was brought down by scandals that included breaches of COVID-19 pandemic lockdown rules, a luxury renovation of his official residence and the appointment of a minister who had been accused of sexual misconduct.

NATIONAL INTEREST
Johnson told his cabinet of top ministers – some of whom were appointed after the announcement he would be resigning – that he would not be making any big changes of direction that would tie the hands of his successor.

But in his speech to the country announcing his exit, he did not use the word ‘resign’ or ‘resignation’, and described his forced departure as “eccentric”, and such is the lingering distrust in his behaviour that former Conservative prime minister John Major said Johnson should leave now.

“To allow a prime minister whose own ministers have just resigned en masse with no confidence in his leadership to remain in place cannot be in the national interest,” the Times newspaper said in its editorial.

Meanwhile, many Conservatives are turning their attention to replacing him full-time, with no shortage of ambitious candidates.

So far just Attorney General Suella Braverman and Tom Tugendhat, chairman of parliament’s Foreign Affairs Select Committee, have officially confirmed their desire to be the next leader, but about a dozen others have been tipped to consider running for the job.

Among those who are considered to be front runners are former finance minister Rishi Sunak, foreign minister Liz Truss and defence minister Ben Wallace, although none of them have as yet declared their intention to stand.

Although the exact rules and timetable for the contest have yet to be set out, Conservative lawmakers will whittle down the hopefuls to a final two candidates. Then the party’s members – numbering fewer than 200,000 people – will decide which one will be the leader and the next prime minister.

Whoever that is will be faced with a daunting in-tray.

There is also growing industrial unrest with widespread strikes by rail workers, while others including teachers and healthcare staff also threatening walkouts.

Despite his 2019 election triumph is based on his promise to “get Brexit done”, Britain remains in a bitter standoff with the European Union over trade rules for Northern Ireland.

“Whatever the party decides to do next, it needs to do it quickly,” the Daily Telegraph newspaper said in its editorial. “The country will not understand or forgive a protracted leadership contest in the middle of an economic crisis and with a threat of a wider war in Europe ever-present.”