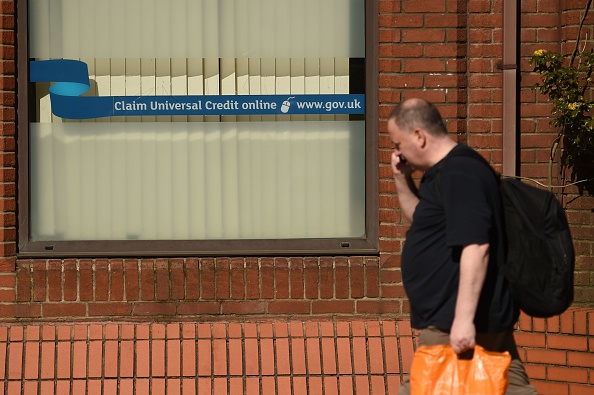 A man walks past a sign with the email address of ‘universal credit’ outside the offices of ‘jobcentreplus’ in Oldham, Lancashire. (Photo by Oli SCARFF / AFP) via Getty Images)

WITH upcoming Universal Credit cut, England is heading for the biggest cut to the basic rate of social security “since the creation of the welfare state at the end of World War II”, experts have warned, adding that workers in south-west England will be hardest hit with some half a million Britons might be pulled into poverty.

The reversal of the £20-a-week uplift in universal credit – introduced at the outset of the coronavirus lockdown last year – is estimated to cost £1,040 a year for some of Britain’s poorest families, including many in low-paid jobs, experts have claimed.

The planned cut to the incomes of around six million families will be a huge shock, said Joseph Rowntree Foundation (JRF), warning that half a million more people are set to be pulled into poverty, including 200,000 children.

Claiming the cut as “the biggest overnight cut to the basic rate of social security since the Second World War,” Katie Schmuecker, deputy director of policy for the JRF warned ministers against “ploughing ahead with a cut despite knowing it will be devastating for millions of families”.

Another analysis by Trade Union Congress (TUC) claimed that low-income Britons living in south-west England will be worst affected by the £20-a-week cut later this year.

Highlighting that more than four in 10 universal credit claimants in the south-west have a low-paid job, the trade union body said that the region from Cornwall to Gloucestershire will be badly affected.

TUC report also revealed the impacts on individual parliamentary constituencies, revealing that the prime minister Boris Johnson’s west London Uxbridge and South Ruislip seat has 38.4 per cent people on credit while UK chancellor Rishi Sunak’s Yorkshire constituency of Richmond has nearly half, 48 per cent of people receiving universal credit are in work.

Labour leaders, welfare charities and some Tory MPs have criticised the idea of Universal Credit cut, saying that millions of people will still be in precarious jobs in October and unable to cope financially after a cut in benefits of more than £1,000 a year.