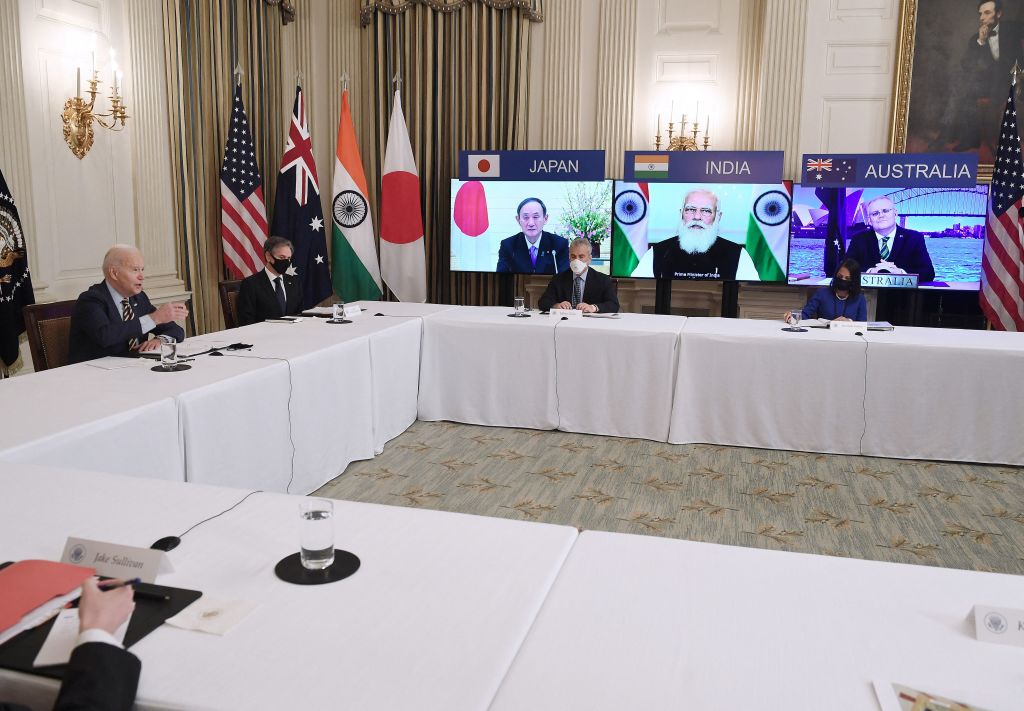 US president Joe Biden (L) virtually meets with members of the Quad forum that includes Australia, India and Japan at the White House in Washington, DC, on March 12, 2021 (Photo by OLIVIER DOULIERY/AFP via Getty Images)

US PRESIDENT Joe Biden on Friday (24) would look to deepen his bid to strengthen the American leadership of the Indo-Pacific against a rising China by hosting the maiden in-person summit of the regional Quad summit.

Biden will be joined by the prime ministers of India, Japan and Australia for the summit at the White House where they are set to discuss a Covid-19 vaccine drives, regional infrastructure, climate change and securing supply chains for semi-conductors.

While China is officially not on the agenda of the summit, the Quad is likely to stress on a “free and open Indo-Pacific”, a senior US official told the media. The phrase is often used to mean that no effort will be spared to ensure that Beijing doesn’t end up dominating the region, including its key international sea lanes.

For the Biden administration, the Quad summit marks an important step to reviving a focus on diplomatic efforts, particularly after its controversial exit from Afghanistan, a move which has been slammed at various quarters.

And “the Biden administration understands that the challenges of the 21st century will largely play out in the Indo-Pacific,” a senior administration official said on the condition of anonymity.

“We are doubling down on our efforts,” he added.

Washington is leading three regional groupings that aim to check China’s ascent and of them, the Quad is deliberately the most open, AFP reported.

The other two are the Five Eyes intelligence-sharing alliance which comprises Australia, Canada, New Zealand and the UK besides the US and the recently launched AUKUS, which features Australia, the UK and the US.

The Quad summit of Friday is expected to be one of the final international summits for Suga, who has decided against seeking re-election. Suga and Modi will also hold separate bilateral talks with Biden. Morrison has already met Biden at the United Nations earlier this week.

The US is also careful that the Quad is not seen as a military move, especially after the ruckus over the Australian nuclear submarines plan that left France fuming. It also doesn’t want Quad to rival the pre-eminent regional grouping in South East Asia called ASEAN (Association of South East Asian Nations).

“This is not a military alliance. It’s an informal grouping of democratic states,” the US official said. “I think concerns have been dispelled and I believe at a general level this initiative is welcome across the region,” he added, according to AFP.