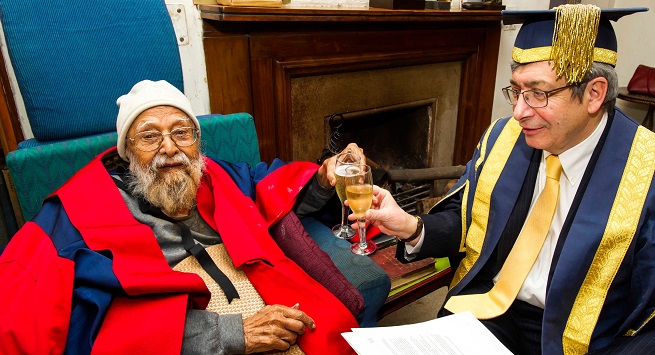 THE Khushwant Singh Literary Festival (London) is to be held digitally for the first time, next Saturday and Sunday (26-27), and will feature Kabir Bedi talking about his recent autobiography, Stories I Must Tell: The Emotional Life of an Actor.

It will also feature Dr Jane Goodall, the English primatologist and anthropologist who is considered to be the world’s fore­most expert on chimpanzees. She is best known for her 60-year study of social and family interactions of wild chimpanzees since she first went to Gombe Stream National Park in Tanzania in 1960, where she witnessed human-like behaviour among chimpanzees.

In another session, the author William Dalrymple will interview the internation­ally acclaimed art expert, Vidya Dehejia, the Barbara Stoler Miller Professor of In­dian and South Asian Art at Columbia University. She was awarded the Padma Bhushan by former president Pratibha Patil in 2012. Her just published new book is The Thief Who Stole My Heart: The Material Life of Sacred Bronzes from Chola India, 855-1280.

Victoria Schofield, an Oxford contem­porary of Pakistan’s late prime minister, Benazir Bhutto, is another participant. In October last year she published a memoir of her friend, The Fragrance of Tears, my friendship with Benazir Bhutto.

This is seen as a fitting tribute to Khushwant Singh, who sought friendly relations between India and Pakistan. His son, Rahul, started the Khushwant Singh Literary Festival six years after his father’s death, aged 98, in 2014. The festival is normally held in Kasauli, a small canton­ment town in the Himalayas, but in 2018, it came to London for the first time.

“My father was something of an Anglo­phile and loved English writers and poet­ry,” Rahul, himself a journalist, told Eastern Eye, which is a media partner this year. “He regarded England as his second home.”

Rahul, who runs the festival with his partner, Niloufer Bilimoria, said the theme this year is, “No Man is an Island”.

He said: “A huge fallout of the pan­demic is the realisation of the way we have taken our environment for granted. We are completely interdependent on each other in this respect. As in so many other respects, too. India is a vaccine sup­plier to the world. And in turn, India has received aid from the world.”

He added: “The ongoing pandemic re­minded us of the bonds that link all of us — links of compassion and humanity, no matter which religion or community you belong to. Indeed, the pandemic has united us all, erasing divisive ideologies and removing age-old prejudices. Let’s hope that as we overcome this terrible scourge the realisation will come that no man is an island.

“With the pandemic we bring to the forefront the idea of cooperation between nations, communities and individuals. A great reset in the old world order. And the importance of diversity.

Quoting Alvin Toffler – “For life goes not backward nor tarries with yesterday” – he went on: “Most important of all, these lessons must be taken across cul­tures and nations. KSLF believes in and encourages diversity.”

He said the festival in London “will talk of peace and ties between India and Paki­stan… for progress is only possible in times of peace. We will learn too from other suc­cessful partnerships in the arts and in his­tory. Our identity as modern Indians is impossibly syncretic – marked by ancient and relentless religious, social and trans-cultural intermingling – however much some of us like to uphold deluded notions of supremacy. We look forward to an in­spiring event that comes from a diversity of cultures. For No Man is an Island.”

Khushwant left behind a rich literary legacy of both fiction and non-fiction. His best known novel, on the consequences of partition, is Train to Pakistan, which was turned into a film. In non-fiction, he is highly respected for his scholarly two volume A History of the Sikhs.

The author and journalist, who was born in Hadali in what is now Pakistan and retained an abiding love for Lahore, pushed for better Indo-Pakistan relations throughout his life. After his death, some of his ashes were taken to Pakistan by his son.

Khushwant’s distinctive hu­mour is summed up in the epi­taph he prepared for himself: “Here lies one who spared nei­ther man nor God;/ Waste not your tears on him, he was a sod;/ Writing nasty things he re­garded as great fun;/Thank the Lord he is dead, this son of a gun.”