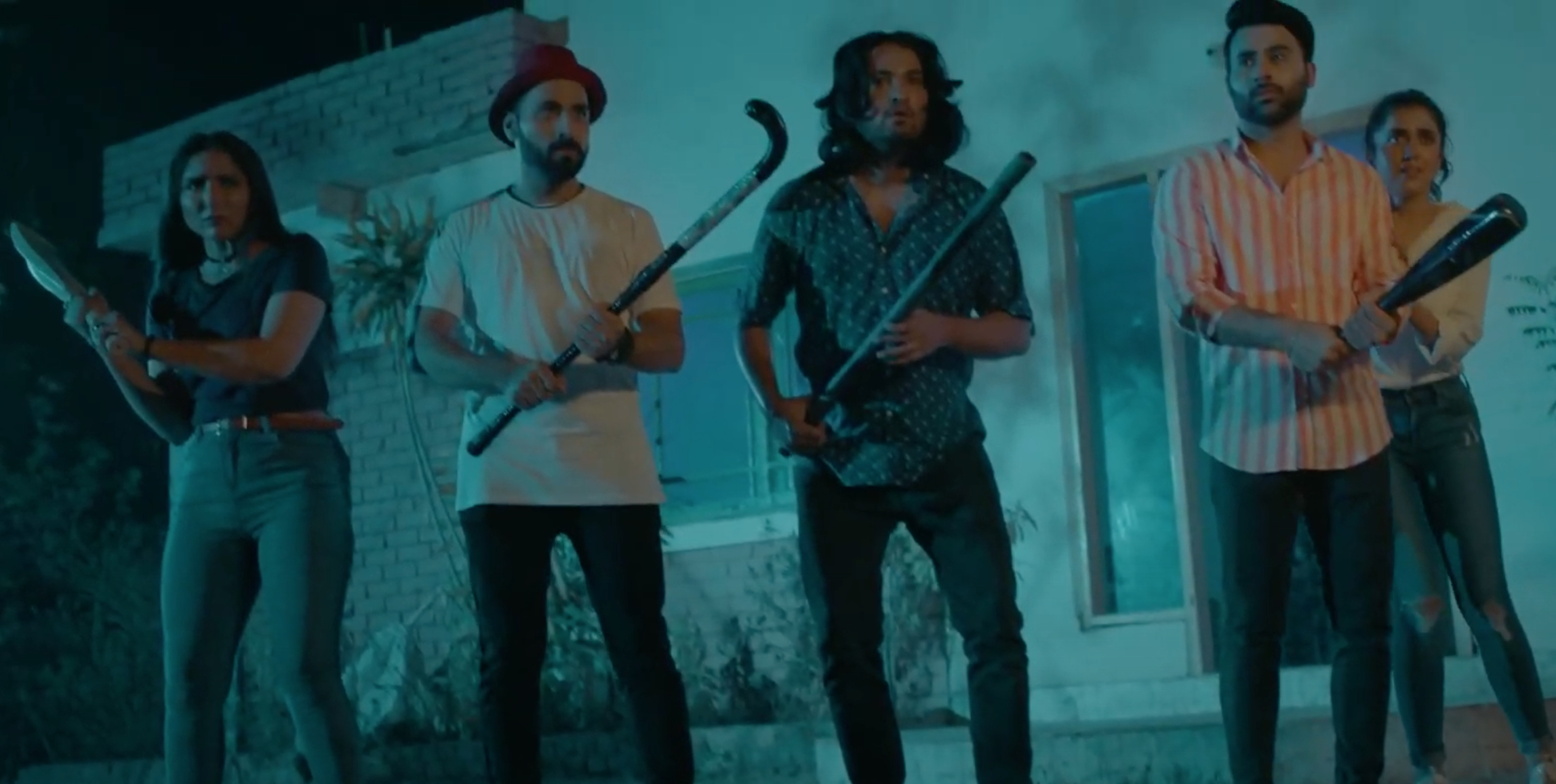 A scene from Udham Patakh

Popular stars Faizan Sheikh and Hira Umer play the lead roles in perhaps the most path-breaking Pakistani film that will be released this year. Both seem to have clearly enjoyed the experience of starring in Udham Patakh and were happy to discuss the unique project with Eastern Eye.

They also reflected on their respective acting journeys along with revealing their future hopes, favourite zombie movies and working in lockdown.

How do you look back on your journey as an actor?
Faizan: It has been a very interesting journey. I have grown as an actor and as a person over the years with all the characters I have played on-screen, and stage. I make sure that all the characters I do have something in common with my real self, which helps me relate to them and it makes the whole process interesting and challenging.
Hira: My journey has been good so far. I try to learn something new in every new project. This acting journey has no end and it is a continuous process of learning and improvement.

How did you feel when you were offered Udham Patakh?
Faizan: It excited me because this is not a known genre in our country. It was risky yet I chose to do it. Indie filmmakers seek help from mainstream actors with such passion projects and I love to help anyone who has a good story to tell.

Tell us about the film?
Faizan: It’s a rollercoaster ride, full of ups and downs. It has everything a family entertainer should have. I am sure viewers will come out talking about the fun they had in cinema.

Tell us about the character you play in Udham Patakh?
Hira: The character I play is of a young girl who is hosting a reality show for a local news channel. She is the lead character of the movie, which is quite interesting I feel.
Faizan: I play Ashfaq, who’s doing a part-time job at a farmhouse to earn some quick bucks. He falls in love with this girl who’s a TV show host. He is simple, funny, brave and ready to save the girl at any cost.

How did you prepare to take on such a unique project?
Hira: I first read the script very carefully to check if it appeals to me. When I read the script of Udham Patakh, I liked its distinctive concept and decided to sign this project.

Do you think Pakistani audiences are ready for a movie like this?
Hira: Horror comedy has not been experimented in Pakistan before, so Udham Patakh is the first film of this kind. I don’t think people were expecting such a unique movie in Pakistani cinema, so it is definitely a breath of fresh air for audiences.

What is your favourite moment in Udham Patakh?
Faizan: The fight with zombies. It really tested us on set. We choreographed the whole sequence and performed it over and over again for different camera angles. It was hot, humid and very dusty. The whole sequence was shot in two full nights. It took a lot of energy and time, but it was worth it.

Hira: Some zombies in the movie are very frightening and creepy. (Laughs) I was actually scared of them. I was trying to hide from them and was also afraid of the fake blood. Now when I think back, I laugh at how cowardly I behaved. But those scary moments during the shoot were fun.

Faizan: The make-up team has outdone themselves. The guy with extra huge jaw and teeth outside was my favourite and the scariest.

Would you tell us which is your favourite zombie movie?
Hira: Yes, World War Z and Army of the Dead are my favourites. The Walking Dead TV show is good as well.

How does horror comedy compare to other genres?
Faizan: It would be unfair to compare this genre with seasoned genres. This genre doesn’t have a set formula or narrative, which makes it unique, interesting, and risky. I hope audiences will accept this and enjoy the effort too.

Are you surprised a film like this hasn’t been made in Pakistan before?
Hira: Yes, the fact that no work has been done on the zombie genre before in Pakistan is surprising. Horror comedy movies are fun to watch. Udham Patakh will set a benchmark for other filmmakers in Pakistan who may want to venture into this genre.

What has it been like working during lockdown?
Hira: Working during lockdown has been difficult when you have to strictly follow safety procedures to protect yourself and others around you. We, artists, must take off the mask to face the camera – it is part of our work, but we are more exposed to the virus I feel. I still tried to be as careful as I could be because nothing is more important than your health.

What can we expect next from you?
Faizan: I am working on a very interesting web project, which is for another country and platform. I can only disclose so much about it at the moment.
Hira: After my big-screen debut, you will also see me on TV and web series. I am currently working on some projects, which are near to completion and will be aired soon.

Do you have a dream role?
Faizan: Absolutely! A long list. Joker is one I can mention right now.

Why should we all watch your movie Udham Patakh?
Hira: Udham Patakh is a perfect blend of humour and horror with a pinch of political satire. Its content is fresh and engaging, so it is the perfect pack of entertainment for everyone.