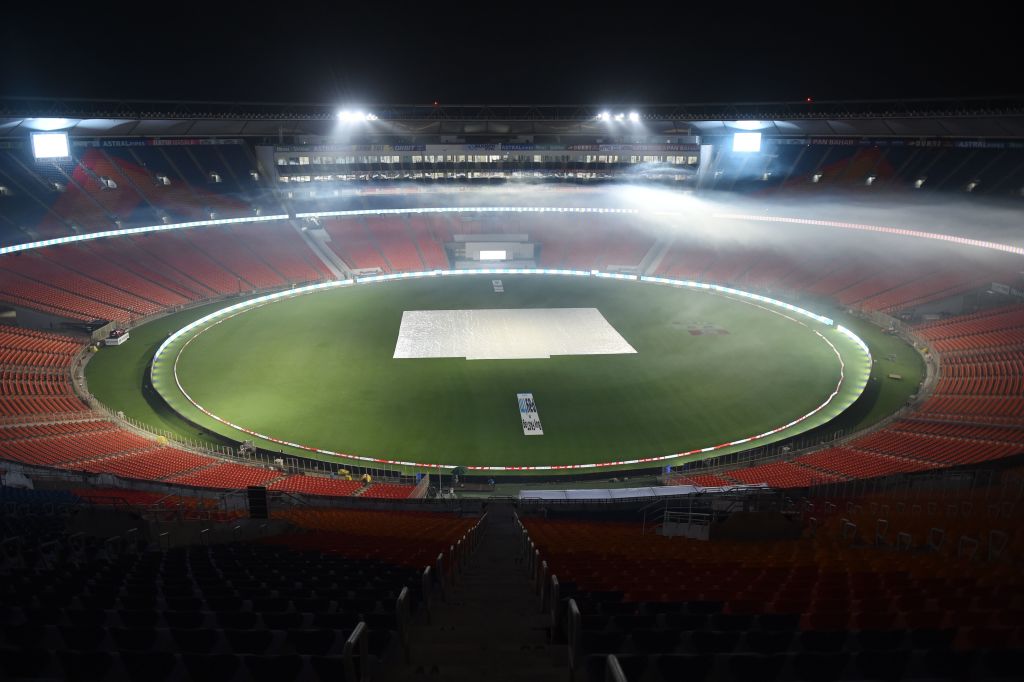 This photograph taken on February 23, 2021 shows fogging underway as a precautionary measure at the Sardar Patel Stadium, the world’s biggest cricket stadium, on the eve of the third Test match between India and England, in Motera, on the outskirts of Ahmedabad. (Photo by SAM PANTHAKY/AFP via Getty Images)
Follow Us

THE world’s biggest cricket stadium was renamed after India’s prime minister Narendra Modi in a surprise move on Wednesday(24) hours before its inaugural international match between India and England.

The ground was renamed Narendra Modi Stadium from the earlier Sardar Patel Stadium just before the start to honour the Indian prime minister who initiated the idea to reconstruct the old venue.

President Ramnath Kovind and home minister Amit Shah, who was former chief of the state cricket association in Gujarat, performed a Hindu blessing to inaugurate the venue.

But it was the fans who made the occasion special as they stood up to sing the national anthem and then cheered the home players after England elected to bat first.

Like other sports, live cricket has been played largely to empty stadiums in recent months although crowds have started tentatively to return including when Australia hosted India in December.

The biggest crowd since the pandemic for any major sporting event was the State of Origin rugby league finale between Queensland and New South Wales in front of 49,000 fans in Brisbane in November. A month earlier 46,000 people saw hosts New Zealand beat Australia at rugby union in Dunedin.

In cricket-mad India, the first Test of the current series against England in early February was behind closed doors in Chennai but for the second game a limited crowd of 15,000 was allowed — a game the hosts duly won to tie the four-Test series 1-1.

“I am absolutely loving it. The stadium looks so impressive and lucky to be the first to sit on these new seats,” Shrey Patel, a 26-year-old student seated at the pavilion end, told AFP.

The perfectly round venue promises unobstructed views from every angle and has facilities including four dressing rooms and a club house equipped with an Olympic-sized swimming pool.