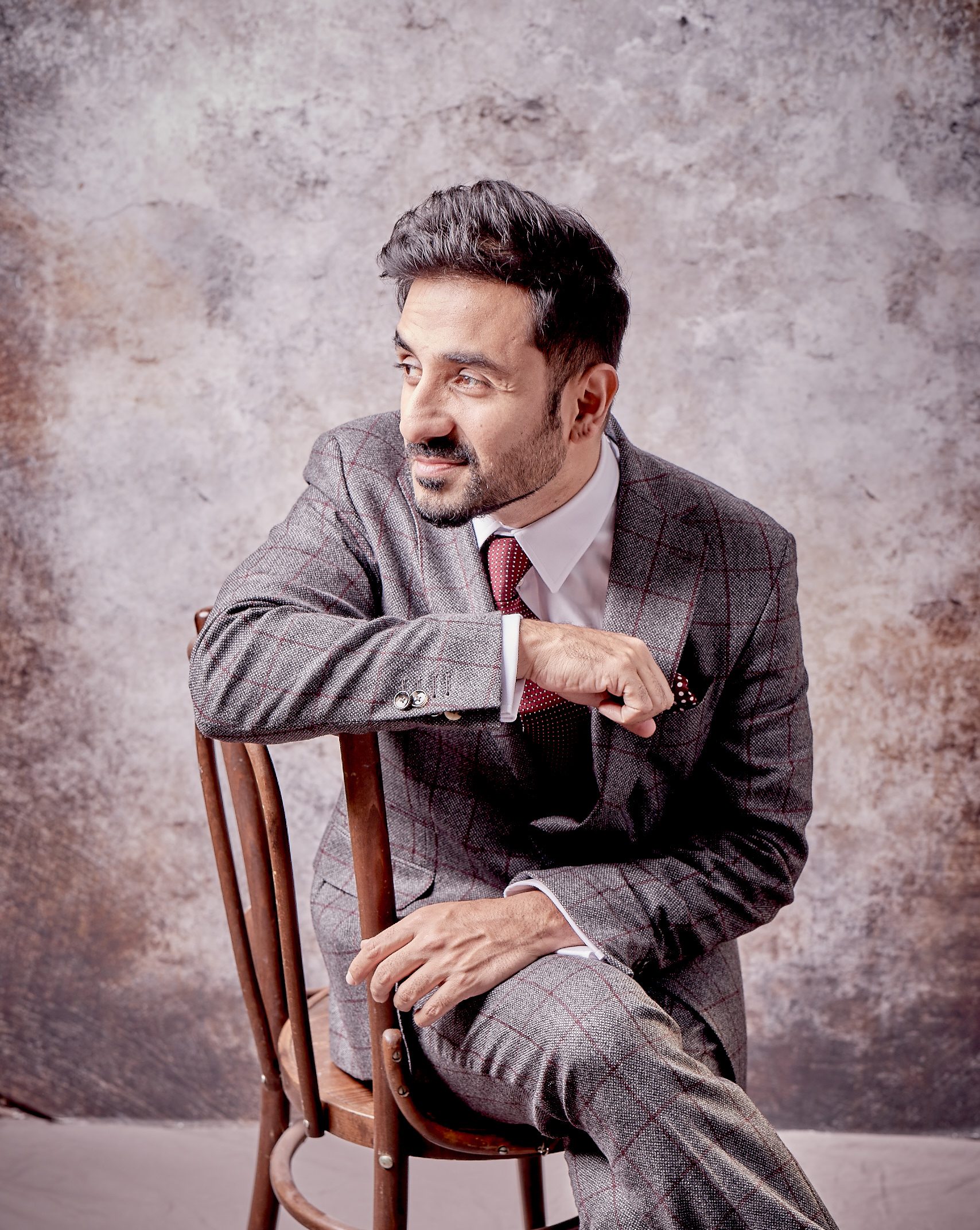 Unstoppable Indian star Vir Das has been blazing a trail of comedy fire across the globe with red-hot stand-up shows powered by joked-fuelled bombs and explosive observations.
By combining humour with a surgical-like dissection of life, love, relatable situations, politics and pretty much everything else, he has become one of the most interesting voices on the international stage. He returns to the UK next month with his brand-new show Wanted, which has a month-long run at this year’s Edinburgh Fringe Festival followed by a tour of England. It continues a massively successful journey of sold-out shows around the world and Netflix specials.

Eastern Eye caught up with the constantly travelling star to discuss Wanted, comedy, the secret to a successful show, stand-up heroes, high expectations, hotly anticipated UK tour, and why he loves being busy.

Have you been too busy to enjoy the success?
I mean ‘the busy’ is the enjoyment, right, at the end of the day? Like what I always tell my wife or people I work with is, that I’ve worked very very hard to be this exhausted. That is the best way I can put it. I think for the larger part of your career you’re just kind of sitting at home hoping people will listen to your ideas and views. Then suddenly when they do and come in droves, you owe it to yourself to kind of make up for lost time with them.

Do you now feel the pressure because with every Netflix special and tour the expectations get higher?
Not so much! I kind of remind myself that most people who I idolise in stand-up like George Carlin, Richard Pryor, or a Chris Rock, got really really good when they hit their 25-year mark. And I’m about 14 or 15 years in, so still very much a baby compared to some of the greats. So, I allow myself the freedom that I will not be the comedian next year I am this year, and that I’m constantly changing. I kind of see a mountain in front of me, still yet to climb.

What inspired your latest show Wanted?
The latest show is about freedom, being challenged, and as a comedian wondering what’s funny to him anymore. So, it’s very much about questions of identity and kind of being the global Indian. They are questions of being a nomad and not knowing where my feet lie. It’s also a question of what does one have the freedom to say? So, I think it’s the kind of show that will make you laugh. It’s definitely relatable and talks about broad world themes. But I’m going to tell you six stories in it and will definitely challenge you. So, if you’re not ready to be challenged, I don’t think this is the show for you.

What inspired the title Wanted?
Last year I got into a little bit of trouble at home (India) and in the world. So, I’m just like, you know ‘wanted’ at home, in my household, and everywhere else. Sometimes in a good way and sometimes in a not very good way. So that’s what led to the show.

Getting in trouble, as you say, has not stopped you. Are you fearless?
No, I’m definitely full of fear. I think any healthy artist is full of fear and that’s what leads to evolution. I have no false bravado whatsoever. I think a healthy cocktail of anxiety, fear, and days of confidence, drive my writing. So no, I’m not fearless.

Are you able to tell if a joke will be funny when writing it or do you not know until you get on stage?
I don’t know until I get on stage and then it changes every single night. Some nights it’s funny and sometimes it’s not. Sometimes it depends on what room you’re in and what kind of day they’ve had. You really have to do a joke like 100 times until you really have it down in such a way that it’s reliable in every type of room.

Is there any joke in the latest show that you’re feeling confident about?
I have a new bit on just kind of, how freedom comes with sacrifice. How we all forgot that you have to make little sacrifices for freedom, and I think it’s a joke that is about every country in the world without specifically being about every country in the world. So, that I’m excited about. I think it might be one of the most global things ever written.

How much are you looking forward to a full run at this year’s Edinburgh Fringe and going up against hundreds of other shows at the festival?
I love it! It’s like Disneyland for artists. I’m there as much as a performer as much as I am as an audience member. It definitely allows you to get your show right. I’ve never done the full Fringe before. I used to always kind of do 11 nights. But now I’m doing the 25 nights. Also, you have to realise, me being from Mumbai, producing and acting in things and then touring, to be in the same place for a month never happens to me. Like that hasn’t happened in a really long time – to just be in one country for a month. So, I’m treating it almost like a vacation, where I just have to work for an hour a day.

Your comedy cleverly combines laughter-filled jokes with making the audience think. Is that a conscious decision when you are writing a show?
Not so much. I am always just trying to make you laugh and that’s the beginning of the joke. I think perhaps as you get older, just a little bit of who you are falls onto the page a lot easier because you access yourself and know yourself a little bit more. So, I think that’s just what happens sometimes – how you feel about the world finds its way into your comedy. But I’m not actively trying to do that. I’m just kind of doing me.

Do you ever get nervous before going on stage?
Yes, I get nauseous before every show. I think that if you are not seconds away fr­om throwing up before you go on st­age, you are not evolving as an artist.

Can you still muster up the funniness if you are having a bad day?
I’ve been doing it for long enough where I can perform under any circumstance, for sure. You know I remind myself that it’s a privilege to do it and if you just kind of lean into it, the audience will cure your anxiety. Some 2,000 people sending you laughter is pretty therapeutic as well.

Why aren’t there more Indian comedians like you on the global stage. You’re almost like the lone gun internationally?
I don’t know! I think there are many people who are like me. I just kind of have maybe two-three years on them, in terms of starting a little bit earlier than them. But I think it’s only going to get better and you’re going to see more faces.

Are you still balancing stand-up comedy with acting?
Yes, but it has been a bit off balance because I used to tour six to seven months a year and then shoot stuff six months a year. Then during the pandemic, I just shot like four things back-to-back and acted for two years. Now I’m just doing stand-up through the year, so in that sense it’s a little bit off balance. But, hopefully, next year I’ll get back to the half and half.

What inspires you?
I think about the fact that the world has never had more common ground and in that sense it’s the best time to be a comedian or artist.

You’ve toured globally. Is there a city or venue you love most?
I mean Edinburgh’s up there. I would say Edinburgh and Cape Town. I was recently in Shillong, in the Northeast of India, and loved that. That was ins­a­nely comforting. The Comedy Cellar in New York City is my home club, wh­­enever I’m in America. So those are my four happy places to do stand-up.

Who do you find funny in your everyday life?
I won’t say their name, but I think they do the news (in India). I find news anchors funny these days and they are the new comics.

Are you under pressure to be funny in your own life?
No, not at all. I think people who know me, know me well. They know that I’m not funny in real life and most comics aren’t.

You mentioned about your comic heroes, but is there anyone who stands out for you?
I think George Carlin for just not giving a f**k and saying it anyway. Eddie Izzard for making you feel like it was all made up on the spot, when, in fact, it’s beautifully written and Richard Pryor for vulnerability in comedy. Those are my three.

Finally, why should we come and watch your new show Wanted?
You should all come and watch my show because I am going to make you laugh. I am going to take you to at least 10 different countries during the show. You will hear
stories from 10 different countries. If you are thinking about this world that we live in and what we all have in common, then I will point out to you if you have ever wondered whether the concept of freedom is evolving. We’re going to talk about that and then I am just going to tell you some really cool stories.