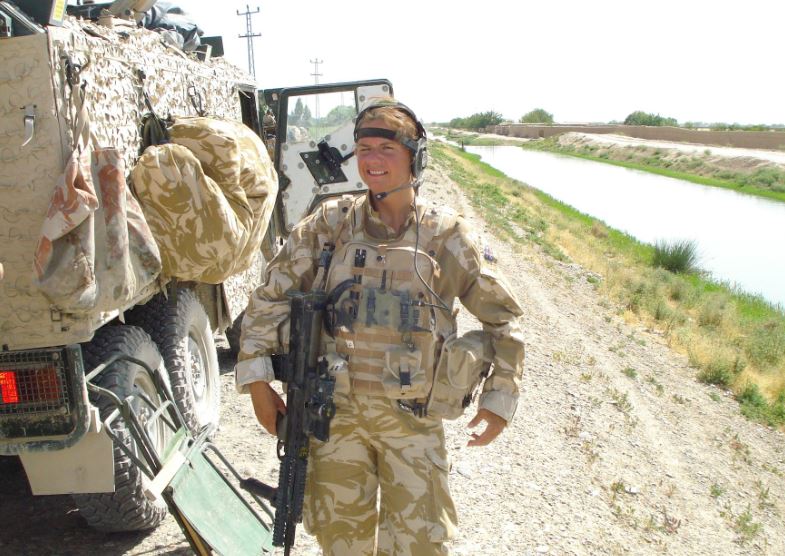 Produced in partnership with UK Government

AS THE UK united in its efforts to tackle the pandemic and provide relief to all those who were af­fected, military veterans have played a key role on the frontline – from building Nightingale hos­pitals to delivering food for those who are shielding. Former members of the Army, Royal Navy and RAF (Royal Air Force) used the skills they acquired while in service to help the UK tackle Covid-19 pandemic in recent months.

One of them is Michelle Par­tington, who worked as a housing support officer and also helped with food deliveries for key work­ers. “I began working as a housing support officer for the Salvation Army and the YMCA, many of whose staff were furloughed or self-isolating. A pub in St Helens kindly put me up and when I wasn’t on my housing services shift, I was doing food deliveries for them to key workers. It was hard, but it was a nice experience,” she said.

Partington also led a team of veterans looking after the home­less at a hotel. “These people weren’t as com­pliant. Some had substance abuse problems, which adds an element of danger. So I was there as mus­cle. That’s how I joked about it with the other veterans. There was some navy and some army, and you had the typical banter be­tween servicepeople. The YMCA, in particular, said that they felt re­ally safe knowing they had the support from us.”

Partington said armed forces veterans are the right people to call on in a crisis because they’re used to it.
“When we deploy, we just think, right, let’s get our heads in it,” she said. “We’ve had the training, we’ve got the leadership, we know how to cope within ourselves and to look out for each other. We are each other’s strength and that comradeship never leaves you.”

She joined the RAF when she was 19 and became the first fe­male medic ever to serve on the frontline, while serving on three tours in Afghanistan between 2009 and 2012. “I was on foot patrols for three or four days at a time, sleeping out in the open, visiting compounds, doing vehicle checks, on stag at night,” she said.

In 2011 and 2012, Partington who was with MERT – the medical emergency response team – flew countless helicopter sorties to rush critically injured soldiers and civilians to hospital. “Halfway through the tour, things went horribly wrong,” she recalled. “As a paramedic you go off the back of the helicopter to retrieve the casualties and there were a couple of combat situa­tions where we were on our bellies under fire. Halfway through that our I realised I didn’t care if I sur­vived. When I got back I would get really angry, then be in tears, so I got sent to the doctors and I was diagnosed with PTSD. They medically discharged me in Sep­tember 2015.”

Later, Partington tried working as a civilian paramedic but found her combat experiences were in­compatible with her new role. “When you’ve seen kids with their legs blown off and you’ve got somebody in front of you who’s phoned for an ambulance be­cause they’ve dislocated their fin­ger… I told them what I thought! Which was not good.”
It led her to set up her own company, Mentis Training & Con­sultancy, using leadership and communication skills she learned in the RAF to help people suffer­ing from mental health issues.

“We provide training and one-to-one mediation for people who want to stay in work who are struggling, or those who are off sick but want to come back,” Par­tington said. “I’ll never be a mil­lionaire because I tend to give most courses away for free.” She signed up with RE:ACT, a network of veterans who volun­teer as crisis responders and are usually sent to disaster zones. This year, they helped with the pan­demic efforts.
“They’ve had servicepeople giving coronavirus tests in care homes, helping to build the Night­ingale Hospitals, packing and de­livering PPE and working in the mortuaries when the influx of bodies became too great,” Parting­ton said.

Richard Sharp, CEO of RE:ACT, said, “When we launched our re­sponse to Covid-19 over 80 days ago, we put the call out for veter­ans to volunteer with RE:ACT be­cause we knew they represented a highly-trained, agile, resilient and untapped resource that were ready to serve and do whatever they could. Veterans like Michelle epitomise the humility and self­less commitment of our volun­teers and they have enabled our small charity to proudly play a major part in the UK’s efforts to defeat Covid-19.”

Partington said, “It’s been a dif­ficult year but when it hits the fan, you realise how much you can do, both on your own and together as a group. And I think now, as we go back to work, there’ll be that new way of working. You’ll find that, actually, anything is possible.”

“Those who have served in the armed forces have devel­oped a vast array of skills during their career, meaning they can play a huge part now in our national effort to tackle coronavirus. We have seen many veterans making a fantastic contribution during the pandemic, through helping out the vulnerable in their local communities, to running mobile testing sites national­ly. We cannot thank them enough for their efforts.”
– Johnny Mercer, Minister for Defence People and Veterans