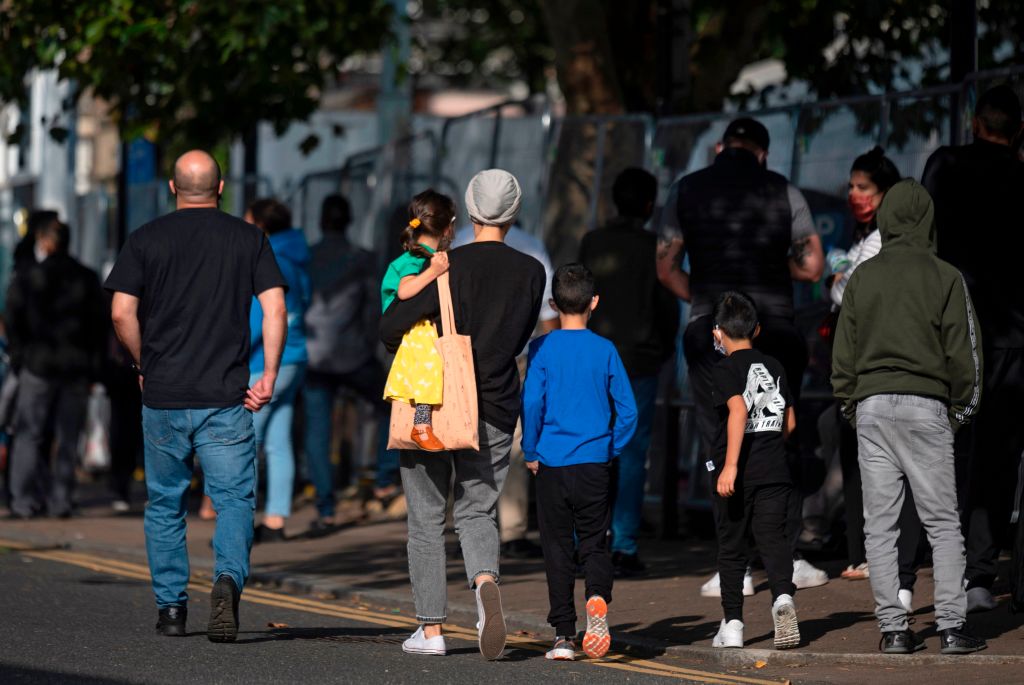 A family with young children walk past the queue to outside a coronavirus testing centre in Edmonton in north London. (Photo: JUSTIN TALLIS/AFP via Getty Images)

THE UK crossed 500,000 confirmed coronavirus infections on Sunday (4), official figures showed, in the latest grim milestone for the European country worst-hit by the pandemic.

Health authorities blamed a technical glitch for a sudden spike in cases announced in evening figures that had kept several thousand cases from the last week of September off the official tally.

In an interview with the BBC on Sunday, Prime Minister Boris Johnson said the country faced a “very tough winter” in the battle against the disease, but said there was “hope” the situation could improve by Christmas.

Chancellor Rishi Sunak warned that a further lockdown would cripple both the economy and society, in an interview with The Sun, stating that lockdowns have a very strong economic and social impact.

“Having a difficult economy has an impact on both our ability to fund public services like the NHS but also on individual people’s long-term health outcomes,” he said.

Sunak spoke about his dissatisfaction with the curfew on pubs and restaurants saying: “Of course, it’s frustrating. I know it’s difficult and wish we didn’t have to do these things.”

“The fact that he can do it and maintain that sense of optimism is extraordinary,” Sunak added.

The chancellor’s statements coincided with the launch of a new government employment programme that aimed at helping those left jobless due to the pandemic to get back into work.

The Department for Work and Pensions said the Job Entry Targeted Support (JETS) scheme would be backed by a £238-million investment.

The ministry said jobseekers put forward for the scheme would have access to tailored, flexible support to quickly get back into employment. This could involve specialist advice on how people could move into growing sectors, as well as coaching on CVs and interviews.

“JETS will give recently unemployed people the helping hand they need to get back into work, boosting the prospects of more than a quarter of a million people across Britain,” said Secretary of State for Work and Pensions Therese Coffey.

“There’s going to be no vaccination of people under 18,” vaccine taskforce chairwoman Kate Bingham told the Financial Times.

“It’s an adult-only vaccine, for people over 50, focusing on health workers and care home workers and the vulnerable.”

She stressed that talk over vaccinating “the whole population” was “misguided”, adding that vaccinating healthy people, who were much less likely to have severe outcomes from Covid-19, “could cause them some freak harm”.

Bingham said the government was aiming to vaccinate about 30 million people, compared with the UK population of about 67 million, if a successful vaccine against Covid-19 was found

The British government has already ordered tens of millions of vaccine doses from various pharmaceutical research programmes, including the one led by the University of Oxford and AstraZeneca.

Nine candidates for a vaccine are currently in the final stages of clinical trials, but there is so far no indication of when a vaccine will be ready for mass rollout.