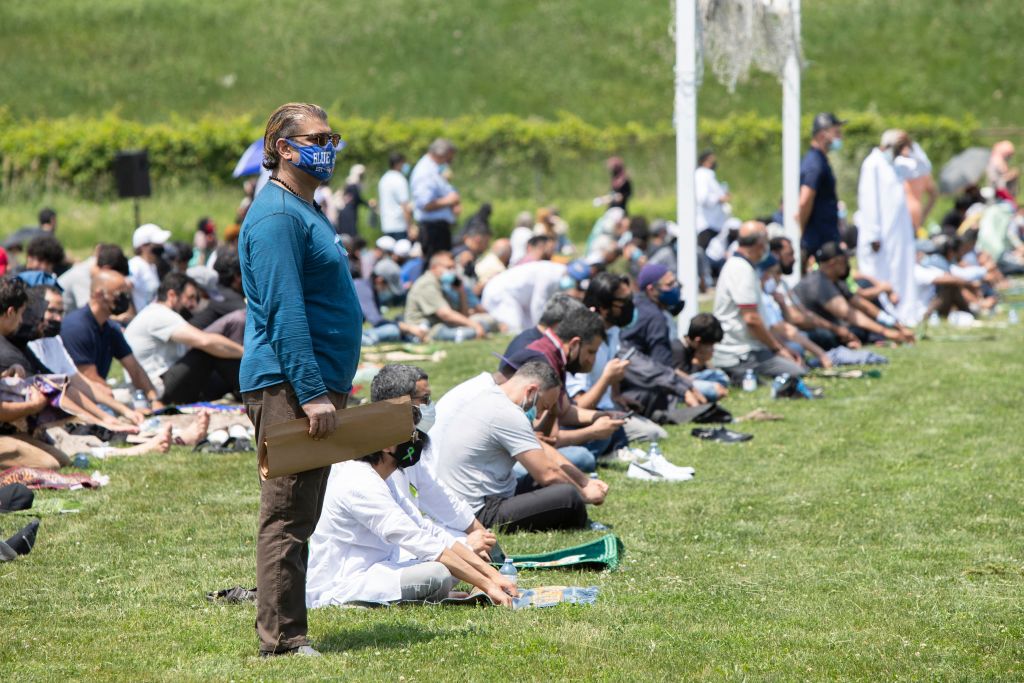 People gather at the Islamic Centre of Southwest Ontario on June 12, 2021, to pay their respects at the funeral of four members of the Afzaal Family, in London, Ontario, Canada. Four members of the Afzaal family were out for a walk in their London neighbourhood June 6 when a 20-year-old man in a black pickup truck drove into them. (Photo by NICOLE OSBORNE/AFP via Getty Images)

A GROUP of more than two dozen US lawmakers have written to secretary of state Antony Blinken, urging him to appoint a special envoy to combat the alleged rise in attacks against the Muslim community in different parts of the world, including China, India and Myanmar.

Terming Islamophobia a “global problem”, the lawmakers, in their letter written on Wednesday (21), called for a comprehensive strategy for establishing US leadership in combating it worldwide.

They also suggested that state-sponsored Islamophobic violence and impunity for such acts be included in next year’s annual human rights reports.

The letter comes after the new findings of the Council on American Islamic Relations (CAIR) showed that anti-Muslim hate was on the rise. They included over 500 documented complaints in 2021 alone.

These included a sudden rise in anti-mosque incidents in May and June involving cases of vandalism and an attempted stabbing, and several physical assaults targeting Muslim women wearing the hijab (religious head covering).

“As part of our commitment to international religious freedom and human rights, we must recognise Islamophobia as a pattern that is repeating in nearly every corner of the globe,” the lawmakers said in their letter.

“It is past time for the United States to stand firmly in favour of religious freedom for all, and to give the global problem of Islamophobia the attention and prioritisation it deserves,” they said.

The lawmakers said, “From the ongoing atrocity crimes being committed against Uyghurs in China and the Rohingya in Burma (Myanmar), to the significant restrictions on Muslim populations in India and Sri Lanka, to the stoking of Islamophobia by political actors that is leading to violence in North America and Europe, to the severe human rights violations against certain sects of Muslims in Pakistan and Bahrain, this is a genuinely global problem that the United States should tackle globally.”

“For this reason, we are writing to strongly urge you to appoint a special envoy for monitoring and combatting Islamophobia, and to specifically include anti-Muslim violence per se in next year’s annual human rights reports,” they said.

Separately, Congresswoman Ilahi Omar, who is among the lawmakers who wrote to Blinken, said, “Anti-Muslim hate is on the rise both here at home and around the world.”

“This year has seen over 500 incidents of hate in the US and those are just the ones that have been reported,” she said.

“Last month, we witnessed a deadly attack wipe out three generations of a Muslim family in Canada. In countries around the world, from China to India to Myanmar, Muslim communities are being discriminated against. We must all stand united against this horrific rise in hate,” she said.