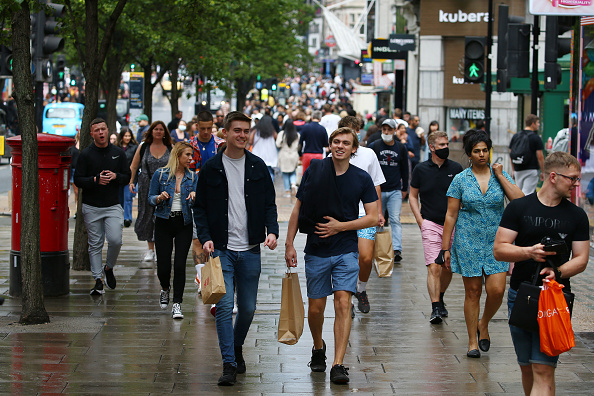 BRITAIN’S economy grew more slowly than previously thought in the July-September period, before the Omicron variant of the coronavirus posed a further threat to the recovery later in the year, official data showed on Wednesday (22).

Gross domestic product in the world’s fifth-biggest economy increased by 1.1 per cent in the third quarter, weaker than a preliminary estimate of growth of 1.3 per cent as global supply chain problems weighed on manufacturers and building firms.

That was slower than the economy’s 5.4 per cent bounce-back in the second quarter when many coronavirus restrictions were lifted, the Office for National Statistics said.

Investors are braced for a further slowdown in the fourth quarter of 2021 and a weak start to 2022 due to a rise in Covid cases caused by Omicron which has hurt Britain’s hospitality and leisure sector and hit retailers.

Prime minister Boris Johnson has ruled out new Covid restrictions in England before Christmas but said he might have to act afterwards. Scotland and Wales have tightened controls.

“Although the economy has got better at coping with restrictions with each new wave, the possibility of tighter restrictions in January is further darkening the outlook for GDP,” Bethany Beckett, an economist with consultancy Capital Economics, said.

The ONS said households dipped into their lockdown savings to finance their spending. The savings ratio fell to 8.6 per cent of disposable income, down from almost 11 per cent in the second quarter.

Weakness in the health sector, where test and trace work and vaccinations tailed off, and among hairdressers were partly behind the cut to the third-quarter growth estimate.

A fall in energy output, after a surge in demand during a cold spring in the second quarter, also weighed.

“However, stronger data for 2020 means the economy was closer to pre-pandemic levels in the third quarter,” ONS Director of Economic Statistics Darren Morgan said.

The slump in Britain’s economy last year was now estimated at 9.4 per cent, revised from a 9.7 per cent crash, and the ONS believed GDP in September was 1.5 per cent below where it was at the end of 2019, revised up from the previous estimate of 2.1 per cent.

However, Britain’s progress towards regaining its pre-pandemic economic size, in inflation-adjusted terms, remained behind that of most other big rich economies such as France, Germany and the United States, the ONS said.

Business investment fell by 2.5 per cent in the third quarter from the previous three months and was nearly 12 per cent below its pre-pandemic level.

The Bank of England is hoping for a revival of business investment to help improve Britain’s longer-term growth prospects.

Economists polled by Reuters had expected a smaller deficit of 15.6 billion pounds.

As a share of GDP, the shortfall almost doubled to 4.2 per cent from 2.3 per cent in the second quarter.