The appointment of the envoy came at a time when the Ugandan-Asian diaspora is celebrating the 50th anniversary of their expulsions by former dictator Idi Amin. 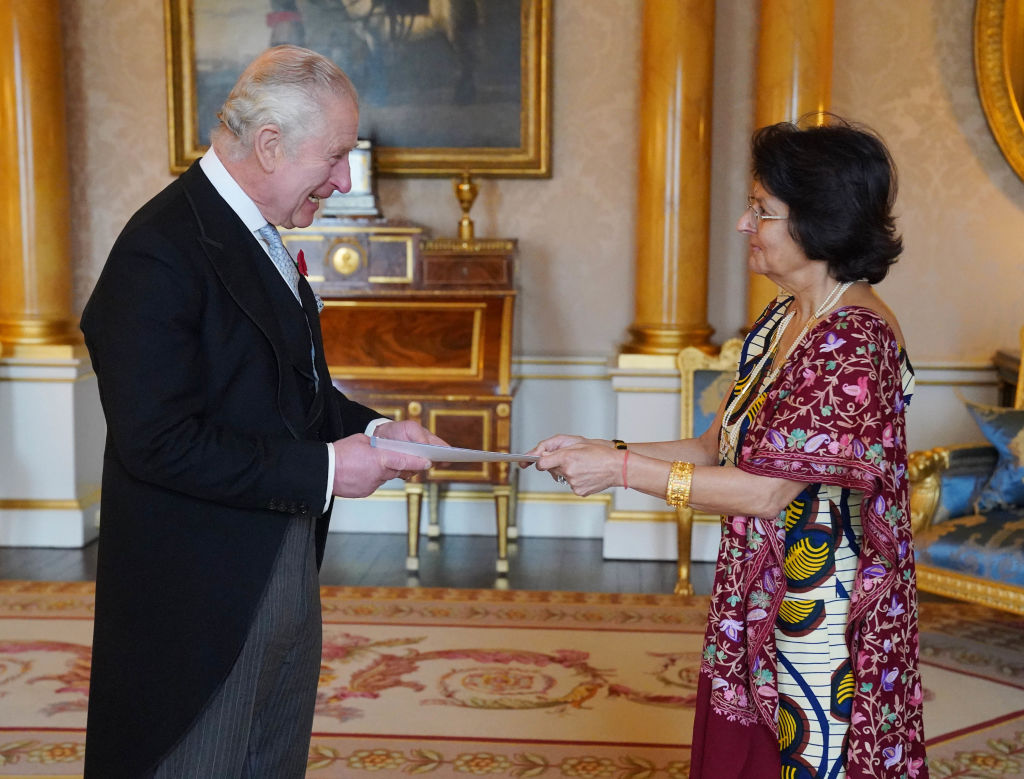 King Charles III receives Her Excellency Nimisha Madhvani, high commissioner for Uganda to the UK, during an audience at Buckingham Palace on November 10, 2022, in London, England. (Photo by Jonathan Brady – Pool/Getty Images)
Follow Us

The monarch, who took over following the death of his mother Queen Elizabeth II in September, held the first ‘credentials’ presentation of his reign over the past few weeks. He met several diplomats from across the globe at Buckingham Palace on different occasions.

🌎 Today The King received the High Commissioner for Uganda and the Ambassador from Kuwait.

📜 Both recently appointed diplomats presented the formal letters from their Head of State stating that they have been entrusted to speak on behalf of their country. pic.twitter.com/9qp12PF3dA

Warm congratulations to H.E. Ms. Nimisha Madhvani for presenting her Letters of Credence to HM King Charles III as the High Commissioner Extraordinary and Plenipotentiary of Uganda to the Court of St. James's.

The Embassy wishes H.E. Madhvani all the best during her tenure. pic.twitter.com/We3fSwSMah

Madhvani was appointed as Uganda’s high commissioner to the UK in December last year and took over the charge in August.

Her appointment came around the time the Ugandan-Asian diaspora is celebrating the 50th anniversary of their expulsions by dictator Idi Amin in 1972.

Born in a business family of Indian-origin which has made significant contributions to Uganda’s economic development, Madhvani herself had moved to the UK as a teenager at the time of the expulsions of the Ugandan-Asians.

She had several postings around the world in her diplomatic career including in the US, Asia, and Europe.

Madhvani’s appointment as the high commissioner to the UK was welcomed by a number of key figures such as Lord Dolar Popat, the British prime minister’s trade envoy to Uganda as well as to Rwanda and the Democratic Republic of the Congo, who had said that Madhvani’s appointment would play a key role in strengthening relations between the UK and Uganda.

Her appointment also came at a time when Ugandan president Yoweri Museveni has invited Asians back to his country and help in its economic progress.

“I am eager to continue to build the UK’s future trade relationship with Uganda – and with Nimisha at the helm here in London it will make that a reality,” Lord Popat had said, adding, “Increased trade between the UK and Uganda will deliver more jobs, increased exports and technology transfers.”

Madhvani attended the funeral of British Queen Elizabeth II in London in September along with Ugandan foreign minister Jeje Odongo and paid her tributes to the late monarch thanking her for the role she had played along with the British government to welcome the Ugandan-Asians who were expelled by Amin in the 1970s.

In the first week of November, the high commissioner was present at the event which was hosted by King Charles III at the Buckingham Palace to commemorate the 50th anniversary of the expulsions.