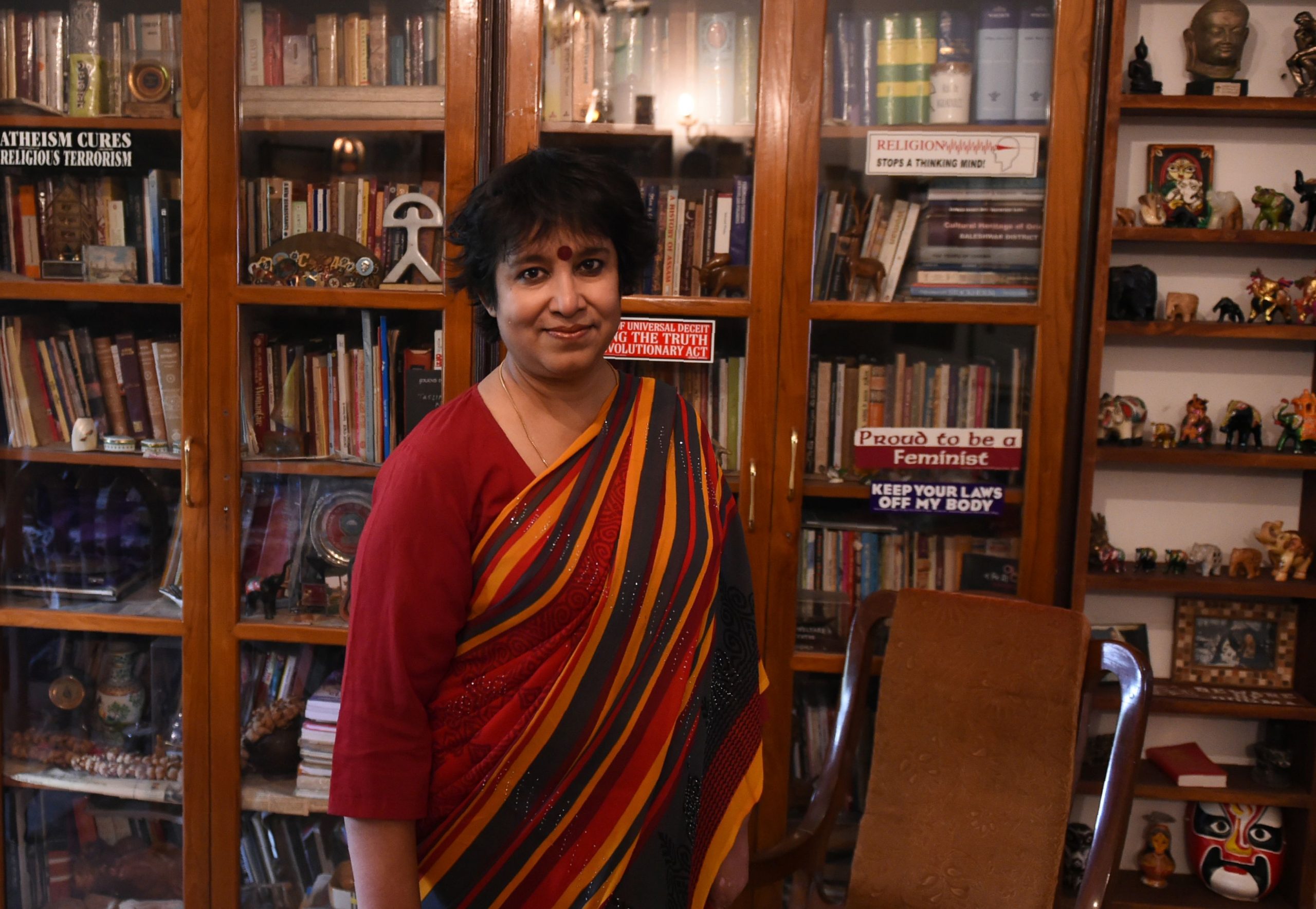 In this photograph taken on November 1, 2016, exiled Bangladeshi author Taslima Nasreen speaks during an interview with AFP at her residence in New Delhi. – It’s 22 years since Nasreen last set foot in Bangladesh, having been forced to flee in fear of her life after tens of thousands of Islamists took to the streets to denounce her writing. Her novels and essays had brought her no shortage of enemies and she upset the government by railing against rights abuses and the treatment of women. (Photo by Sajjad HUSSAIN / AFP) / TO GO WITH AFP STORY: ‘INDIA-BANGLADESH-LITERATURE-NASREEN’ INTERVIEW by Alexandre MARCHAND (Photo credit should read SAJJAD HUSSAIN/AFP via Getty Images)

Banished from her homeland with a bounty on her head, author Taslima Nasreen has been forced to live in exile for more than a quarter of a century — but she refuses to bow to the religious fundamentalists that want her dead.

The fiery 58-year-old Bangladeshi, whose bestsellers include A French Lover and Shodh: Getting Even – warns the recent rise of conservative Islam and its dogmas threatens the modern world.

“In Muslim countries, fundamentalist organisations are getting more powerful — be it Al Shabaab, Al Qaeda or Boko Haram,” Nasreen tells AFP from her home in New Delhi where she has been living in exile since 2011.

“Even if you look at Europe, many Islamist fundamentalists are demanding sharia — Islamic law — in the name of multiculturalism.”

This month tens of thousands took to the streets in Bangladesh and around the Muslim world protesting against France after President Emmanuel Macron said the nation would never renounce its laws permitting blasphemous caricatures.

Tensions have been high since a teacher was killed after showing his class an image of the Prophet Mohammed. Islam forbids such depictions.

Nasreen, who is an atheist, says she agrees with some of France’s approach — such as its controversial ban on Islamic full face veils in public.

“I agree with the ban. Face veils are very dangerous. You need to see who is sitting next to you, [they] could be a killer.”

It is a debate she knows firs-thand — Bangladesh’s Muslim hardliners were enraged by her decision to ditch the traditional Muslim dress including the burkha.

Nasreen, a qualified doctor, rose to prominence in the 1980s with a series of articles condemning the religious and sexual oppression of women in some Asian countries.

Enraged fanatics attacked bookstores selling her work in Dhaka in 1992 and the following year a ‘fatwa’ or an Islamic decree was issued against her in reaction to her novel Lajja (Shame) which depicts the persecution of a Hindu family by Muslims.

With a bounty on her head, Nasreen was forced to flee the country and spent the next few years in hiding — first seeking sanctuary in Europe and then the United States before finally finding long term refuge in India.

She says Bangladesh has been transformed by hardliners, adding that other once moderate nations are at risk — pointing to Turkey’s shift from secularism as a recent example of dramatic societal shift.

“Whoever is critical of Islamic dogmas, they get killed or put behind bars,” she explains.

Although India has been largely welcoming of the polemicist, Nasreen concedes religious intolerance has also been rising in what is the world’s largest democracy.

“India was more liberal before. I liked India for that. But that has changed… now it is quite difficult, criticism is not tolerated easily.

“But not all people are extremists. If India was that bad I could not have lived here.”

She was vocal about female sexuality and rape culture long before the #MeToo movement hit the headlines.

India, Pakistan, and Bangladesh have come under scrutiny in recent years because of the prevalence of violent sexual attacks and the low conviction rates for such crimes.

“Men have to understand rape is not sex,” she insists, recalling how she was sexually assaulted by a famous poet, who she thought was a friend.

The award-winning author, who sometimes goes by Taslima Nasrin, has written more than 40 books, which have been translated in some 30 languages.

One of the bright spots for her was when her memoir, My Girlhood, set against the backdrop of Bangladesh’s Liberation War in 1971, was republished this year and earned rave reviews in international publications.

But Nasreen, who has a Swedish passport, knows she may never be able to return to her country of birth.

“I begged and begged when my father was on his death bed (in 2002) but they didn’t allow me to see him for one last time. They have illegally prevented me from going back to my own country for 26 years.

“The current (Bangladeshi) government patronises fanatic Islamist organisations. Mosques and madrassas people have become so powerful. They will kill me but I will fight for my right to go back.”