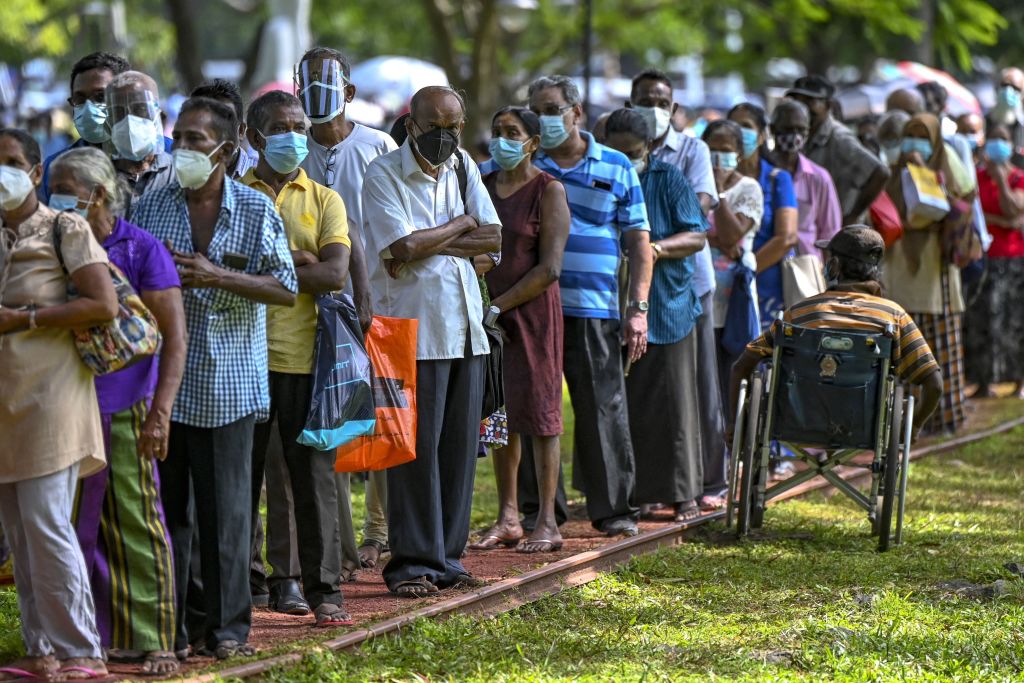 People stand in a queue to receive a dose of the AstraZeneca vaccine against Covid-19 in Colombo on August 5, 2021. (Photo by ISHARA S. KODIKARA/AFP via Getty Images)

The government said state ceremonies and public gatherings were banned until September 1 because of the deepening health crisis.

Public servants had previously been asked to return to work from Monday (1) but the order has now been revoked and bosses are told to decide who should report for duty on-site.

The fresh curbs come after the number of coronavirus deaths and infections in the last week doubled from a month ago.

She said two patients died in front of her and overworked staff were treating people under trees as the hospital could not cope with the influx.

“What we reported about India where people died outside overcrowded hospitals a few months ago is now happening right before my eyes,” she said in a widely shared Facebook post.

Other posts on social media showed bodies piling up at two hospitals outside the capital.

Private gatherings have not been banned but the government has increased restrictions on attendance.

Just over 10 million people out of the population of 21 million have been given at least one jab, while 2.67 million received both as of Thursday (5).

Despite the vaccination campaign, the number of infections has more than doubled to a daily average of about 2,500, with the daily death toll above 80.

Sri Lanka has recorded 4,817 coronavirus deaths to date and almost 325,000 infections, according to official data.

The new wave comes after the government relaxed restrictions in April to allow celebrations for the traditional Sinhala and Tamil New Year.

Regulations were tightened once more in May and eased again on July 10.