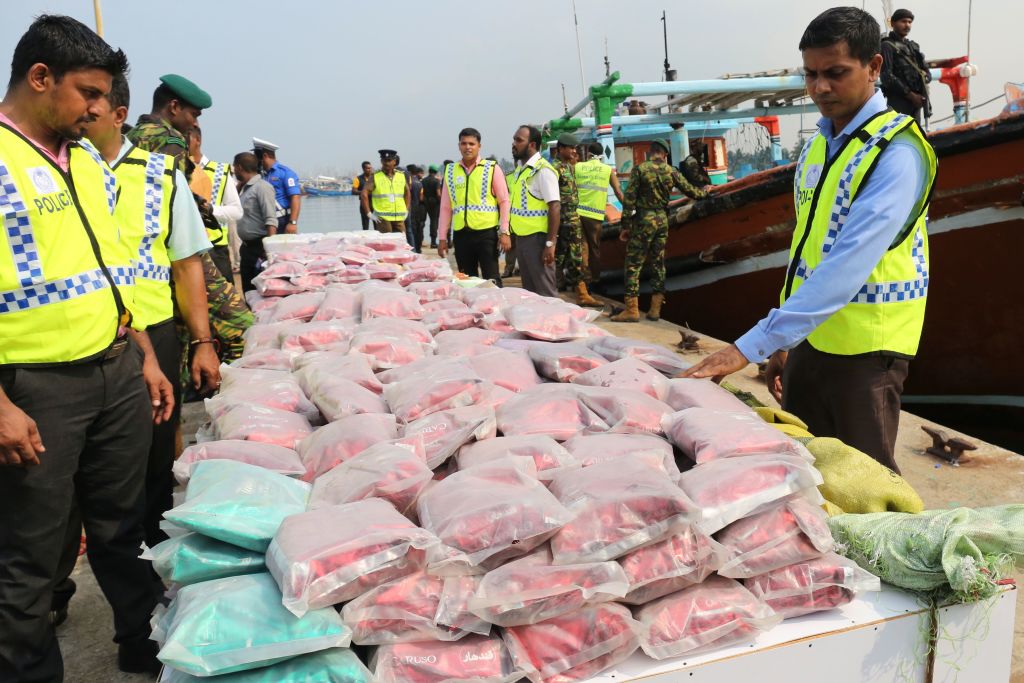 Sri Lankan police personnel stand next to packages containing drugs seized by the Sri Lanka’s Navy at sea, in the Colombo suburb of Dikkowita on March 5, 2020. (Photo by STR/AFP via Getty Images)

Two foreign trawlers packed with over $33 million worth of heroin and crystal methamphetamine were seized in Sri Lanka’s biggest-ever drugs bust at sea, a navy spokesman said on Thursday (5).

The street value of the seized narcotics was estimated by officials to be 6,000 million rupees ($33.5 million).

The vessels, as well as a Sri Lankan fishing boat, were Thursday escorted to a harbour near the capital Colombo.

Sixteen foreign crew and five Sri Lankan crewmen were detained for questioning, Sooriyabandara added. The nationalities of the foreigners were not disclosed by authorities.

“The two foreign vessels were trying to offload the drugs onto a Sri Lankan fishing boat,” Sooriyabandara said.

The foreign vessels, which carried no registration, were intercepted in international waters some 1,100 kilometres (687 miles) from Sri Lanka’s coast.

Sooriyabandara said investigators were checking GPS data on board the vessels to establish the route and the point of origin.

Authorities said initial investigations suggested the Iran-Pakistan coast was the point of origin.

In 2016, the navy arrested 10 Iranians, two Pakistanis and one each from India and Singapore for allegedly trying to smuggle 110 kilogrammes of heroin into the island nation via a trawler.

The country’s previous largest drug haul was in December 2016 when police seized 800 kilogrammes of cocaine on a ship at Colombo’s port from Saudi Arabia’s King Abdullah port.

Authorities believe the Indian Ocean island is also being used as a trafficking transit point.