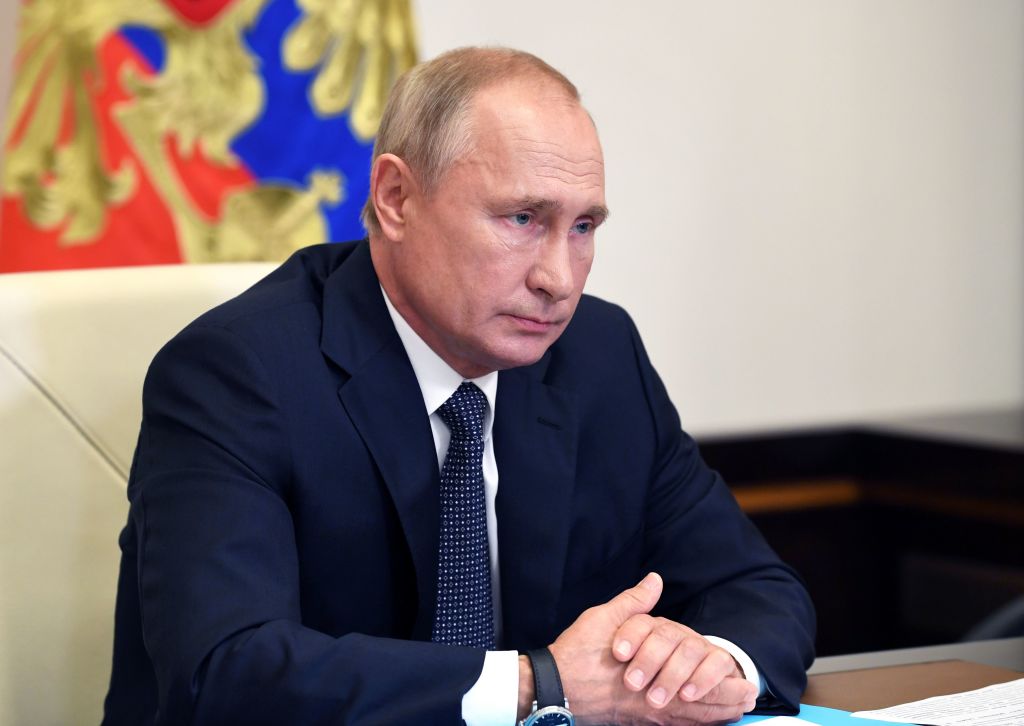 "I know that it works quite effectively, forms strong immunity, and I repeat, it has passed all the needed checks," said Russian President Vladimir Putin, as he chaired a meeting with members of the government via a teleconference call at the Novo-Ogaryovo state residence outside Moscow on August 11, 2020. (Photo: ALEXEY NIKOLSKY/SPUTNIK/AFP via Getty Images)

PRESIDENT Vladimir Putin said on Tuesday (11) that Russia had become the first country in the world to grant regulatory approval to a Covid-19 vaccine, after less than two months of human testing.

Reports said Moscow had already received requests from more than 20 countries for one billion doses of its newly-registered Covid-19 vaccine — named ‘Sputnik V’ for foreign markets, a reference to the world’s first satellite.

“This morning, for the first time in the world, a vaccine against the new coronavirus was registered” in Russia, Putin said during a televised video conference call with government ministers.

The development could pave the way for the mass inoculation of the Russian population, even as the country was in the final stage of clinical trials to test safety and efficacy.

The speed at which Russia is moving to roll out its vaccine highlights its determination to win the global race for an effective product, but has stirred concerns that it may be putting national prestige before sound science and safety.

Putin, however, said the vaccine, developed by Moscow’s Gamaleya Institute, was safe and that one of his daughters “took part in the experiment”.

He added that she had a slight temperature after a second injection, and “that’s all”.

“I know that it works quite effectively, forms strong immunity, and I repeat, it has passed all the needed checks,” said Putin.

“What counts most is for us to be able to ensure the unconditional safety of the use of this vaccine and its efficiency in the future. I hope that this will be accomplished.”

He said he hoped the country would soon start mass-producing the vaccine.

Tatyana Golikova, a deputy prime minister in charge of health issues, said officials “really hope that the vaccine can be produced in September, or even at the end of August or beginning of September”.

“The first category to be vaccinated will be medical personnel,” Russian news agencies quoted her as saying.

The vaccine’s approval by the Russian health ministry comes before the start of a larger trial involving thousands of participants, commonly known as a Phase III trial.

Such trials, which require a certain rate of participants catching the virus to observe the vaccine’s effect, are normally considered essential precursors for a vaccine to receive regulatory approval.

The Moscow-based Association of Clinical Trials Organizations (ACTO), a trade body representing the world’s top drugmakers in Russia this week urged the health ministry to postpone approval until that final trial had been successfully completed.

In a letter to the ministry, it said there were high risks associated with registering a drug before that happened.

“It is during this phase that the main evidence of a vaccine’s efficacy is collected, as well as information on adverse reactions that could appear in certain groups of patients: people with weakened immunity, people with concomitant diseases and so forth,” it said.

Some international experts have also questioned the speed at which Russia approved its vaccine.

“Normally you need a large number of people to be tested before you approve a vaccine,” said Peter Kremsner from the University Hospital in Tuebingen, currently testing CureVac’s Covid-19 vaccine in clinical trials.

“In that respect, I think it’s reckless to do that (approve it) if lots of people haven’t already been tested.”

Duncan Matthews, a professor of intellectual property law at Queen Mary University of London, said news of a potential Covid-19 vaccine was to be welcomed, “but safety must be the priority”.

“The US Food and Drug Administration (FDA) and the European Medicines Agency (EMA) have fast-track approval procedures for emergency humanitarian use and we need to see evidence that Russia is adopting an equally prudent approach,” he said.

The World Health Organization (WHO) said it was “in close contact with Russian health authorities and discussions are ongoing with respect to possible WHO prequalification of the vaccine”.

Prequalification of any vaccine would include “rigorous review and assessment of all required safety and efficacy data”, spokesman Tarik Jasarevic told a UN briefing in Geneva.

More than 100 possible vaccines are being developed around the world to try to stop the Covid-19 pandemic. At least four are in final Phase III human trials, according to WHO data.