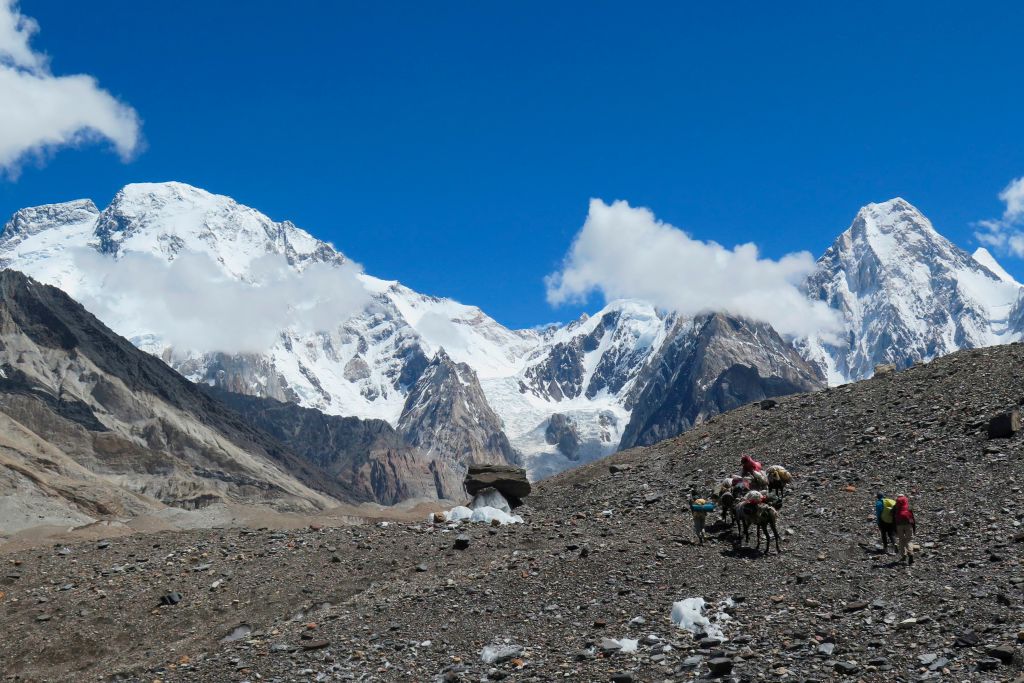 In this picture taken on August 14, 2019, porters and foreign trekkers move with mules towards the Concordia camping site in front of Broad Peak (L) and Gasherbrum IV (R) at Baltoro glacier in the Karakoram range of Pakistan’s northern Gilgit region. Northern Pakistan is home to some of the tallest mountains in the world, including K2, the world’s second highest peak. Mountaineers have long been drawn to the area by the challenging climbs. (Photo by AMELIE HERENSTEIN/AFP via Getty Images)

A SOUTH Korean Paralympian was missing on Tuesday (20) after falling from the world’s 12th tallest mountain in northern Pakistan, the Alpine Club of Pakistan said.

Kim Hong-bin, 57, who represented his country in Alpine skiing at the 2002 Winter Paralympics in Salt Lake City, had reached the top of the 8,047-metre (26,400 foot) Broad Peak with other climbers on Sunday (18), but met bad weather on the way down, the club said.

Kim fell into a crevasse on the Chinese side of the mountain, part of the Karakoram range on the border of Pakistan and China.

“The rest of the group looked for him, but could not stay up there, and had to come down,” Karrar Haidri, head of the Alpine Club, said. “A search operation is currently being put together, and when the weather permits, helicopters will join the effort.”

Broad Peak was the final summit in Kim’s quest to climb the world’s 14 tallest mountains, called the “Eight-thousanders” because all are taller than 8,000 metres. He climbed Mount Everest in 2007.

Kim lost all his fingers to frostbite in 1991 while climbing Mount Denali in Alaska.

“Hong-bin is now the first person with a disability to climb all eight-thousanders in the world,” Haidri said.

After losing his fingers, Kim took up Alpine skiing, and also competed at the national level in paracycling.

Kim also founded an organisation that taught mountain climbing and other outdoor sports to children with disabilities.