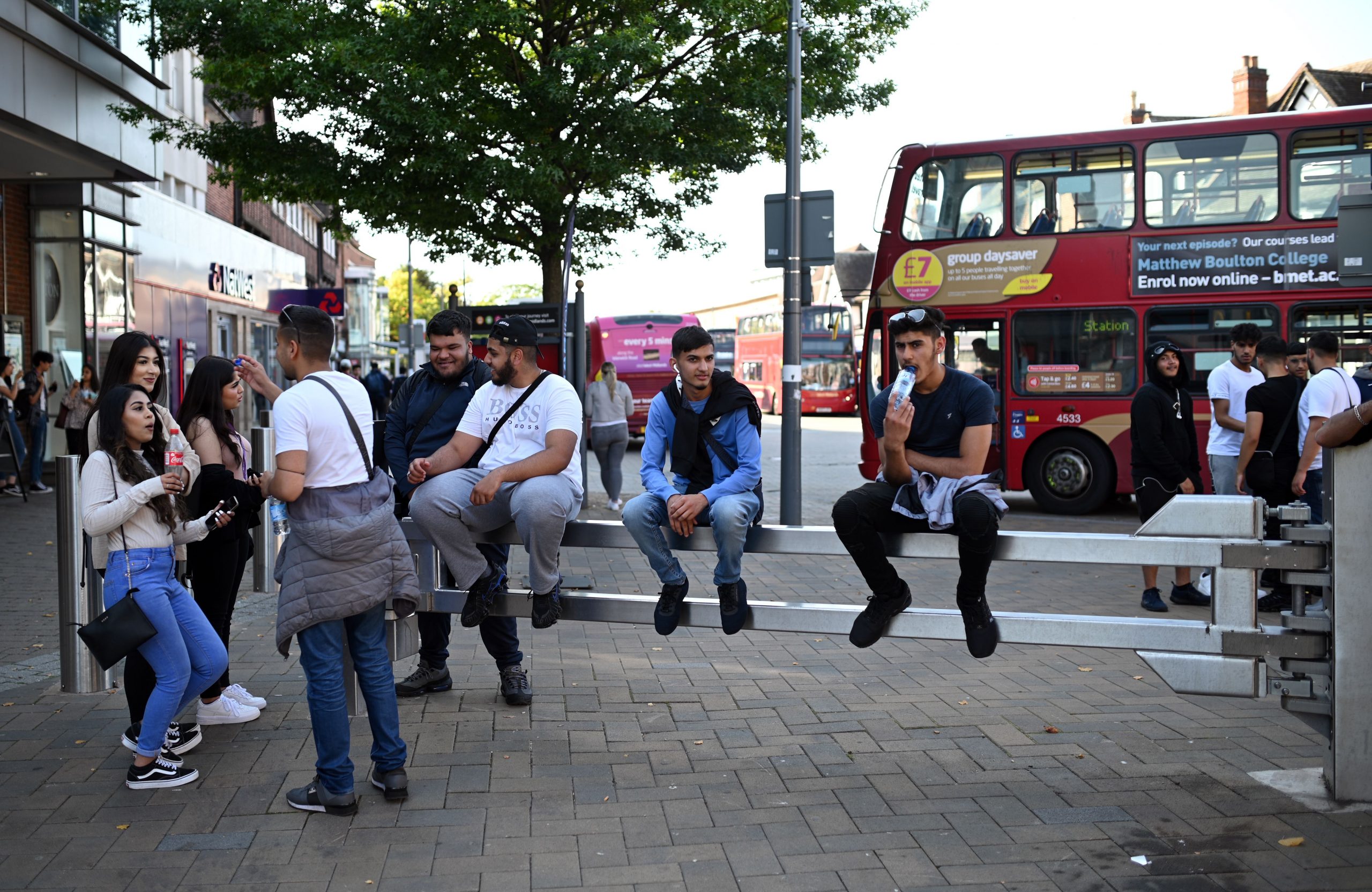 A group of people hang around a pedestrianised street in Solihull, central England on September 14, 2020 after the British government imposed fresh restrictions on the area after a rise in cases of the novel coronavirus. – Authorities in Britain’s second city of Birmingham announced new coronavirus restrictions Friday as the nation’s viral reproduction rate, or R number, exceeded 1.0 for the first time since March. (Photo by Oli SCARFF / AFP) (Photo by OLI SCARFF/AFP via Getty Images)
Follow Us

Minority ethnic groups in general and South Asians, in particular, had a higher risk of testing positive for SARS-CoV-2 and of COVID-19 related hospitalisations, intensive care (ICU) admissions and deaths during the second wave of the pandemic in the UK compared to the first, according to a new observational study of 17 million people.

Led by the London School of Hygiene & Tropical Medicine (LSHTM), the study published in the medical journal ‘Lancet’ on Friday accounted for a large number of explanatory variables such as household size, social factors and health conditions across all ethnic groups and at different stages of COVID-19, from testing to mortality.

“South Asian groups remained at higher risk for testing positive, with relative risks for hospitalisation, ICU admission, and death greater in magnitude in the second wave compared to the first wave,” the study finds.

It found that compared with the first wave last year, the relative risk for testing positive, hospitalisation, ICU admission, and death were smaller in the pandemic second wave earlier this year for all minority ethnic communities compared to white people, with the exception of South Asian groups – covering Indians, Pakistanis and Bangladeshis.

“Despite the improvements seen in most minority ethnic groups in the second wave compared to the first, it’s concerning to see that the disparity widened among South Asian groups,” said Dr Rohini Mathur from LSHTM and the study’s lead author.

“This highlights an urgent need to find effective prevention measures that fit with the needs of the UK’s ethnically diverse population,” she said.

After accounting for age and sex, social deprivation was the biggest potential explanatory factor for disparities in all minority ethnic groups except South Asian.

In South Asian groups, health factors such as BMI, blood pressure, underlying health conditions played the biggest role in explaining excess risks for all outcomes. Household size was an important explanatory factor for the disparity for COVID-19 mortality in South Asian groups only.

“In light of emerging evidence that minority ethnic groups are less likely to take up the COVID-19 vaccine, co-designing culturally competent and non-stigmatising engagement strategies with these communities is increasingly important.”

These GP records were linked to other national coronavirus-related data sets for the first and second waves of the pandemic – including testing, hospital data and mortality records. Ethnicity was self-reported by participants in GP records and grouped into five census categories (white, South Asian, Black, other, mixed) and then a further 16 sub-groups.

“Minority ethnic groups in the UK are disproportionately affected by factors that also increase the risk for poor COVID-19 outcomes, such as living in deprived areas, working in front-line jobs, and having poorer access to healthcare,” notes Dr Mathur.

“Our study indicates that even after accounting for many of these factors, the risk for testing positive, hospitalisation, ICU admission and death was still higher in minority ethnic groups compared with white people in England.

“To improve COVID-19 outcomes, we urgently need to tackle the wider disadvantage and structural racism faced by these communities, as well as improving access to care and reducing transmission,” she said.

The authors caution that there are some limitations to the study including an inability to capture all potential explanatory variables, including occupation, health-related behaviours, and experiences of racism or structural discrimination.

They call for improving the completeness of ethnicity recording in health data to further support the conduct of high-quality research into addressing health inequalities for COVID-19 and beyond.

The study, believed to be the largest of its type, was funded by the UK’s Medical Research Council and conducted by scientists from a group of universities including LSHTM and the University of Oxford, along with the National Institute of Health Research.